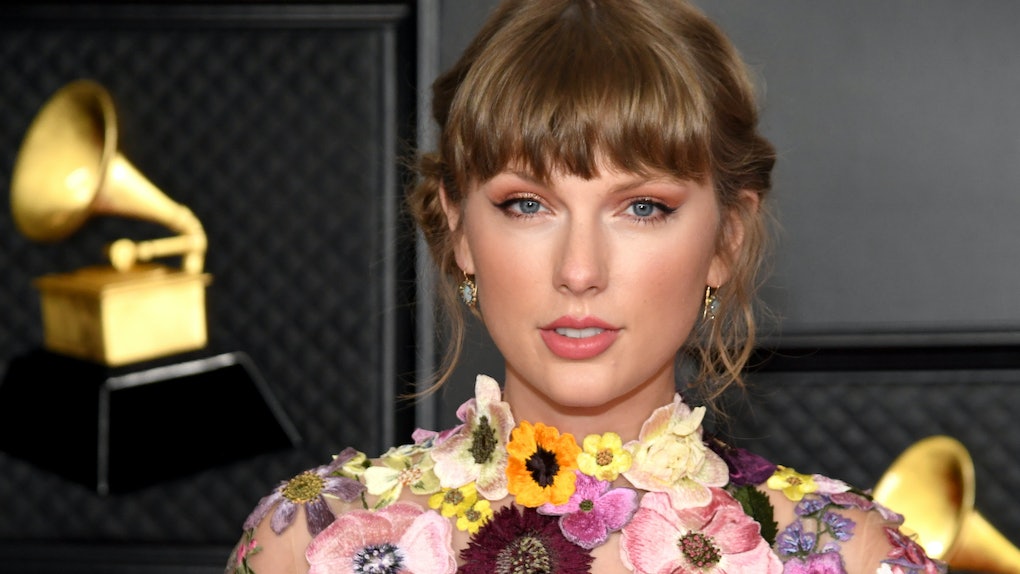 Taylor Swift had a big 2020, but her 2021 is shaping up to be just as busy. Between dropping two full-length albums, re-recording old songs, and sharing her documentary, the 31-year-old had one of the busiest quarantines possible. Now at the 63rd annual Grammys, Swift's look is a stunning embodiment of all her hard work. Luckily, the singer is nominated for six categories and has a performance scheduled for the evening, so both you and I will have plenty of chances to take in her beautiful outfit.

Swift hasn't appeared at the music awards show in five years, and clearly, she dressed to impress with her return. As someone who's so defined by her different musical eras, this look is Folklore to the max. The 10-time Grammy winner wore a metallic Etro gown that brought the best of Cottagecore and Princesscore to life in the best way for her performance, which was a medley of "Cardigan," "August," "Willow," and more of her recently released songs. Swift was also pictured on the red carpet wearing a short, turtleneck Oscar de la Renta dress covered in multi-colored floral appliqués. For both, her wavy hair was pulled into a loose updo, and her beauty look featured neutral makeup. Very, very folklore indeed.

Swift started going to the Grammys in 2008 when she was first nominated for Best New Artist. Back then, she went with an Ophelia-esque lilac dress that flowed into a pool of flowers. Since then, floor-sweeping gowns have been her go-to, though she's played with slits, colors, and peek-a-boo mini skirts to create classic yet edgy, modern looks. Her last Grammys 'fit from 2016 might have been her boldest to date. The orange band top and sweeping fuchsia skirt displayed her midriff, and the funky colors made her one of the most vibrantly dressed of the night.

Sadly, the ongoing COVID-19 pandemic caused Swift to cancel her much anticipated Lover Fest tour, but her performance will at least give fans a glimpse at what they can expect from Folklore Swift IRL. And, after not seeing any live musical performances in over a year, I can't put into words how much I needed it.