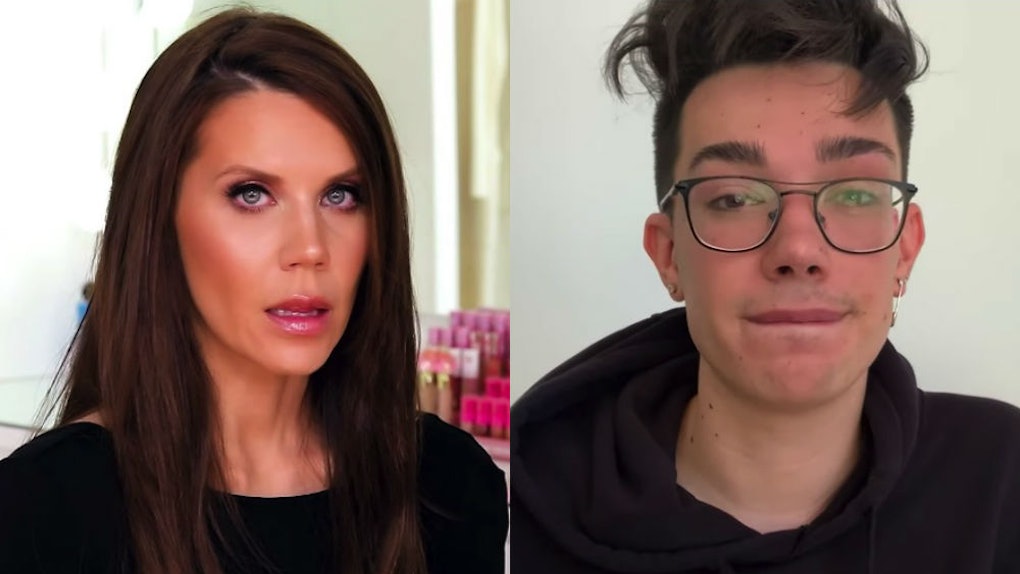 Ever since veteran YouTube beauty vlogger Tati Westbrook posted her "BYE SISTER" video severing ties with James Charles, nothing has been the same in the YouTube beauty-verse. In her emotional video, Westbrook laid out the reasons she was cutting Charles out of her life, claiming he lied about the circumstances that led to him posting a SugarBearHair ad on his Instagram (a direct competitor of her vitamin brand, Halo Beauty) and accusing him of attempting to "manipulate someone's sexuality" on multiple occasions. Elite Daily reached out to Charles' team previously for comment on Westbrook's claims, but did not hear back by the time of publication. Since then, Charles issued a video apology addressing Westbrook's video, but the damage was done. The beauty-vlogger community had taken sides and fans had too, with Westbrook gaining followers as Charles lost around 3 million. Now, Tati Westbrook's first video since the James Charles' drama is asking everyone to stop the hate being directed at Charles, because that was not what she was aiming for when she posted "BYE SISTER."

As mentioned, the backlash following Westbrook's "BYE SISTER" video was swift, with a majority of netizens seemingly taking Westbrook's side in the drama and effectively "canceling" Charles. But Westbrook also garnered some skepticism from critics who did find Westbrook's concerns about Charles' behavior valid, but questioned Westbrook's motives for finally speaking out. They wondered why, if Charles' consistent inappropriate behavior was the real motivation behind her video, it took him posting a SugarBearHair ad to finally cut him off. Simply put: Is it really just all about the Benjamins like many critics of the YouTube beauty community think?

Well, Westbrook seemingly aimed to answer that question in her first video since all the James Charles drama. In her video titled "Why I Did It..." posted on May 16, Westbrook says she thought she would be the one who faced the most backlash after posting "BYE SISTER."

"When I made that video, I thought that I would be the one to take the hit," she explained. "I thought I was going against millions and millions of subscribers."

Westbrook goes on to stress that she still loves Charles and claims she only posted "BYE SISTER" in a last-ditch effort to help him grow.

"I want to share with you guys that I do really want the hate to stop," she said. "I want the picking sides and the abusive memes and the language and all of that. I really hope on both sides it can stop. That is not why I made the video. And I feel like I wanted to share with you guys why I did. This was really a wake-up call and it was me trying to reach someone who I found completely unreachable and I had been trying to deliver the same message so many times, because this wasn't just about one thing."

In the end, Westbrook insists she did what she did because she thought it was the only way to make Charles' address his behavior and take accountability. "You need to step into being an adult and being held accountable," she said.

You can watch the whole video down below:

Whether or not Westbrook and Charles ever reconcile, Westbrook says she doesn't think Charles' career is over.

"I don't think he's canceled," she shared. "I think he needs some help and I think he needs better people around him and I know I will never be that person again. When someone is called out on their crap, they can do a few different things. They can change and make a great comeback and really look at what they are doing that is not right and fix it, and that's all I hope for."

Westbrook claims that she's made an attempt to meet up with Charles at YouTube headquarters to hash everything out in person, but it's unclear if that will ever happen, as Charles has yet to respond to Westbrook's latest video.