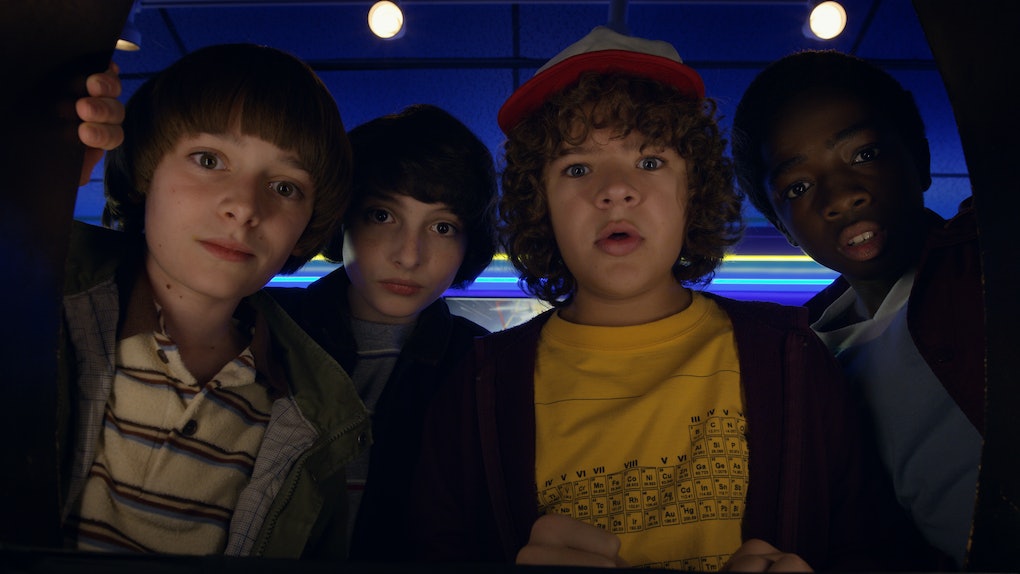 Casting child actors is a difficult process. There are shows out there that make it look easy, like Game of Thrones, which spawned Sophie Turner and Maisie Williams into the stratosphere. But for every Bella Ramsay playing Lyanna Mormont, there's a Jake Lloyd in Star Wars: The Phantom Menace. Blessedly, Stranger Things has been extraordinarily lucky in its casting. On Beyond Stranger Things, a new after-show, some of the Stranger Things kids' audition tapes are revealed, with explanations of why that footage won them the parts.

In some cases the footage is very obvious as to why the kids were cast. Noah Schnapp, for instance, just looks every inch the vulnerable child in his footage of asking Jonathan "Am I weird?... I dunno. Sometimes it feels like I'm stuck."

In others, the kid's own personality overshadows the actual performance. Finn Wolfhard, for instance is a total clown in his tape, which starts out with the kids' announced name, age, and height. Wolfhard announced boldly and brassily that he is under the weather, to shouts of laughter from the room.

Most striking perhaps is "Millie Brown" who has a long head of hair in her original tape, which looks to be bone-straight at the time. (Shaving it off and making it short is probably responsible for the curls.)

Finn Wolfhard said Brown actually looks a bit like Susan Sarandon in her audition, which was very sweet of him.

On the other hand, the boys, it turns out, didn't audition for their individual parts. Caleb McLaughin, Gaten Matarazzo, and Wolfhard are all seen reading the same speech, Mike to Nancy, from Season 1, telling her how Eleven actually made the Millennium Falcon fly and revealing the existence of the girl in their basement.

By the way, of the three, Finn is the only one who is dramatic about telling Nancy to open her eyes. One can see why he's the one that got the "lead" role in the first season, and also got cast in the remake of Stephen King's It.

Of course, what some take from the after-show is that you can audition by iPhone from the comfort of your bed. (Wolfhard, unlike the others, is not in the studio up against a white wall being taped by an agent, but is in fact at home, auditioning from his bedroom.)

Gaten Matarazzo's lisp is also more pronounced in the audition tape than it even is in the first season, giving us a good hint why the Duffers chose to cast him as Dustin. Matarazzo, for the record actually does have cleidocranial dysplasia in real life — that wasn't a condition Dustin had in the original script. Dustin apparently originally just lisped without there being an actual medical reason behind it. Once the Duffers met Matarazzo, they wrote in that detail as the explanation, as well as Matarazzo's ability to twists his arms around as a result of the disorder, which affects both teeth and bone growth.

The Duffers admit that though writing Season 2 was daunting, having these amazing actors and a better idea of their abilities in the second season is part of what made some scenes easier. It also made writing new characters in less difficult as well.

One of the more famous stories out of Season 1 was that Steve Harrington was supposed to be the jerk of a guy, the human foil to go along with the Demogorgon antagonist. Instead, actor Joe Keery came in and read for the part; he was so charming and personable that by the end of the season, he was as much a hero as everyone else. This year, the idea was to have a second go at that original idea of a high school "king of the jocks" jerk who wouldn't be nearly as redeemable, which is how Billy came about.

The Duffer Brothers also talk about Goonie's actor Sean Astin's tape. (Yes, he too made a tape.) They don't show it, but much like Joe Keery, according to the Duffers, Astin too made a stereotype character so damn likable that it changed the direction of the Bob and made him more of a hero.

The moral of all of this? Audition by tape.