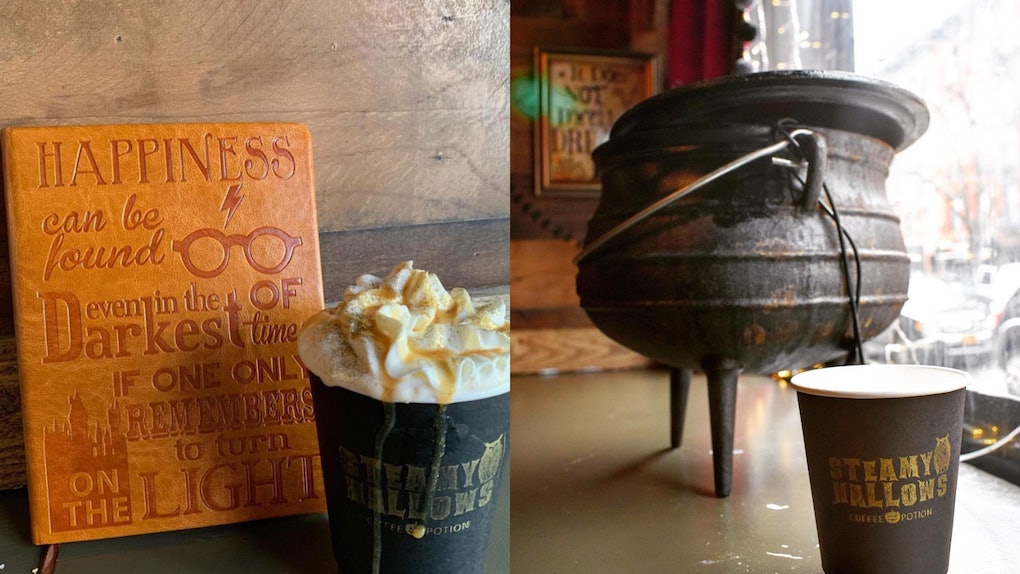 If you read the Harry Potter books growing up, you probably know what it's like to want to insert yourself in the magical world of witches and wizards. Did you ever dream about enjoying a cup of tea at Madam Puddifoot's, or popping into the Three Broomsticks for some Firewhisky? Perhaps you let your imagination run wild thinking about all the sweet treats at Honeydukes Sweetshop? Well, a pop-up in New York City wants to make all your Harry Potter-themed dreams come true. Steamy Hallows' Harry Potter coffee shop in NYC will give you the most magical caffeine boost, even if you're a regular ol' muggle.

Steamy Hallows, which opened its NYC location doors in February 2019, boats an impressive menu of wizarding world-themed food and drinks. But the fun doesn't stop there. Steamy Hallows is an immersive Harry Potter experience with witch and wizard-themed decor, like steaming cauldrons and crystal balls, Harry Potter-themed quotes and art, and a storefront that could rival any in Hogsmeade. The café has one location in NYC's East Village and another in Kingston, Pennsylvania, so if you live anywhere on the East Coast, it may be worth a trip to New York or Pennsylvania ASAP.

Steamy Hallows also serves a version of the Harry Potter universe's most classic drink, Butterbeer. Steamy Hallows' Butterbeer latte is topped with edible sparkles for the most magical sip around. I mean, just look at this beauty — it's as Insta-friendly as it is tasty.

The Butterbeer-themed fun doesn't stop there. Steamy Hallows also serves Butterbeer cookies that have the same dash of glitter as the latte and can be enjoyed alongside the Butterbeer latte or all by themselves.

If you're feeling less like a muggle and more magical upon stepping into the shop, you might also want to try Steamy Hallows' Basic Witch, a heavenly sea salt caramel latte that will satisfy all your witchy cravings.

Even if you're not a huge coffee drinker, it's worth getting a drink from Steamy Hallows for the cup alone. The coffee shop's custom cups are dark with gold lettering that spells out "Steamy Hallows" in a very witchy font. Under the coffee shop name, the cup reads "coffee potion" with a picture of a smiling pumpkin.

Steamy Hallows told Elite Daily that if customers keep coming, the pop up plans to stay open but if not, the shop will close. TBH, you should probably stop what you're doing, put on your Harry Potter house colors, get on your broom, and head to Steamy Hallows like its existence depends on it — because it kind of does.