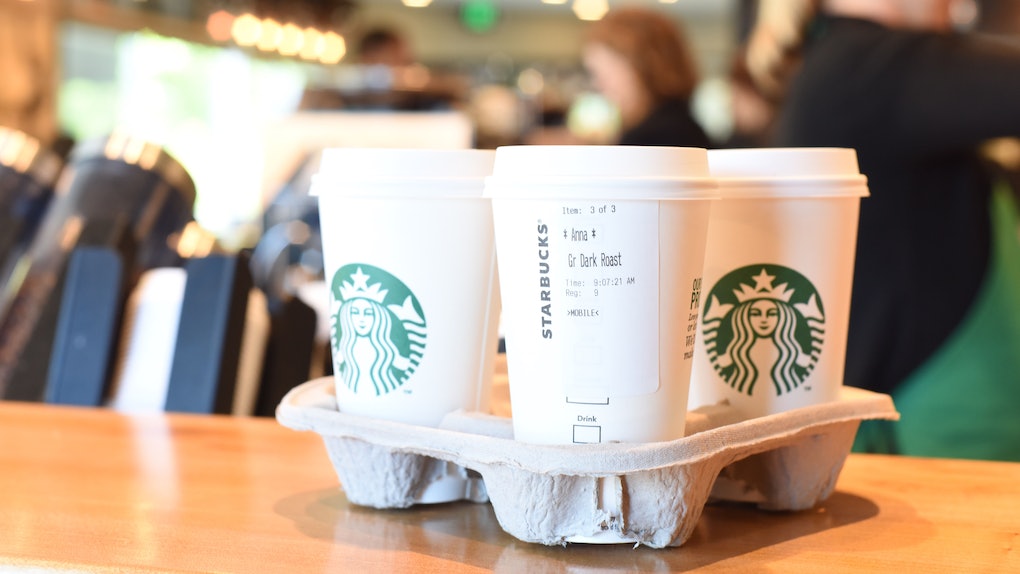 On the heels of Starbucks' announcement that it will be opening its largest Reserve location ever on Chicago's Magnificent Mile on Nov. 15, the coffee giant is revealing that it also plans to provide an alternate option for customers who want to streamline the process of getting their coffee. According to CNN Business, Starbucks is opening pickup-only stores in select locations in the future, and the new concept is mixing brick-and-mortar storefronts with the ease of mobile ordering. Here's how it will reportedly work. Elite Daily reached out to Starbucks for comment on the reports, but did not hear back by the time of publication.

Per a Thursday, Sept. 19 story from CNN Business, the Seattle-based coffee corporation has begun work on a new model of Starbucks storefronts that appears to be going in the opposite direction of the Reserve Roastery locations that it's been debuting in recent years. While the Reserve Roasteries provide more of a comprehensive eating and drinking experience with the addition of all-new food menus and alcoholic beverages, the store's new pickup-only stories cut out all the extra stuff in favor of simplicity and yes, the coffee you know and love.

According to the publication, Starbucks is currently working on bringing its first Pickup location to life at Penn Station in New York City, which means it's about to get a whole lot faster to get your cup of joe on the go. While Starbucks didn't get back to Elite Daily's email inquiring about what customers can expect from the experience, it sounds like it'll be "a streamlined store experience for Starbucks Rewards members who order and pay with our app," per a statement shared with CNN Business.

Unlike regular Starbucks locations which often feature areas for consuming your beverage and/or any snacks you choose to purchase, Pickup stores are meant for strictly on-the-go customers.

"This is unlike any Starbucks you've seen before—a space devoted entirely to mobile orders, with no obstacles standing between you and your coffee," the company reportedly told CNN Business. Starbucks didn't elaborate on exactly what "obstacles" you won't be seeing at the Pickup locations, but I wouldn't be surprised if the new storefront is cashless (especially if you need to order on the app to use the space) and if lines are a thing of the past at these locations. In short, these new Starbucks concepts probably won't be the best for hanging out with friends or congregating with coworkers, but they'll probably be great if you're trying to grab a cup of coffee as quickly as possible.

At this time, there's no telling when you can expect to visit the Penn Station location, and Starbucks didn't immediately get back to Elite Daily about when it's expected to open and if the company plans to roll out the concept in other cities in the future. However, considering that Starbucks successfully launched a similar version (dubbed Starbucks Now) in China back in July, I wouldn't be surprised if it comes to fruition sooner than later and I'd keep an eye out for any new updates in the coming months.