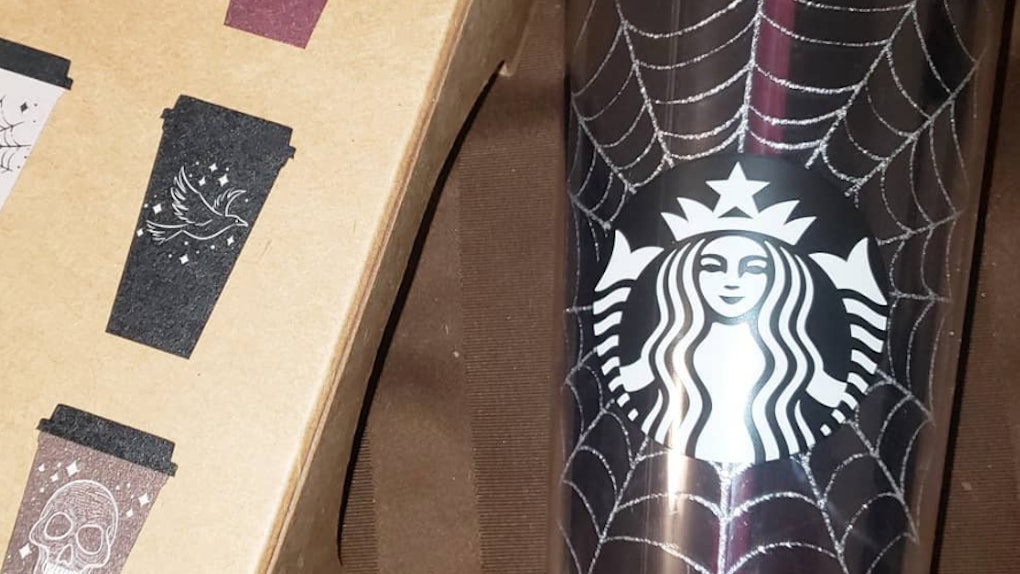 Fall might still be a few days away, but that hasn't stopped retailers and fans alike from embracing the Halloween spirit a few months early. There's been no shortage of spooktacular decorations, treats, and sips to help you channel your inner witch and make your home as festive as possible, and Starbucks' Halloween reusable hot cups are just one more way to bring some simultaneously scary yet adorable details into your daily routine. Get ready to dress up your PSL in a not-so-basic tumbler that even the Sanderson sisters would approve of, because you'll need, not want, this Halloween-themed set in your life.

Now that the temperatures are starting to drop, I've been swapping out my cold brew and iced Frappuccinos in favor of Pumpkin Spice Lattes and other cozy sips. If you're a Starbucks regular, you probably are already a fan of the coffee giant's rotating lineups of seasonal cups to keep your drinks cold, hot, and, most importantly, looking Instagramable AF. Back in late April, you might remember when Starbucks released a brand new line of reusable cold cups that promised to keep all your summertime sips chilled while changing colors into an ombre tone when they came into contact with cold liquid. Unsurprisingly, the vibrantly-hued tumblers quickly sold out, but Starbucks' new Halloween line might be even more Insta-worthy than its predecessors.

In addition to a studded black tumbler, which the company debuted in late August, Starbucks is rolling out a set of six reusable cups that'll keep your drinks warm in the most festive way possible. According to an Instagram post shared by blogger @OhTarget, it looks like you can expect tumblers decked out with designs of black cats, cobwebs, butterflies, pumpkins, birds and skulls. The seasonal cups — which are reportedly retailing for about $11.95, per a Starbucks rep — have already been spotted at Starbucks and Target locations, although they don't appear to be on sale on the company's websites. I did some sleuthing online, and also found the set of six hot cups for sale on Mercari, eBay, and Poshmark ranging from about $25 to $55.

Unfortunately, there's no telling whether your local Starbucks storefront or Target still has these spooktacular hot beverage tumblers in stock. However, a Starbucks rep confirmed that Elite Daily that the company will be selling the 6-pack of hot cups as well as a 24-ounce Glitter Web Cold Cup and a Spooky Plastic Cold Cup this season.

If they do sell out, I wouldn't be surprised if the coffee company takes a leaf from its spring lineup and chooses to restock the limited-time tumblers throughout the season. Worst case scenario, it looks like you can still purchase the Halloween cups on several resale sites, albeit at a premium price, if you are willing to pay a little more to get your hands on these bad boys ASAP.

Starbucks' new set of six hot beverage tumblers joins the matte black studded cup that the company debuted back in late August as well as the two cold cup options, so it sounds like you'll have no shortage of spooky vessels for your fall drink of choice when the seasons officially change.