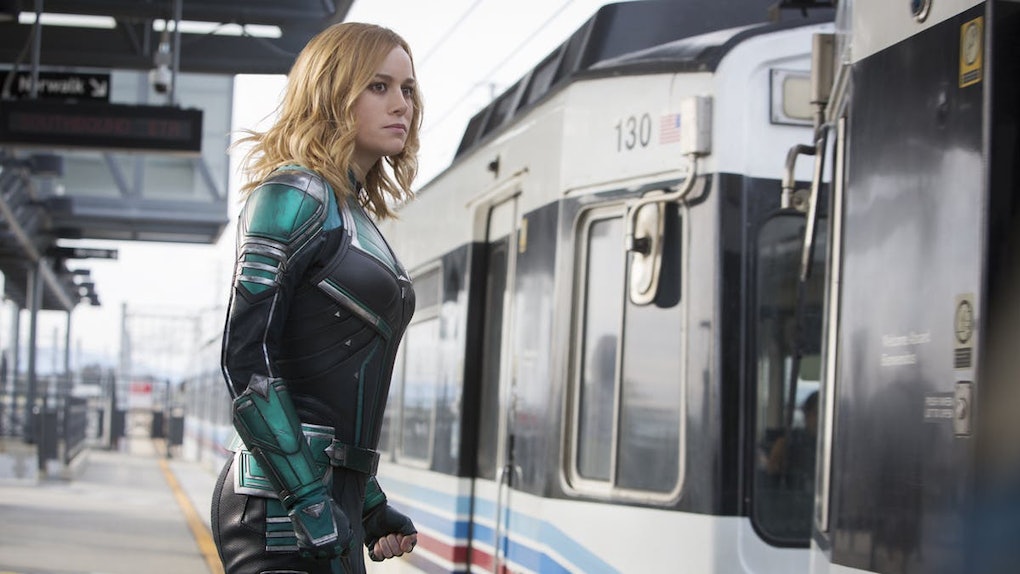 When Stan Lee passed away back in November, fans were heartbroken. Stan Lee was not just a fixture in the comic book universe, but the Marvel Cinematic Universe as well, making cameos in every film. Before he passed, Lee had filmed cameos for a few final movies, including Captain Marvel, the 1990s set first female-led film from the studio. Stan Lee's cameo in Captain Marvel was a double whammy too. Not only because it's the first one since his death, but because it was the truest to life one so far.

Stan Lee has played a variety of characters over the 20+ films of the MCU. From a bus driver to an alien, Lee has appeared in a variety of guises, usually with a single spoken line. The "Marvel Studios" opening to Captain Marvel, celebrated these roles, replacing the usual clips from the different franchise hits with clips of "Stan The Man" and his tiny walk-on cameos over the last decade.

The special reimagined opening ended with "Thank You Stan Lee," making Captain Marvel also a tribute to the creator as the first MCU film to be released since his passing. Over opening weekend, reports surfaced that audiences applauded and cheered every time it ran.

However, it wasn't the only Stan Lee reference. There was also the one in the film, which Lee recorded before he died. As usual, he appeared during a crowd scene as one of the many citizens of Earth who has a brush with the superheroes in question. In this one, it was during the train scene, where Vers, having only just arrived on Earth, stalks a Skrull shapeshifter. As she walks through the train car, with humans staring at this strangely dressed lady, Lee's voice can be heard muttering from behind a script. He then looks up and sees Vers. They share a nod, almost as if they know each other. Then he goes back to studying his script and reciting his lines.

This is no ordinary cameo. First of all, Lee and the leading characters never "know" each other like that in his cameos. Then there was the script he was holding. It's a script for a film that came out in 1995: Mallrats. Written and directed by Kevin Smith, it was Smith's second film ever after the surprise hit of Clerks the year before.

Except, here's the thing about the line Lee was reading from the script over and over. It was "Trust me, True Believer."

That is a line in Mallrats. It was spoken by Stan Lee.

Stan Lee is in Mallrats. Until the MCU began, it was his most significant movie role ever. Moreover, Stan Lee is playing himself in the film. The hero of the film, Brodie, runs into Lee just before the climax of the film, and Lee gives him advice on life and how to win his girl back.

Lee recognizes Captain Marvel when she walks through the train car because he's playing himself.

Of course, this brings up questions of continuity and how Lee could create Carol Danvers before she existed. Is there a Marvel Universe in the Marvel Cinematic Universe?

If not, what is Stan Lee famous for? Deep thoughts.