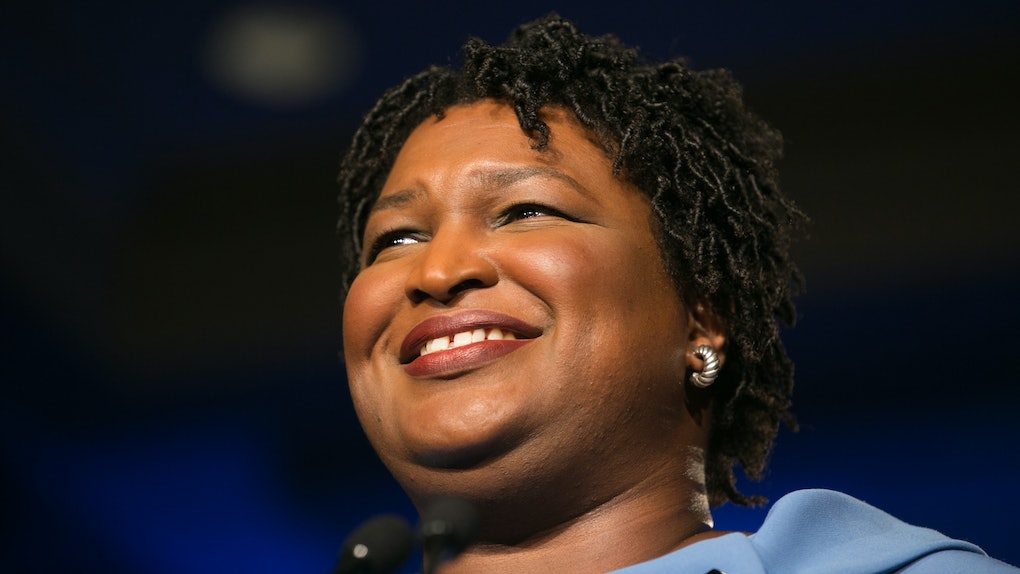 Since last week, four women have come forward to share that former Vice president Joe Biden made them feel uncomfortable by touching them without their permission. On Wednesday, April 3, Biden spoke out in response to these allegations, saying that he will be "more mindful" of respecting women's personal space. While some people are still skeptical of Biden's answer, Stacey Abrams' response to the Joe Biden allegations is nothing but supportive. Elite Daily reached out to representatives of Biden for comment on Abrams' statement as well as for further comment on the allegations, but did not hear back in time for publication.

On Friday, March 29, former Nevada state legislator Lucy Flores penned a piece in The Cut claiming that former vice president Joe Biden allegedly kissed her on the back of the head without her consent. Since Flores came forward, three other women have stated that Biden had touched them without permission in a nonsexual way, that nevertheless made them uncomfortable. on April 3, Biden finally addressed these allegations through a video shared on Twitter, in which he acknowledged his actions and said he would be more mindful in the future. While some are still criticizing Biden's actions, past Georgia gubernatorial nominee Stacey Abrams discussed the matter on MSNBC’s Morning Joe segment on Thursday, April 4, in which she supported Biden's response to the allegations. She said,

I think the vice president has acknowledged the discomfort that he's caused. He's created context for why that is his behavior and he has affirmed that he will do something different going forward. And I think that’s what we should be looking for.

As the 2020 presidential election draws closer, there's been speculation as to whether Biden will announce his bid. On March 28, The Hill reported that Biden holds a double-digit lead over other Democrats running in the upcoming presidential election. However, Biden has yet to confirm whether he will run for president.

In addition, there had been reports that Biden was considering asking Abrams to be his running mate as vice president. However, it looks like those reports are inaccurate, because Abrams revealed to that she and Biden hadn't discussed the possible presidential bid. During an appearance on MSNBC on April 4, Abrams stated that she wasn't interested, and gave a strong reason why. She said,

During the 2018 November midterm elections, Abrams ran for governor of Georgia, but lost by a narrow margin against Republican opponent Brian Kemp. Since the loss, Abrams has openly spoken about the problem of voting suppression in the United States, and contested the results of Georgia's midterm election. Nevertheless, Abrams has gained nationwide recognition from the public, and delivered a moving rebuttal to the 2019 State of the Union address on Tuesday, Feb. 5.

The 2020 presidential election will be here before we know it, but it's still up in the air whether Biden will announce his bid. Either way, we'll have to wait and see if the conversation of respecting women's personal boundaries becomes a forefront issue.