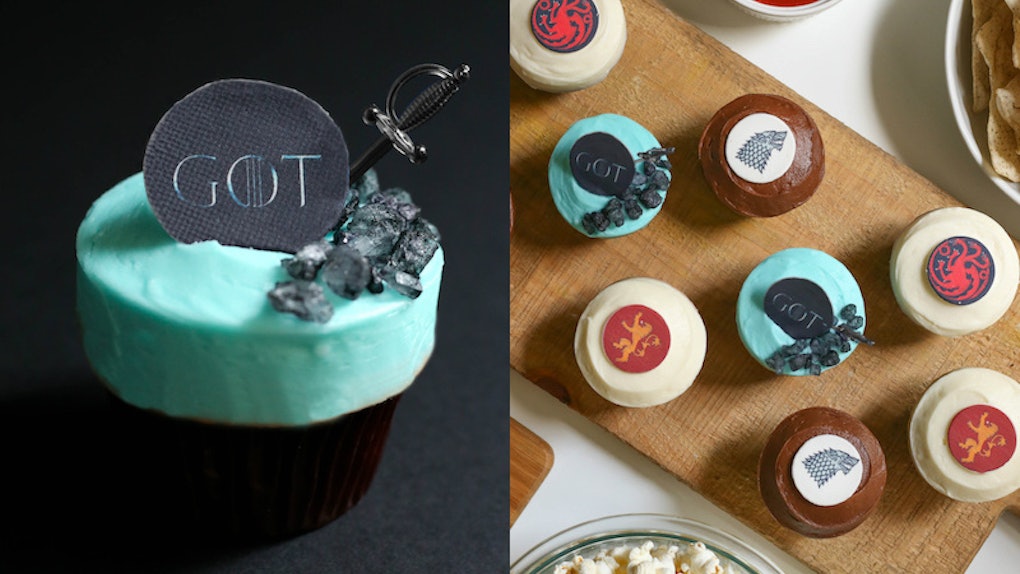 If you watch Game of Thrones (and unless you're living under a rock you probably do), you're probably dying in anticipation for the show's final episode. And whether you're hosting a watch party at your apartment, or if you're heading out to a bar, you'll most likely want something to stress-eat. Wings, dips, and sliders are undeniably honorable snacks, but Sprinkles' Game of Thrones-themed cupcakes are all I want to be eating while Sansa comes out of left field and claims the throne (sorry y'all, it's gonna happen!).

Between Friday, May 17 and Sunday, May 19, Los Angeles-based cupcake chain Sprinkles is offering one of the the most epic snacks in all the land: GOT-themed cupcakes. According to the brand, there are four delectable varieties to choose from in-stores and online, including the Lemon Dragon Fruit GOT cupcake, Red Velvet for House Targaryen, Vanilla for House Lannister, and Dark Chocolate for House Stark. Each one is super festive and undeniably delicious, guaranteeing a worthwhile stress-eating sesh. Oh, and I won't judge you based on which you decide to get... TBH, I'm totally House Lannister at heart.

To start, there's the OG Game Of Thrones cupcake, which — according to the brand — consists of lemon dragon fruit cake. It's iced with Ice Blueberry buttercream frosting, and topped with Black Cherry Candy Dragon Glass, as well as a custom Game of Thrones decoration and sword. It's undeniably epic and also ~throne neutral~ if you aren't sure who you're rooting for at this moment in time.

Next there's the Red Velvet Cupcake, which is appropriately decorated with a House of Targaryen Custom Decoration, according to Sprinkles. If you're rooting for Dany, this one's for you.

Then, of course, there's the Vanilla Cupcake, which — per the brand — is decorated with custom Lannister decorations. If you're a Cersei fan, you can nibble on these in her honor.

Finally, there's the Dark Chocolate Cupcake, which is decked out with House Stark decorations, according to the brand. If you're waiting for Sansa and Arya to snag that winning title, these have your name all over them.

You can get any of the Game of Thrones cupcakes on their own for $4.95 or $5.95 each depending on your bakery, according to Sprinkles. However, the Dozen Box is a really solid deal if you're watching with friends. It features three of each GOT cupcake variety above, and will cost you anywhere between $49 to $56, depending on your bakery. That's guaranteed to keep you fueled for the entire hour-and-a-half long episode. Let's be real, with a fan-favorite franchise coming to an end, you're going to want a good amount of comfort food around

The battle for the throne is really taking a toll on me at the moment, but I'm still tremendously excited for the finale. Whether you decide to get in on House Lannister, Stark, or Targaryen cupcakes — or if you want to keep it neutral — is entirely up to you. Either way, though, each and every one of these sound pretty ~fire~.