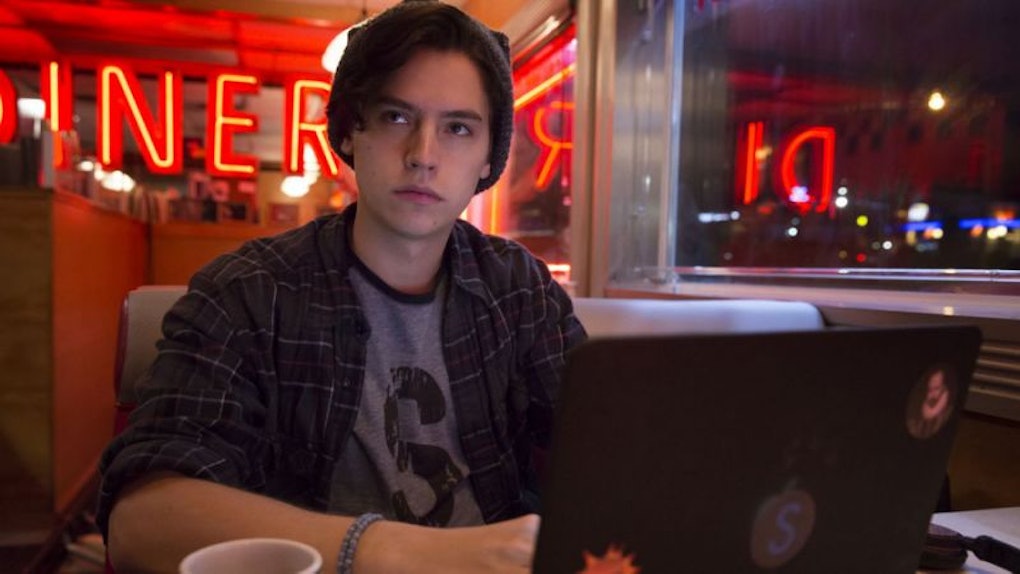 The second episode of Riverdale's dark new season ended with a literal bang on Wednesday night, but the surprising gunshot wasn't the only sound to capture viewers' attention. As the latest episode faded to black with the fate of two characters in question, a catchy psychedelic rock track fuzzed and wailed over the end credits. It was a perfect cap to what actually turned out to be an episode full of some really fun musical moments, but some fans are wondering what the final song in Riverdale Season 2, Episode 2 is, and where to download it. Don't worry; I've got you covered.

Although the Archie Comics love a good '50s throwback, the ominous ending song from the new episode is actually very emblematic of the 1960s and the emergence of psychedelic rock that came to define the music of that era. The song is called "Season of the Witch," released in 1966 by the Scottish singer-songwriter Donovan, who was actually a close friend of The Beatles back in the day. You can hear the hit song pretty much anywhere you stream or download music, including YouTube (below), Spotify, and iTunes.

Of course, for hardcore Riverdale fans, it's hard not to immediately theorize and speculate wildly about what that song title could be suggesting. After all, we've been waiting for so long to finally meet Archie Comics character Sabrina the Teenage Witch on Riverdale and the anticipation has grown even more in this second season after the recent announcement that a Sabrina spinoff is in the works. So hearing a song called "Season of the Witch" on the show seems to send a pretty clear message to fans — could Season 2 of Riverdale become the season of the teenage witch?

Aside from sending the fandom into a Sabrina-feuled theory-fest, "Season of the Witch" also just felt like the perfect song to capture the tone of that grisly final season of the episode. So far, every episode in Season 2 has ended with the man in the black hood attempting to kill a character, a trend that actually started in the Season 1 finale when he shot Fred Andrews. In the new episode, we see Moose and Midge on the other end of the mysterious killer's gun — he snuck on them while they were taking the (ridiculously named) drug jingle jangle and hooking up in the woods. Is the show setting up a theme for the new season, where every episode ends in a murder attempt?

"Season of the Witch" wasn't the only standout musical moment from the new episode — we also got our first performance from Josie and the Pussycats in the new season. Josie recruited Cheryl to join the girl group as they performed a breezy cover of Kelis's "Milkshake" at the fundraiser night for Pop's Diner.

Music has been a central part of the show since Season 1. Archie's main arc for a while was pursuing his passion for music, and he got help from music teacher Miss Grundy as well as the high school's star musicians Josie and the Pussycats. Archie, Josie, and more characters performed a number of original songs and covers throughout the first season, which were released in an official soundtrack for fans. The Riverdale Season 1 soundtrack is available for purchase on Amazon and on iTunes.

But as the use of "Season of the Witch" proved in this episode, fans also love how the show employs its background music. A number of Spotify users have collected all the songs that have played on Riverdale in ever-growing playlists.

I can't wait to see what songs Riverdale will use next.

More like this
In 'Riverdale' Season 5, Toni Topaz Is The Black Superwoman Without A Cape
By Erika Hardison
Who Did Emily Poison? 'The Handmaid's Tale' Season 2 Is Off To An Intense Start
By Ani Bundel
'The Circle' Season 2's Episode Release Schedule Isn't Netflix's Norm
By Umber Bhatti
Stay up to date