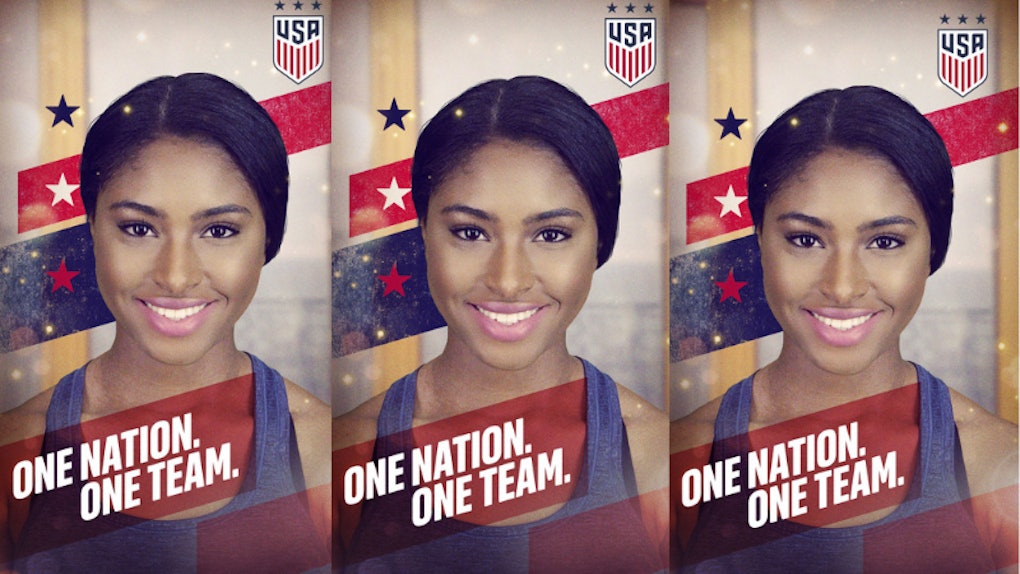 The 2019 Women's World Cup kicked off on Friday, June 7 in France, and American fans are waiting to see if the U.S. team can defend their 2015 title four years later. Will they leave the tournament as the reigning world champions once again? Even if you can't physically be in France watching the teams face off against each other, you can still get up close and personal with the action thanks to Snapchat. Snapchat's Women's World Cup 2019 filters, lenses, and stickers are now here for fans to easily interact with friends and show their team spirit. Here's how to get in on the fun and start snapping away.

Starting on Tuesday, June 11, Snapchat users can head over to the social media platform to access a bunch of new features all themed to the global sporting event. The day marks the United States' very first game in the cup (they'll be playing against Thailand at 3 p.m. ET, FYI).

This year, fans will be able to show their support for their team in really fun ways. Custom filters and lenses featuring each country's flag and team colors will be available in Snapchat on the days that those teams are competing. And for fans in the United States, there are even more fun features to take advantage of, including custom Geofilters and lenses. They'll be available for the U.S. team's very first match on June 11 and for all of their games after.

Snapchatters can also head to the app to check out a specialty sticker pack with FIFA emblems. The pack was available on opening day and will be back for the final. In addition, a customized 3D World Lens featuring the Women's World Cup mascot and trophy will be available to use around the world during the final match on July 7.

If U.S. fans aren't down with layering snaps with specialty filters and lenses, they can also head to the app to get the scoop on the actual games.

Watching the action unfold is easier than ever, thanks to the fact that Snap has partnered up with U.S. Soccer to bring the U.S. games right to your phone. According to a Snapchat rep, users can head over to the app's Discover page (which is located to the right of the camera) to check out some specialty Our Story coverage of the U.S. matches. That means even if you're stateside, you can watch coverage of the three U.S. group stage matches as well as the semifinal and final games simply by opening up the Snapchat app. Yep, fans don't even have to worry about heading to a bar or a friend's house to watch the games.

While the United States is favored to win the cup (after all, 12 players from the 2015 championship team will be returning this year), only time will tell if they're actually able to hold onto their title once again. Whatever the outcome, you'll want to open up Snapchat to watch the matches unfold and get in on the action without leaving your couch.