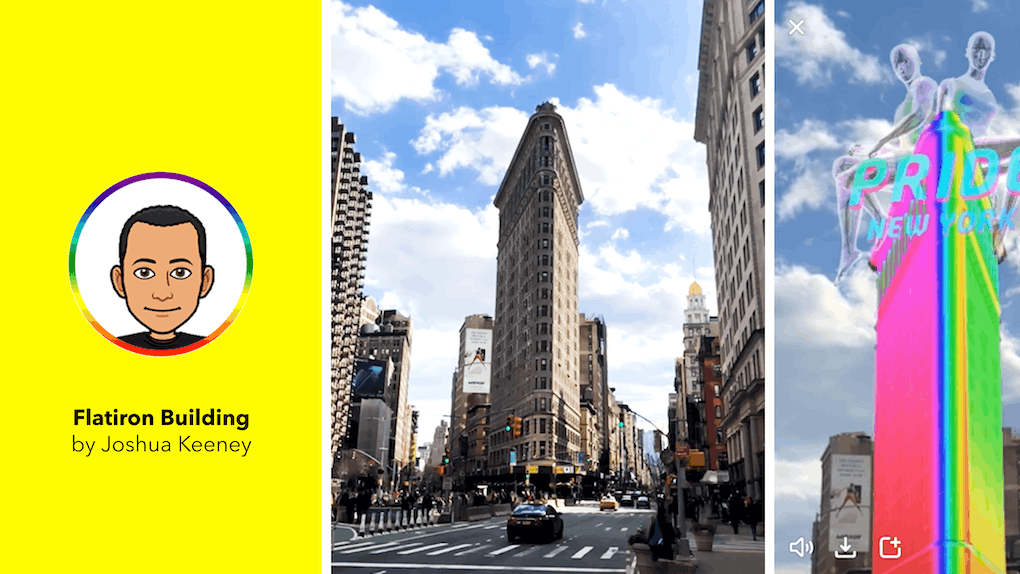 It's officially Pride Month, y'all, and there are so many ways to celebrate. LGBTQ people and allies can attend Pride events, eat and shop at places that support the LGBTQ community, and watch or listen to media made by and featuring LGBTQ people. But Pride celebrations don't have to be limited to what you do IRL — in fact, Snapchat wants to make it just as easy to show your support for the LGBTQ community in the digital world and on your social media platforms. Some of Snapchat's Pride 2019 Lenses will digitally transform iconic landmarks in the U.S. to a Pride-themed color scheme, while others will let you give your Snaps a rainbow makeover.

In April 2019, Snapchat introduced a feature called "Landmarkers," a new kind of augmented reality (AR) lens that transforms various landmarks and buildings around the world. To celebrate Pride month, Snapchat had Official Lens Creators who self-identify as LGBTQ create three LGBTQ Pride Landmarker Lenses that transform various landmarks into rainbow Pride-themed buildings. According to Snap, the landmarks currently available are the Flatiron Building in New York, New York; the Chinese Theater in Los Angeles, California; and the Capitol Building in Washington, D.C.

Here's how it works: In order to paint these landmarks rainbow, you need to physically visit one. When you get there, launch your Snapchat app, make sure its set to the rear-facing camera, tap on the background to launch Lenses, and swipe to the Landmarker Lens. The result should look a little something like this:

Sallia Goldstein, the Official Lens Creator behind the LA Pride Landmarker Lens, is an LGBTQ visual artist based LA, and she made sure to include "symbolic elements" representing the LGBTQ community, per Snap.

Snapchat's Pride Landmarkers aren't the only way Snapchat wants to celebrate Pride 2019. You can also watch Pride-themed content in Snapchat Discover, which you can access by swiping right from the Snap camera. According to an email sent to Elite Daily, Snapchat's Discover page will feature content in "Our Stories" that digs deeper into LGBTQ experiences, identities, and cultures spanning across the world. Some stories to look out for include "Drag Queen," which provides viewers with a closer look into drag culture and the process of getting dressed up in drag; "Identity," which highlights different issues that are important to people in LGBTQ communities; and "Queer School," where LGBTQ people teach Snapchatters about the many identities inside and outside the acronym, as well as the origin and common misuse of some words and phrases. Snapchat is also featuring Pride-themed Publisher Stories on its Discover page.

Snapchat users can also find additional fan-made Pride or rainbow-themed lenses by swiping up for additional Lenses from the Lens Carousel. You can type in phrases like "Pride" or "Rainbow" to the search bar. The app's "Love Wins Pride 2019" Lens will wash your photos and videos in rainbow hues, and you can access it with this Snapcode.

This isn't the first year Snapchat has gotten festive for Pride. In 2017, Snapchat rolled out creative tools for Pride month like a Pride-themed emoji brush, a Pride-themed sticker pack and Bitmoji, and Pride-themed geofilters, in addition to stories from the LGBTQ community on Discover.

So, if you haven't done so already this month, launch your app and start celebrating Pride in Snapchat style.