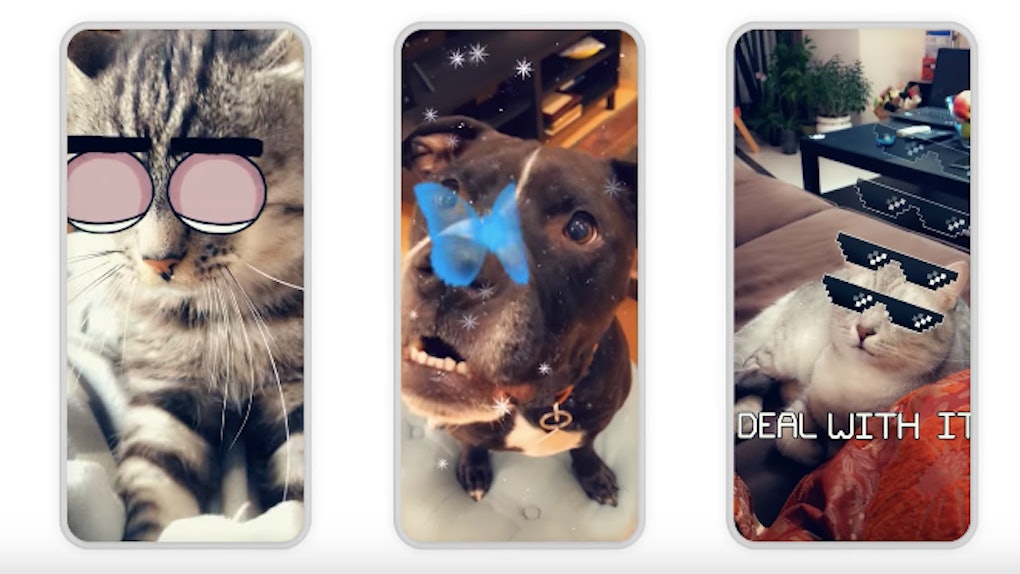 There is truly nothing more fun than using a solid augmented reality (AR) filter in Snapchat. But the popular photo-sharing social media app is kicking things up a notch (or three) by offering a plethora of new AR features. From Lenses, to calculators, and even a shopping feature, they're adding so much cool technology. So, if you haven't already heard about Snapchat's new AR Bar in Snap camera, it's seriously out of this world. IDK about you, but I am truly blown away.

On the afternoon of Thursday, April 4, Snapchat hosted their first-ever Snap Partner Summit in Los Angeles, California, according to AdAge. They discussed a variety of new Augmented Reality features, and one of them happened to focus on their spankin' new AR Bar.

According to Snapchat's latest blog post, Snapchat designed their new AR Bar to help users discover and navigate Lenses a little easier. One of the greatest features is the new Scan button, which basically locates contextually relevant Lenses whenever you point your camera at certain objects. For example, when you point your camera and tap the "Scan" button facing your beloved pupper, you can find Lenses to fit his snout. If you're facing the Empire State Building, a relevant and fitting NYC lens might pop up. If you're eating a slice of pizza, it might generate a 3D slice to dance all over your food. Check out the video below to see just exactly I mean — it'll seriously blow your mind.

OK, wow. That is seriously wild, isn't it? Honestly, being able to have your camera scan your surroundings and find relevant Lenses totally ups the ante in the realm of social media, if you ask me. What a game changer.

In addition to upgrading your photo game, the app's new Scan button feature also helps you experience way more through the Snapchat app, according to Snapchat's blog post. If you point your camera at a math problem, it will be able to scan the page and help you solve it. If you're looking at a pair of shoes you like, it should be able to help you locate where you can buy a pair for yourself. And if you're listening to a song, it'll basically "Shazam" it all on its own, and tell you what you're listening to. Do you go ham for Hamilton? You'll soon be able to scan a $10 bill with the Alexander Hamilton on it, and it will literally start singing songs from the hit musical.

I cannot fathom how much work this probably took tech-wise, but it looks like Snapchat is pulling it off beautifully. They are truly slaying the game right now.

While the Scan feature is my No. 1 favorite aspect of the AR Bar, it will also allow users to more easily "Create, Browse, and Explore Snapchat's Lenses," according to a press release. And while hopping aboard the AR Bar sounds pretty sweet right now, sadly, you won't see these new features in your app immediately, as it's "rolling out soon," per a press release sent to Elite Daily. Dang.

Snapchat's AR Bar is kind of awesome. Social media-wise, it totally upgrades your photos and videos. And life-wise, it solves your most pressing problems, whether you're doing math, finding a pair of shoes, or trying to figure out what song you're listening to. Either way, the social media app is seriously upping its AR game — and putting the technology right at your fingertips.