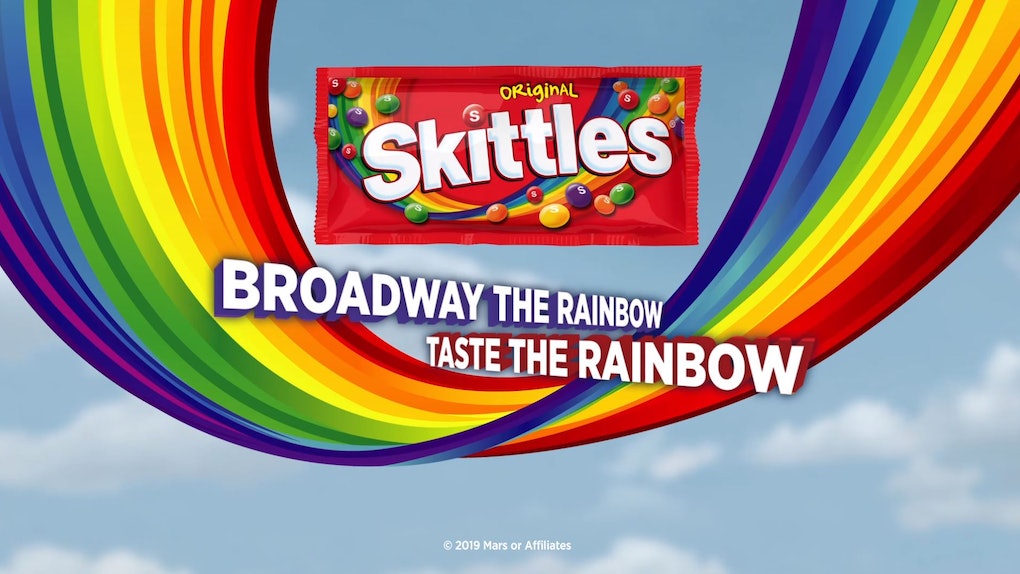 Like most of the American population, I am all about getting together with friends to celebrate Super Bowl Sunday. But between you and me, none of my favorite parts are actually football-related (LOL). To be completely honest, I get most excited for the Puppy Bowl, the wide variety of tasty snacks, and most importantly, the high quality commercials. Most big brands are known for their witty and well-produced advertisements, and this year, Skittles' 2019 Super Bowl ad is going to be a live Broadway musical that won't even air during the game. Regardless, I am so, so pumped.

If you're a TV buff like I am, there's a likely chance you're familiar with Emmy-nominated actor Michael C. Hall, from the likes of Dexter, Six Feet Under, and The Crown. And according to a press release, Hall will be starring in this year's Skittles ad for the 2019 Super Bowl, called “Skittles Commercial: The Broadway Musical," a 30-minute show. It will be performed inside an actual 1,500 seat theatre, and I don't know about you, but I am beyond pumped to see it.

The play itself sounds pretty interesting, if you ask me. According to the Skittles The Musical website, the show will consist of several musical numbers, taking an introspective look at how consumerism plays a big role in our lives. Even though the advertisement won't actually air during the Super Bowl, it's going to be presented in front of a live audience at The Town Hall in New York City on Sunday, Feb. 3 at 1 p.m. ET, so that's definitely something to get excited for, if you ask me.

If you think you might be interested in taking a night (er, afternoon) out on the town to see Skittles' live Super Bowl musical, tickets sold pretty darn quickly when the show was first announced a few weeks ago on Monday, Jan. 14. However, if you're still dying to see the already-popular live performance, fear not, because you still have the chance to get tickets.

According to the press release, additional tickets will become available for fans to purchase on Ticketmaster as of Monday, Jan. 21, so you're not totally out of luck. Just act quickly if you're legitimately interested, because those are most likely going to sell relatively quickly as well.

While Skittles Commercial: The Broadway Musical looks absolutely amazing all on its own, the best part is that all of the money it makes will be going to a really solid cause. You heard that right — in fact, according to the Skittles The Musical website, all of the ticket proceeds from the show will apparently be donated to Broadway Cares/Equity Fights Aids, to raise money for AIDS-related causes throughout the country. Skittles will also be matching each of the donations made, so that's a pretty sweet way to encourage fans to come out and do their part.

Even though I'm a little disappointed that Skittles Commercial: The Broadway Musical won't actually be airing during the Super Bowl, it looks like the musical itself is going to be a helluva good time. Just make sure you get your tickets beforehand, though, because it looks like they're going to sell out quickly. It'd be a real shame to miss out on this delicious opportunity.

More like this
Starbucks' Earth Month Game Prizes Include Free Drinks For A Year & An Electric Bike
By Daffany Chan
This Dunkin' x Charli D'Amelio Merch Collection Features A Sparkly Tumbler, Scrunchies, & More
By Collette Reitz
Oreo's Cookies & Creme Eggs For Easter 2021 Won't Be Around Long
By Daffany Chan
Stay up to date