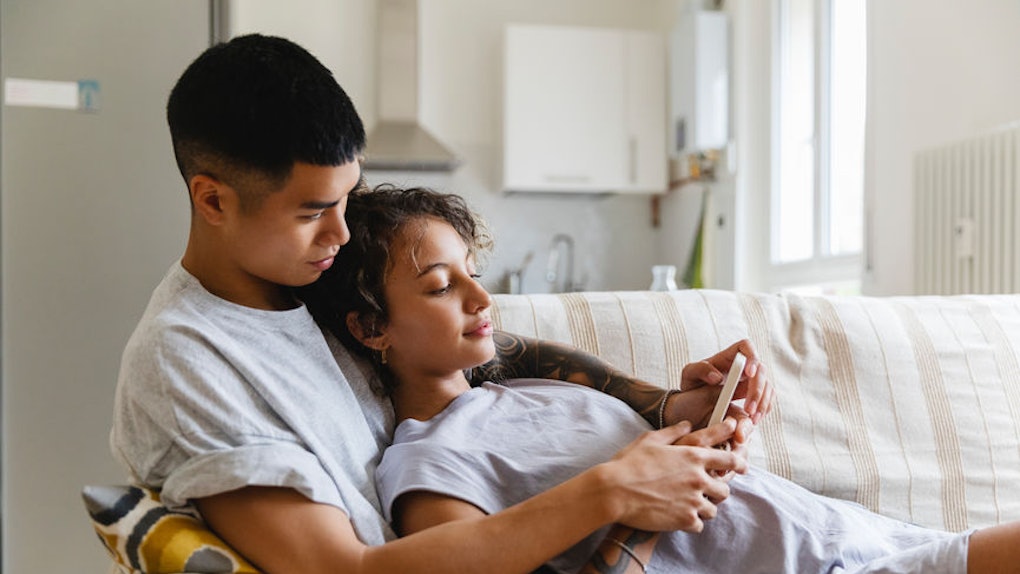 Picture this: You're sitting next to your partner as they're scrolling through their Instagram feed when you see not one, not two, but three almost naked pictures of "Instagram models" in a span of 10 minutes. For some people, this can be an uncomfortable situation and a total turn-off, while others don't really mind. Although there's no right or wrong way to feel about who bae follows, you might find yourself wondering, should your significant other follow Instagram models? Ultimately, it really just depends on how you and your partner both feel about it.

Every couple is different. If your partner follows these models, and you don't mind, then there isn't much (if anything) to really figure out — as long as you're both at peace with it. On the other hand, if knowing that they follow those accounts makes you feel uneasy, that's totally OK, but it's important to let bae know how you feel and why. As with most things in relationship, the key to moving forward with your partner is to talk to them about how them following Instagram models affects you. While it would make things much easier if your SO could know what you're thinking without you having to voice it, science hasn't gotten that far yet. So, for now, communication is such an important part of solving any issue that may come up in your relationship.

In a recent AskWomen thread, Reddit user idkcf posed the question, "What is your opinion on a SO following several 'instagram models'?" and it led to a thorough discussion on the matter. Some women said they didn't really mind, others were definitely against it, and a few added that it depended on how their partner was interacting with the models (if at all). See for yourself.

They’re just models basically online. They usually have tons of followers. I wouldn’t be worried. It’s basically like me following male celebrities.

They can look at any instagram models they want, it's not like I'm not thinking perverse things about and actively looking at beautiful women too.

A good SO will make you feel valued, this is a non-issue.

They are selling a look or aesthetic, it's harmless and getting worked up about it will only create unnecessary issues. So long as you have clear boundaries in your relationship there won't be any problems.

Not worried about it but I would see a 1 point drop in IQ for each one followed if he doesn't know them.

These Women Think It Depends On The Situation

I don’t care who he follows as long as he’s respectful of our relationship. If he’s lusting over other women on IG it would be weird but following them and looking at their pictures doesn’t really mean anything.

I don't really care. Looking isn't a problem, actions outside of looking are a problem.

Nothing wrong with it unless my S/O is just lurking like a creep on their pictures. Then you know..

I'd have a problem.

Generally wouldn't bother me. If I was dating a guy who followed like 80 instagram models and commented on their posts and was ALWAYS looking at their feeds, it would get old quick.

But it's just some random hot person. As long as it doesn't go past just scrolling past photos or whatever and they're respectful of our relationship, I wouldn't be too bothered by it.

And These Women Are Not OK With It

kind of childish, really. would remind me of those trashy posters teenage boys hang up in their bedrooms. ooo omg hot girl tee hee~

It would probably make me sad, but I don't think it's my business to control what he looks at so I just don't look at who he follows. I trust that he's respectful of our relationship in his life online and offline.

If they follow a bunch of models that just post bikini-ware (i.e., following models to lust after them), I'd find it pretty childish and immature. It's equivalent to having bikini model posters hanging up in their bedroom — it was okay at some point when they were young, but not as a fully grown adult.

TL;DR? If you feel conflicted about who your significant other follows, you're not alone. If their Instagram habits make you feel uncomfortable, it's important to speak up — that's the smoothest way to figure out the issue together and continue to thrive.