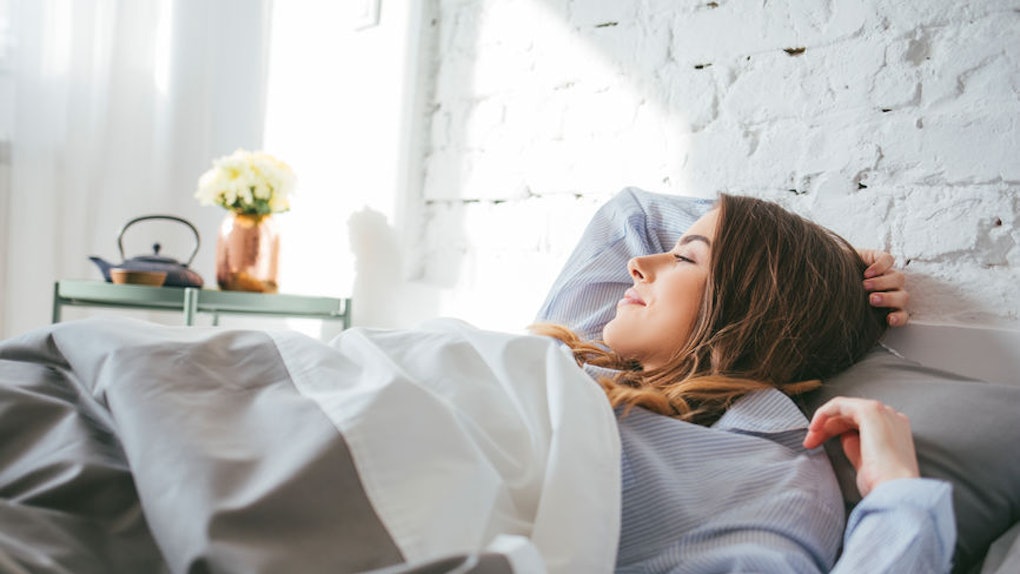 Should You Wake Up Early On Weekends? Experts Say There's A Happy Medium

Is there anything more exhilarating than when Friday night rolls around, and you can cease any and every alarm you’ve set for the week? Personally, I can’t think of a single one. (Granted, my body’s idea of “sleeping late” is 8 a.m., but it’s something, so I digress.) Eliminating the shrill of an alarm and, instead, waking up according to your internal clock is inarguably pure bliss. Marvelous as it may feel, however, there’s sort of this ongoing debate over whether or not you should wake up early on the weekends to keep your sleep patterns stable. I realize that by typing that, I potentially just ruined your day, but hear me out — because the science behind this theory actually makes a lot of sense.

Correct me if I’m wrong, but I think the reason why most people cling to the idea of sleeping late on the weekends is because they have to wake up early for work during the week. Ergo, the weekend is sort of a “grace period” where it’s assumed that you can “make up” for a lack of sleep Monday through Friday. Should this be the case — and again, sorry to be the bearer of bad news here — you should probably know that making up sleep isn’t exactly a thing. At least, not in this context.

According to the co-founder and chief product officer of Som Sleep, Rob Bent, when you fail to get as much sleep as your body requires from the day it’s just endured, you accumulate what is called a “sleep debt.” A sleep debt, Bent tells Elite Daily, can build up over time if you’re repeatedly experiencing short episodes of sleep. Think of it like credit card debt, only instead of accumulating bigger bills, disregarding your poor sleeping habits can rack up a high risk of negative health issues, such as stroke and heart attack, Bent says.

Unlike credit card debt you can pay off with a click of a button, though, working off sleep debt isn’t as simple as sleeping until noon on Saturday and Sunday. In fact, Bent says it can take anywhere from one to two weeks of regularly extended sleep periods to fully recover. However, sometimes it just isn’t always feasible to clock in the recommended six to eight hours of shuteye every night. And, if that’s the case, Benton tells Elite Daily, the best next step is to start making it up “as soon as possible” by maintaining “consistent sleep and wake times.”

“A steady schedule allows your body to establish a strong and effective circadian rhythm, easing the nightly transition from wake to sleep,” Bent explains. “If you find those two hours of extra weekend sleep inadequate to recover fully from the rigors of your work week, take a hard look at your schedule and make the investment in yourself to get no less than eight hours per sleep each night.”

It’s all goes back to keeping your sleep schedule regulated, friends, and according to Dr. Catherine Darley, a natural sleep expert and member of the Sleep Cycle Institute, not only will sleeping later on the weekends not make up for loss sleep, it will also fudge up your cycle as a whole.

Darley tells Elite Daily that your sleep drive gradually builds from the time you wake up so that you’re starting to feel sleepy around bedtime. It essentially allots us the perfect amount of wake time. But, let’s say your day starts late on Sunday. This means “your sleep drive is not as high as usual at your typical work night bedtime,” Darley explains, “causing more difficulty falling asleep.”

So up until this point, I’m sure this article probably reads as an anti-sleep late, pro-wake up early on the weekends campaign, but that’s not entirely where I’m going with this. While experts do think it's wise not to sleep until 1 p.m. every weekend day when, on work mornings, you’re typically up at 7 a.m., they aren’t necessarily suggesting that you wake up at the crack of dawn to keep things copacetic. In fact, Dr. Roy Raymann, a resident sleep expert and the vice president of sleep science and scientific affairs at SleepScore Labs, says he doesn’t not recommend sleeping late on the weekends, and he isn’t recommending waking up hours earlier than you’re used to. What he does suggest is finding a schedule that works for you, and sticking to it.

“Don’t wake up earlier nor later then you do during weekdays,” Raymann tells Elite Daily. “Find the right amount of sleep for you, so that you don’t feel the need to sleep in during the weekend,” he continues, adding that once you figure out that sweet spot, schedule your bedtime and wake time so that you can get that amount every night. It's that simple and not nearly as cringeworthy as you thought, right?