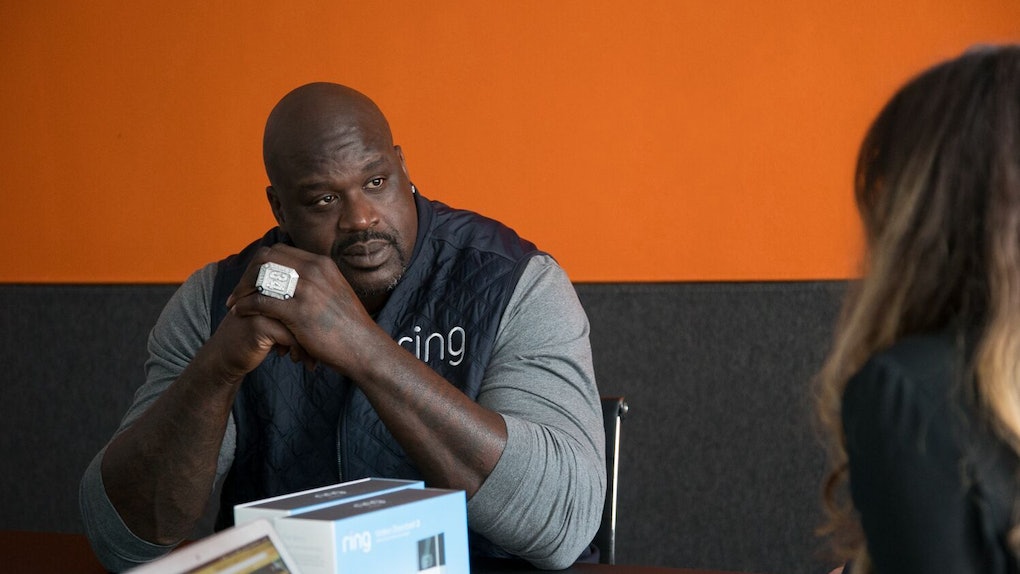 Shaquille O’Neal is 7 feet and 1 inch tall. No, this isn’t exactly groundbreaking news; in fact, you can readily access that information anywhere within the 6 million search results that populate for “Shaq” on Google. But there’s a very real difference between knowing Shaq is 7’1" and standing in front of him, shaking his tremendous hand. At 5’10", and a perpetual 6’3" in heels, I don’t often feel small... but next to Shaq, whose head grazes the elevator ceiling as we climb up the 11 floors to our office, I am tiny. I imagine in the right setting — for example, posted up in a basketball game — he might be incredibly intimidating. However, squished into the lift and posing for selfies with a confused, but excited fan, he seems more like a teddy bear: a gentle giant whose size makes you feel safe rather than scared. Well, that’s convenient, I think, given he’s here to promote Ring, a home security company, who could be a better spokesperson than Shaq?

Well, it turns out there is no better spokesperson than Shaq. His initial involvement with Ring — the company that revolutionized home security with the video doorbell — was completely organic. He endorses the product because he loves it, not because he’s paid to. “Well, that’s convenient,” I say (aloud this time) to Ring’s founder and chief executive, Jamie Siminoff. Imagine searching for the perfect means of marketing your product, racking your brain and Rolodex, making cold call after cold call… and then Shaq arrives at your doorstep, already obsessed with your mission. If the story feels a bit like the last 30 minutes of the film Serendipity, it’s because it kind of is. Let me explain.

Anyone at least moderately familiar with Shaq’s professional basketball career will know he’s moved around a bit — Orlando, Los Angeles, Miami, Phoenix, Cleveland, Boston, etc. What many people don’t know about Shaq is that he’s been actively involved in law enforcement in nearly every city he’s lived in. This isn’t, as Siminoff clarifies, “because he’s an L.A. Laker and they said 'Here, be a cop.' He went through police academy. He did the whole thing; he's a real police officer.” Shaq’s commitment to making neighborhoods safer has always been a passion project that complemented his sports, acting, and musical careers, but it took on a new lease the first time he moved into a home that didn’t have its own security built in, “This is my first time not living in a private community. So I called a couple of security companies for some cameras. $50,000-$60,000 was the quote.” In disbelief that something as fundamental to humanity as the desire to feel safe would carry such a steep price tag, Shaq searched for other possibilities. You can call what happened next kismet.

“So when I move to my new house, I'm at Best Buy picking up TVs and stuff and I see this Ring thing. I think, let me try it. It worked beautifully and it was affordable.” So, of course, Shaq went back the next day and bought some more. He did “his whole house, around 25 cameras, and it only cost $3,000.” Not only is Ring’s price tag 20 times less than any of its competitors', according to Shaq, it apparently works better too. “If a fly goes across the sensor, I get a call,” he tells me, “a fly.”

Needless to say, Shaq was impressed. So, naturally, he set off to the Las Vegas Consumer Electronics Show (CES), an event he attends annually, to meet the man who made Ring. “I thought he was one of those, you know, old Silicon Valley guys. So I get there and they say the owner's coming in, and I see this guy coming in…” Shaq signals to Siminoff on his left, who flashes a humble smile, “And I'm like 'You're the owner?!' He looks so young, he just looks beautiful.” The chemistry between Shaq and Siminoff (a show I would watch) is easy and infectious. As Siminoff tells me in an aside, “I feel bad for all my employees. They’re in the office working and I get to hang out with Shaq.” As I glance out of the glass-walled conference room at the open floor plan of my office, filled with bowed heads, clacking keyboards, and frantic mouse clicks, I can’t help but agree, “Hard same.”

I ask the pair if it was love at first sight, and Shaq confirms the dynamic was immediate, “We just started talking. He has kids, I have kids… He told me about his affinity for law enforcement, I showed him my badge. I said, ‘Hey if you need a partner to help you get this product out, I would love to be involved. If not, I'm still a fan of your work.’” And, of course, Siminoff agreed.

The meeting showed them that they share a common ideology: Safety isn’t a privilege; it’s a right. “Our goals as a company are not around revenue, I mean obviously we are a for-profit company and so we hope that by doing the right thing that it comes back and people want to use the product... But at the same time, we want that to be a factor for everyone. And so it's really about protecting the whole neighborhood not just about the end customer...” Siminoff explains before Shaq interrupts, praising his friend who won’t do it himself, “He does a lot in the community. He actually gave over $2 million worth of product — just gave it away — to people who are less fortunate. We handed them out in Boston, in Atlanta... He doesn’t like talking about it but I just have to brag for him.” A slightly bashful Siminoff adds, “If you're going to try to make neighborhoods safer, it has to be all neighborhoods. It has to be for all people.”

The evolution of technology has certainly made affordable price points for products like these more feasible. A comprehensive security system doesn’t (and absolutely shouldn’t) cost $60,000 anymore. Safety can’t be a class issue, especially when the places that need it most are often the ones that can’t afford it. With Ring, security is more accessible; you can even do everything from your phone. Imagine answering your home doorbell, miles away, while at work. Imagine being able to communicate directly with (read: scream at) the grainy figure in your driveway at 4 a.m. who’s testing to see if your car is locked from the comfort of your own bed. These “luxuries” aren’t out of the average person’s reach in 2017.

But, of course, with that same evolution comes new territory in the security world, particularly in the age of online shopping. And that’s what brings Shaq and Siminoff in front of me today. “Cyber Monday is upon us,” Siminoff warns eerily. While we’ve all heard the risks Black Friday has to offer (hello being trampled in lines), Cyber Monday remains relatively untrodden ground for many of us. In 2015, 23 million Americans had packages stolen from their doorsteps. Combine that with the steadily rising average value of these packages, and you have a considerable problem. Package theft has become a standard risk when cashing out your online shopping cart.

That’s why the people at Ring invented their own holiday, timed for the most common delivery days following our big ticket purchases on Cyber Monday. National Package Protection Day, held on the Wednesday following Cyber Monday (November 29, this year) is dedicated to making sure your brand new TV, laptop, or speaker system, etc. doesn’t end up under someone else’s tree. The “holiday” may be new, but the trend that necessitated it is very real. The premise here is that petty theft is a gateway crime and cracking down on it will discourage any more dangerous or serious crimes.

Ring’s ultimate goal is to recreate a collective sense of community absent from many modern neighborhoods. It wants us to return to the neighborhood ideal, in which people communicate and look out for one another rather than cohabitate in silence. Its app, which is now accessible to people who don’t have Ring as well those who do, incorporates a social layer to encourage just that. People in the community can send messages to one another and share reports, “We create these sort-of larger rings of security. Maybe a neighbor can’t afford it or doesn’t have it. It’s really about the neighborhood for us, not the person who bought the actual product.” And the results, Siminoff says, speak for themselves, “I’d say over hundreds of arrests.” He receives new videos of interrupted crimes every day (and I have to say they’re fun to watch), “We did this study with the LAPD where we put Ring in just 10 percent of homes in a neighborhood and we reduced crime by over 55 percent” over a 6-month period. That’s no laughing number.

So when I tell you Shaq is here to save you, I’m being serious. He wants to remind you to guard your packages and look out for your fellow neighbor. He’s here to shout from the rooftops that feeling safe in your own home shouldn’t cost more than what an average American makes in a year. He doesn’t wear a cape, but he does have a badge, and holds law enforcement titles from a few different states. And, yes, in case you were wondering, at 7’1", Shaq does hold some county records for being the tallest member on the force. That's why I always say, "If Shaq can’t save us, no one can."