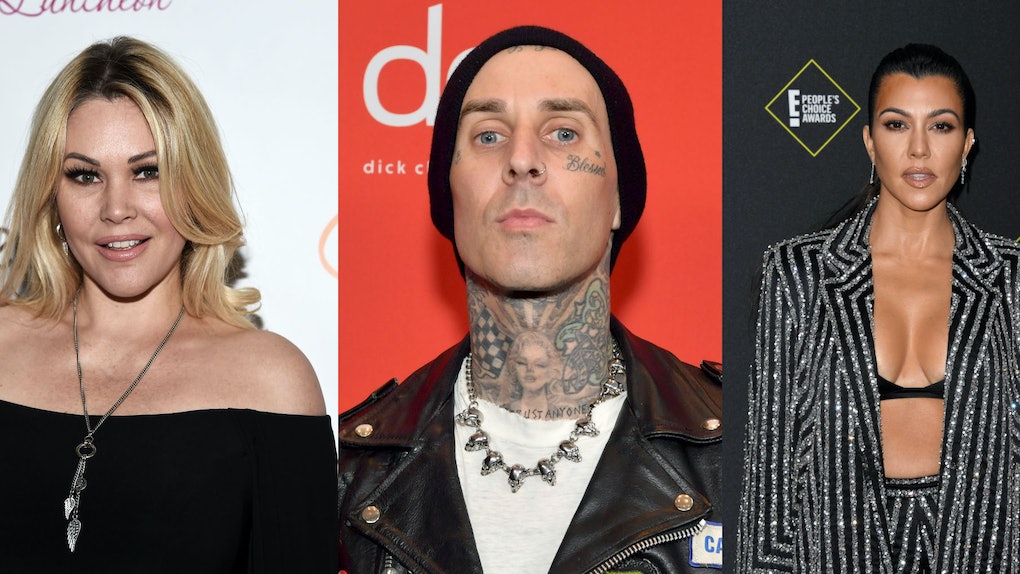 More often than not, conversations about exes can include heavy doses of sarcasm (read: shade), and Shanna Moakler's comment about Travis Barker's new Kourtney tattoo is an absolute zinger. On April 9, TMZ asked Moakler whether she'd seen Barker's new ink. (ICYMI, the Blink-182 drummer got Kourtney's name in cursive tatted over his nipple.) "It's beautiful... it's nice, it's nice," Moakler said, before adding, "Welcome to the club. He's got a couple more on there, too." Oof.

Moakler told TMZ that her name was also immortalized on Barker's body, and coyly held up her wrist to show off a faded "Travis" tattoo. "Now it's her turn. It's her turn to get his name on her," Moakler said. When the TMZ reporter asked Moakler whether she thought the Kardashians were the tattoo types, she said didn't know. "I don't follow any of 'em," she said.

This isn't the first time Moakler has thrown shade at her ex-husband and his new relationship. Shortly after Barker and Kardashian made their relationship Instagram official in February 2021, Moakler liked an Instagram comment a fan left on a photo she posted that said, "Shhhhiiiii that broad don’t got nothin’ on you. Travis downgraded big time."

After being called out for her undercover Kardashian diss, Moakler brushed it off as an accident. "A lot of times when I’m on my social media, I ‘like’ all the fans’ comments," she told Us Weekly, calling it all "an unfortunate event." "I just kind of go down and heart everything, and I didn’t even read that comment."

Then she pivoted and said the comment was about a different ex. "It wasn’t about Travis and Kourtney at all. But to me,​​​​ still, the whole situation, I was trying to just make light of it on my social media," Moakler explained. "My social media is something that I just have fun with. It’s supposed to be fun."

Make of that what you will. Although in the TMZ video, Moakler did acknowledge the faintness of her Travis tattoo. "It's been lasered," Moakler said. "A couple more sessions and it should be gone."