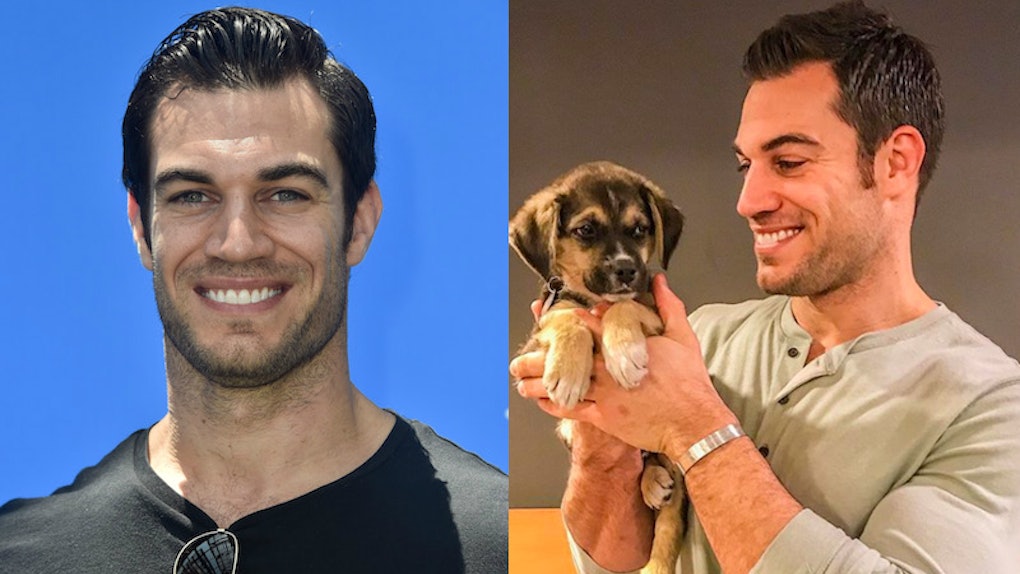 What better way to turn a frown upside down than with an adorable animal photo? If you've been anywhere near Instagram lately, you know that the platform is full of them, but there is one account, @dr.evanantin, that takes this a step further, offering people a closer look at the behaviors of their favorite animals and tips on ways to handle them. I'm talking about the page of the "sexy vet" Dr. Evan Antin, a hunky veterinarian who has amassed more than 1 million followers by simply doing what he loves.

Antin, who uses the Instagram handle @dr.evanantin, lives the life he imagined he would when he was a child. "Animals have always been a part of my life and something I was passionate about. I always knew I would work with them on some major level," he tells Elite Daily in an interview. When he got to the University of Colorado in 2003, he hit the ground running, loading up on science courses and eventually making the decision to get into medicine. After getting into veterinary school at Colorado State in 2009, he "never looked back."

And yes, he's been as busy as it sounds. When he's not working in his California-based office taking patients or performing surgical procedures, he's traveling around the world doing veterinary and wildlife conservation work. "I've been to, like, 10 countries in the past three months," he reveals. Oh and, of course, he's uploading content for his massive social media following.

The goal is to spread awareness and get people informed.

Antin first created the Instagram account, @dr.evanantin, in late 2014 to highlight animal education, wildlife conversation, and veterinary medicine. The page features everything from cute photos of baby spider monkeys and giant kitties that look like Garfield to videos of Antin feeding African elephants and playing with unusual animals in Sri Lanka. What sets Antin's Instagram page apart from other accounts filled with pics of cute animals is the animal care tips and information peppered in the captions, thanks to his veterinary knowledge.

For example, instead of just scrolling past a fluffy pup photo, Antin's followers were introduced to Piggly, a dog with albinism, in a November 2018 post that was also accompanied by a lesson on albinism in animals. "Albino animals in captivity aren’t as much of a concern as albino animals in the wild assuming that a given species normal color variation is not white," he wrote in the caption. "Being born albino in the wild is no bueno because you stick out like a sore thumb."

It's all part and parcel of the mission behind his Insta. "The goal is to spread awareness and get people informed about [animals]," he says of his content.

After his first posts went up in late 2014, his account became a hit. In just over a year, his page grew to 10,000 followers (because how can you not like animals as cute as Henry the dog?). Then, it jumped to 15,000 overnight in January 2016, at which point Antin realized he had gone viral. "That was by far more significant than I'd ever grown over the course of an overnight period ever," he explains.

Searching for answers behind the influx of fans, Antin discovered that Bored Panda, a popular blog, had written a story on him, which set off a kind of chain reaction. As followers came trickling in, major outlets started calling for interviews, such as BuzzFeed and The Huffington Post. "Over the next couple of weeks, I jumped up to 220,000 and it was steadily growing from there, until I hit a million," Antin explains. As of publication, Antin's following is at an impressive 1.1 million.

I thought, 'This is an opportunity for me to share, with as many people as I can, what the animal world is about.'

While he admits he didn't expect to go viral or even attract the following he has now, he's certainly not mad at it. Being internet famous, he says, has opened the door for him to share his passion and to get people excited about animals. Not to mention, it earned him a pretty fascinating title in 2014 and 2017: People's Sexiest Veterinarian Alive. "It was great," he says of the honor, which came after the publication caught wind of him from television appearances. "I knew my friends and colleagues would give me a hard time ... but I thought, 'This is an opportunity for me to share, with as many people as I can, what the animal world is about.'"

It's not always so glamorous, though. Antin says a lot of wild things go down when the cameras are off, like the time a rhino charged him in Kenya. "They don't do this often, but black rhinos can be pretty aggressive," he explains of the incident. Or other times when "you get pooped on by some animal or some animal does some silly little acrobatic stunt or something."

Nevertheless, Antin loves what he does. In fact, he's taking his talents to his very own TV show on Animal Planet called Evan Goes Wild, which is set to premiere at 9 p.m. ET on Feb. 24. Off-camera, he's been doubling down on content for his social media. But no day is quite the same for the veterinarian. "There are times when I'm somewhere where I don't have any connection to WiFi for miles. And other days I have down-time when I can get back to some messages and comments," he says. According to Antin, the ones that catch his eye are "when people in the animal world or in [his] field have something nice to say," and when people say they've learned from his page.

Expanding his professional duties beyond his practice and IG account, Antin is also a Behavior Advisory Panel member for Comfort Zone, a plug-in diffuser that releases an odorless vapor that mimics cats' "natural, calming pheromones," so they know the area is safe. He's also looking forward to starting his own organization, which he says would direct people towards organizations and charities he's worked with that provide opportunities for people who want to donate to and help with animals. "Being able to set something up and show people organizations I've worked with has been a long time goal," he says.

For those trying to pursue the social media thing, Antin says it takes an open mind and a lot of determination. You've gotta stay on top of your stuff to see it pay off. "Share your passion and enthusiasm," he recommends. "There was a time that I learned this stuff and I wanted the world to know and that's been successful for me. You've gotta be on top of it and capture those moments. Don't be shy with your camera."

Although Antin knew a life revolving around animals was always in the cards for him, he's learned a lot more about humans (while posting about animals) than he expected. "People have big heart[s] and really want what's best for animals," he says. When people scroll through Antin's posts, he hopes they get excited about the many furry and scaly friends out there and remember that "animals experience emotions in a lot of ways that are similar to people." Ultimately, that's really all he wants people to take from his page.