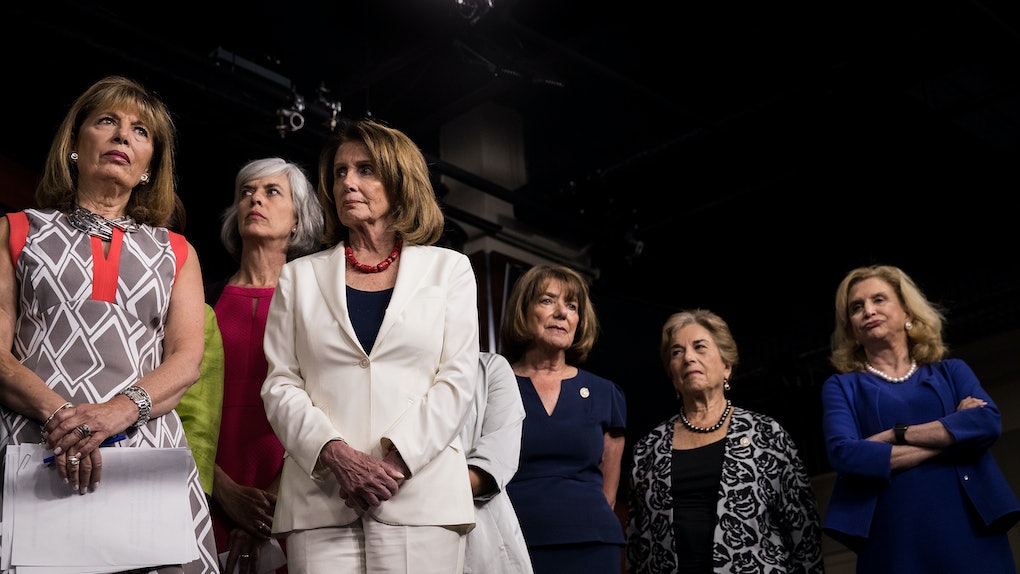 After allegations of sexual misconduct against producer Harvey Weinstein were made public in early October, a trail of women started coming forward with their own sexual harassment stories Now, women in politics have followed suit and are speaking up about sexual harassment in Washington D.C. and capitals across the United States. Numerous women have come forward to say that sexual harassment in politics is a problem, and a few politicians are taking a stand for actual change.

"There’s been a sobering recognition that it’s time for the House of Representatives to stop sticking their heads in the sand and stop catering to the perpetrator," Congresswoman Jackie Speier, a Democrat representing California, tells Elite Daily.

Congresswoman Speier and Assemblywoman Cristina Garcia who represents the 58th District of California, are at the front of a push for change in politics. Speier is introducing legislation to Congress to improve sexual harassment training, among other things, while Garcia's story has helped move the California Assembly to have public hearings on sexual harassment in the Capitol.

"I'm just like all the other women out there dealing with this, except that I have been given an extraordinary opportunity and I have to make the best of it. I have to have the courage to speak up," Garcia tells Elite Daily.

Speier released a video on Friday, Oct. 27 sharing a #MeToo story, dating back to when she was a Congressional staffer. In the video, she claimed that the office's chief of staff "held my face, kissed me, and stuck his tongue in my mouth." In addition to her story, Speier announced that she would be introducing legislation this week to overhaul The Office of Compliance (OOC).

In regards to details of the legislation, Speier tells Elite Daily, "We want to see mandatory sexual harassment training for members and staff, we want to change the OOC to be more victim-serviced and victim-friendly, and we don’t want the perpetrators to get away with it.”

Speier also commented on the U.S. Treasury's funding of sexual harassment settlements, calling the $1 million spent on cases "repugnant." The U.S. Treasury has reportedly paid $15.2 million in Capitol Hill settlements for workplace violations between 1997 and 2014. These cases are determined under a law from 1995 that says any Congressional employee can file a lawsuit alleging harassment — after they have gone to months of counseling and mediation. If settlements are decided on, the accused members do not pay for their own settlements; they are paid confidentially by the U.S. Treasury according to the Washington Post.

These settlements only reflect the number of woman that have filed lawsuits, not every woman that has been harassed in politics. One of the first women in politics to come forward with a #MeToo story this past month was Garcia, who is the chair of the Legislative Women’s Caucus. She also signed the "We Said Enough" letter in October, which aimed to end the silencing of sexual harassment stories and was signed by over 240 women in politics from California.

Garcia explained that she was grabbed by a senior lobbyist two weeks after she was sworn into office in 2012. However, that was not what upset her the most about the incident. "I was even more so upset and shocked by my peers and the senators telling me to be quiet and not to say anything. I thought, ‘If this is happening to me, what’s happening to my staffers who don’t have a title?'" Garcia tells Elite Daily.

Since then, Garcia has dedicated her legacy to gender-identity politics and creating safe spaces for women in politics to come together. She explained that the experience is what helped her, "channel my anger into being an advocate for women." However, in terms of seeing actual change in politics in regards to lessening sexual harassment, Garcia tells Elite Daily, "the guaranteed way to change this culture is by getting parity."

Although we're still far from gender-equal representation in politics, change is definitely in the works to help out the next wave of women to enter the political realm, thanks to these female politicians. They hope that young woman are not deterred from getting into politics because of sexual harassment.

"Do it. Get involved," Speier says. "It’s mine and others who are in office's job to make it safe for you to be able to come and work and not be harassed. I think we are at a tipping point and things are going to change.”

More like this
Ivanka Trump's Women's Initiative Failed Inspection, & It's A Mess
By Rhyma Castillo
Mark Tuan's Quotes About His Solo Career Tease Endless Potential For The Future – EXCLUSIVE
By Michele Mendez
'Shiva Baby' Director Emma Seligman Is Making Films For Her Generation — EXCLUSIVE
By Abby Monteil
Stay up to date