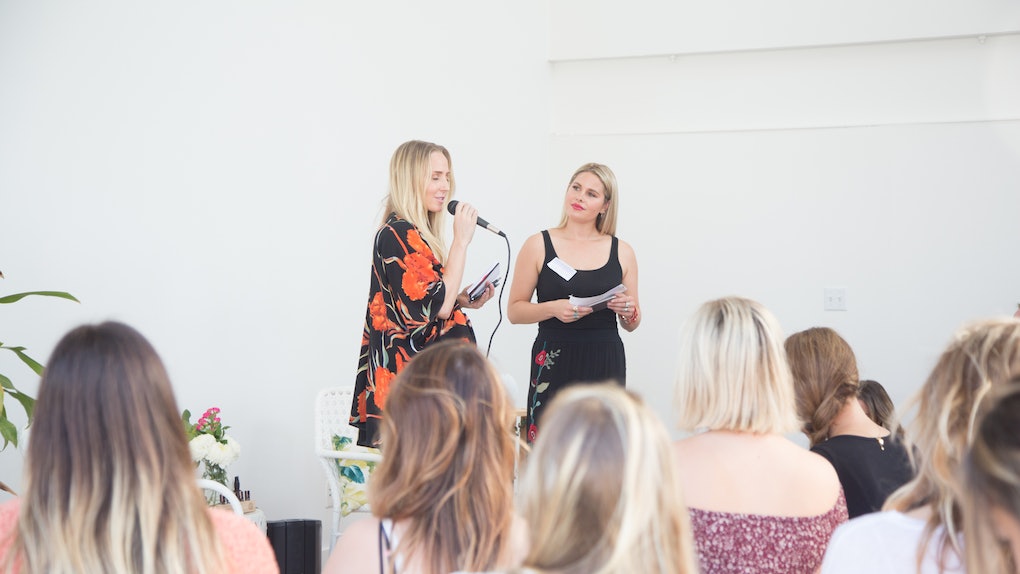 "Sex, Love, & Other Things" Event Made Me Realize How Much Shame I (Still) Had Around Sex

On a recent visit to Los Angeles, a friend invited me to accompany her to an event called "Sex, Love, and Other Things." It was going to be held at a wellness store on Abbott Kinney, which, for those of you who don't speak LA, is a strip of hip-ass shops in the midst of Venice, a once-bohemian beach community. To reiterate: My friend invited me to an event all about sex at a store specializing in essential oils.

My initial reaction was to eye roll. As a New Yorker, I am inherently skeptical of anything having to do with crunchy, California vibes. I grew up on Annie Hall. I was taught that grumpy curmudgeons are more interesting than meditative surfers. I'm what Fox News would call a "liberal elite." On top of that, I write about dating and sex on the internet. What was I going to learn from this event?

I decided to go because sometimes I'm a good friend. (I'm also a little assh*le.) On the day of the event, I walked up to the wellness store to arrive at a beautiful, light-filled event space. Sage was burning in the air, and an attractive gentleman in pajama-adjacent clothing offered to put peppermint oil on my neck. I obliged.

There were maybe fifty other women in the indoor-outdoor space, but as a New York nincompoop, I probably wasn't going to make friends with any of them. Two beautiful blonde women took the stage as I reluctantly sat in my seat. I thought about how I was already woke to sex, and also how tingly the peppermint oil felt on my skin.

The women introduced themselves as the hosts of the Almost 30 Podcast, and the organizers of the event. I couldn't eye roll at this, because I actually just started my own podcast (oops). Plus, Lindsey and Krista were so funny and captivating that I immediately subscribed.

Maybe it was the peppermint oil, or the palm trees outside, but I was starting to settle in. The first speaker was L.A.'s top "energy and transformational worker" Alexandra Roxo. I had no idea what I was in for; I straight up didn't even understand her job title. Then, she spoke, and it scared the sh*t out of me (in a good way). Roxo had us turn to the person sitting beside us — yes, a stranger — and stare into their eyes (so not kosher for a New Yorker...). I was paired up with a super adorable attendee who definitely seemed like she was from SoCal. Roxo had us answer questions like, "What's your fantasy?" and "What's your biggest shame around sex?" TO EACH OTHER! It was so damn scary. I couldn't sit still or even look into my new friend's eyes when talking about sex — a thing I write about on the internet. Why was this so hard!?

My partner went first. She seemed a little nervous, but shared her fantasy. When my turn came, I had no choice but to blurt out a fantasy. The words came out because they had to, but I couldn't maintain eye contact. The fact that articulating a fantasy out loud made me so uncomfortable was a huge wake up call.

Now, let me eat my words: I am in no way as woke to sex as I thought I was.

Despite writing about sex on the internet, I still have shame around talking about "it." I wasn't raised very religiously, my parents were always open-minded when it came to relationships and sex, and I have been fortunate to have mostly healthy sex in my adult life. Where did this shame originate? I think it stems from society, and the way women are taught to tiptoe around sex so as not to seem "easy." Men talk to each other about sex all the time, so why in the world are women taught to feel so much shame around it?

The next speaker, Sophie Jaffe, founder of Philosophie, shared a deeply personal story about her relationship, and I almost cried. Following that, Lauren Schulte, founder of The Flex Company, spoke about "the disk," a new menstrual product, and what it was like to raise capital from a bunch of dudes who've never had their periods. To round out the event, Polly Rodriguez spoke. Rodriguez is the founder of Unbound Box, a badass subscription box of luxury sex toys for women. She discussed beating cancer, her mom's feelings on her daughter starting a company that sold vibrators, and closing the gender gap when it comes to women, men, and sex.

Talk about being un-woke. It had been easy for me to assume that as an adult woman who has sex and dates nice, feminist men, I was totally shame-free when it comes to sex. But that simply wasn't the whole truth. There I was, stressing out about sharing a fantasy with a stranger who was also female, and attending the same event I was. Meanwhile, women like Schulte and Rodriguez raise funds for vibrators and tampon alternatives in rooms full of men. I think it's time to give myself an eye roll. This was a panel — and room— full of amazing women, so I finally told the skeptic in me to "STFU." She was probably just disguising my shame around sex anyway.

I think I look at sex the way I look at L.A.: I have an idea about it. From my vantage point in New York, L.A. looks like a place full of fake boobs, green juice, and "mindfulness" (which I must have intuited from that Sex and The City episode where Carrie gets angry when she can't smoke anywhere in L.A. Ugh, Carrie). When it comes to sex, I have an idea that it is something to be enjoyed, but maybe not to be bragged about. I worry that writing about sex on the internet will reflect poorly on me — meanwhile, have you seen Barstool Sports' Instagram? I still have a lot of lady shame. I mean, it took attending a sex event for me to realize I could be weird about sex.

I left the event pretty darn humbled (and definitely ready to move to L.A.). But here's the thing: I'm not suddenly woke now. I am not magically sexually liberated, screaming eff the patriarchy and doing whatever I want when it comes to sex. That's not how bad habits are broken. What I did learn from this event is that I need to pay closer attention to the preconceived notions I have about myself, and about sex. Do I acquiesce to my male partner's needs before my own too often because that's what society tells me to do? Do I assume I know a lot about sex just because I write about it online? This event reminded me to think outside the box when it comes to sex, love, cities, and all of the other things.