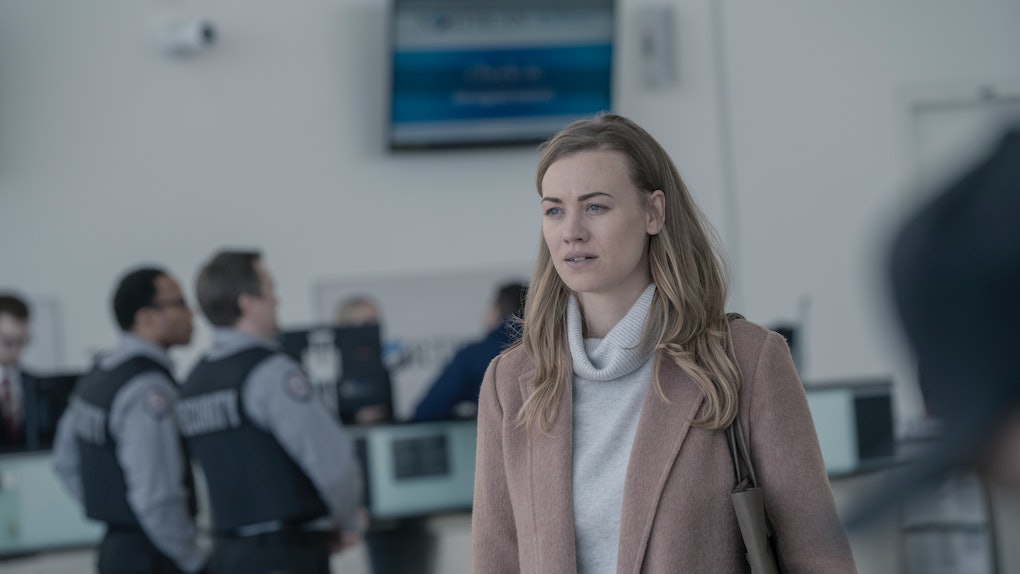 The Handmaid's Tale went back to Canada during Season 2 Episode 5, in a scene that really mixed it up in terms of character interaction. To the surprise of just about everyone, Fred Waterford did not accompany Serena Joy as part of the delegation to see Nichole. This meant fans, for the first time, got to have a scene where Luke confront not the family who enslaved his wife, but the woman who literally holds her down to be raped. It also meant Serena Joy was once again faced with the choice to defect. Serena's phone in The Handmaid's Tale may have gone unused, but actress Yvonne Strahovski promises it won't stay that way.

Last season, when Serena Joy first went to Canada, viewers learned that certain American factions see her as a prime candidate for defection from Gilead. She was, after all, one of the most outspoken religious zealots before the fall of the United States. Serena was a prime mover and shaker in installing Gilead's government. And then, she was forced out, with her husband taking credit for her work, as she became a prisoner in a world of her own making.

Mark Tuello, of the US Government-In-Exile, approached Serena Joy already once, only to be rebuffed. Little surprise he was ready and waiting to meet her a second time when she arrived in Canada sans husband. This time, he's not just bringing words and promises, but a change of clothes and a satellite phone as well.

That phone pricked up the ears and eyes of viewers. There's a thing in plotting dramas known as "Chekov's gun." This isn't some sort of Star Trek reference but taken from writer Anton Chekhov, who famously said: "If in the first act you have hung a pistol on the wall, then in the following one it should be fired."

Serena's Satellite Phone is her character's gun. In this act, it was placed in her purse.That means, in the following one, it will be dialed. Right?

According to Serena Joy actress Yvonne Strahovski, fans can bank on it. Talking to TVLine, she said:

I don’t think she’s ever quick to reject anything, really. You might see that on the surface, but she takes away everything and thinks about it long and hard. She’s that kind of a person. She’s always going down each avenue and thinking what’s going to happen, manipulating the situation, so that is definitely a big thing for her to mull over and hold on for a little while until she decides what’s going to happen with that.

But fans should perhaps not hope that Serena's use of the phone will work in favor of Nichole's continued existence outside of Gilead. When asked what will drive her character to pick up the phone, Strahovski's answer was chilling:

She definitely finds it useful for what she set her heart on.

Considering what Serena seems to have her heart set on is bringing Nichole back to Gilead, despite everything she promised June, that should worry everyone. How long until June sees all her hard work to get the child to freedom undone?