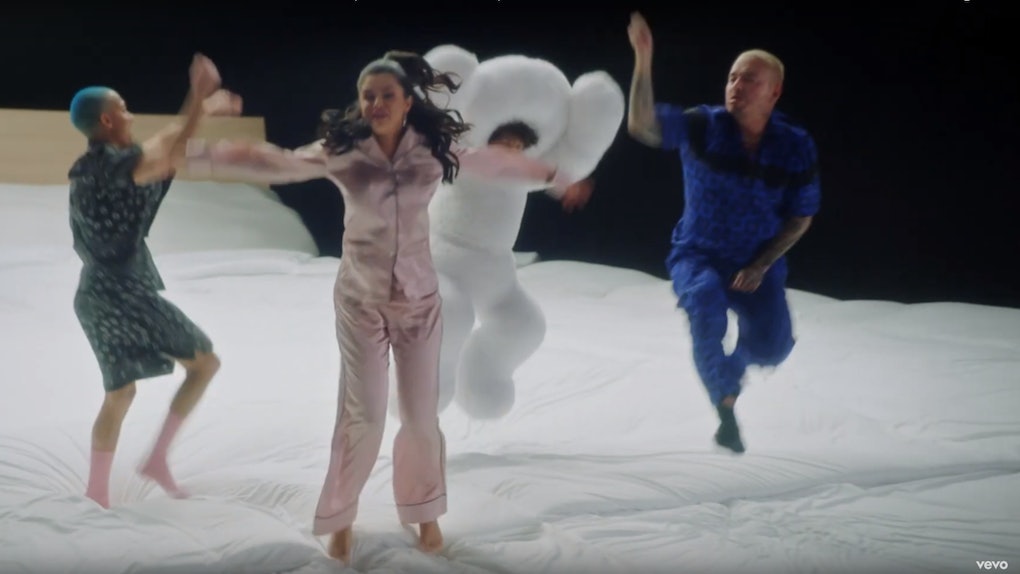 Selena Gomez is back at it with a new music video and this time, she’s bringing J Balvin, Benny Blanco, and Tainy along for the ride. Selena Gomez and J Balvin recently collaborated on a really fun song called “I Can’t Get Enough” and the video for it is equally thrilling. Selena Gomez & J Balvin's "I Can't Get Enough" video includes the two of them, along with Benny Blanco and Tainy, jumping up and down, dancing, and generally having the time of their lives on a massive bed. Sure, it may sound silly, but it’s actually a lot of fun and will definitely make you want to jump on a bed yourself.

In the intro for the “I Can’t Get Enough” video, you can see Gomez dressed in pink pajamas as she sleeps. The video then shows her waking up and walking on top of a huge bed. She’s then joined by J Balvin, Benny Blanco, and Tainy. During the course of the video, they all start jumping and dancing on the bed (which is basically the biggest bed in the universe) and just have a blast. It looks surreal, but also like a lot of fun!

The video kicks off with Gomez singing the following lines, which definitely set the scene for the whole thing:

Of the video, which was directed by Jake Schreier, Tainy explained that everyone wanted to make something that felt free and fun.

“On the video, we wanted to do something that felt special, iconic, but at the same time fun and just natural, nothing forced. I’m 100% sure we nailed it,” he said, according to Entertainment Tonight. “From talking about the idea and then being on set, it was mind-blowing. It really was impressive, so I hope the fans get a piece of what we felt when they see the video.”

Well, they certainly achieved that! Take a look at the video for yourself:

Everyone looks like they’re having so much fun. Even J Balvin expressed recently how much he enjoys working with this group of artists, especially Gomez.

"[She's] amazing! Such a humble girl," Balvin told ET during an interview at Premio Lo Nuestro. "Great person. I’m really happy she’s the way she is."

Tainy then jumped in to say he thinks Gomez is a “queen,” which only shows how much respect he has for her as an artist.

"She's a queen. It's such an honor to have her on my first single,” he said. “It's insane. Hopefully, we can continue to do some more work together."

All in all, it certainly sounds like Gomez, Balvin, Tainy, and Blanco had a great time recording this song and also making the video. I mean, the video looks like a total dream and, to be honest, I wouldn’t mind jumping on a bed that massive myself. My inner child is happy just watching the video and seeing everyone look so free. Massive bed aside, though, the “I Can’t Get Enough” video is so epic and bound to be a fan favorite in no time!