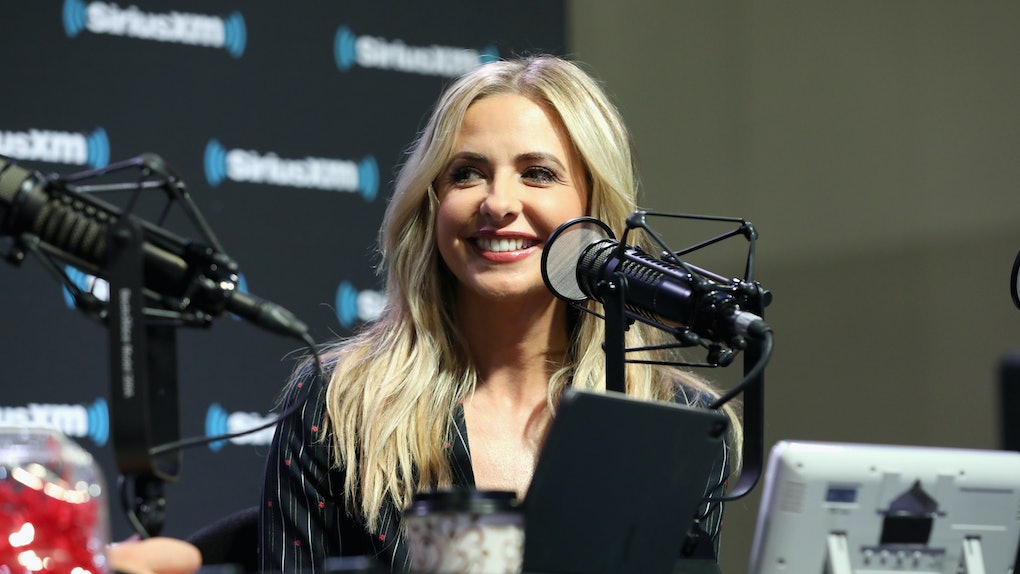 Did you catch the ad starring Sarah Michelle Gellar that aired Sunday, Feb. 3, during the first quarter of Super Bowl LIII? If you did, you may have thought you were watching a new trailer for an upcoming movie called Scream 15 or I Know What Else You Did Last Summer Again. Because Gellar's Olay Super Bowl commercial looked a lot like one of those vintage '90s slasher films the actress was once so famous for. I mean, there was even a guy chasing her around the house in a hooded robe and ghost face mask! And Sarah Michelle Gellar's comments about her Super Bowl ad will make fans really proud of what the ad means for women being represented on advertising's biggest night.

The spot, called "Killer Skin," marks the first time Gellar has ever shot a Super Bowl commercial, and it opens on a dark and stormy night — because this is a horror spoof we're talking about here, so is there any other kind of night?

Anyway, the Scream queen is just hanging out on the couch with a male friend and a big bowl of popcorn when the pair suddenly realize they're not alone in the house. They run upstairs to escape a masked villain and try to call 911, only — plot twist! — Gellar's skin is so smooth and youthful from using Olay that her phone doesn't recognize her and won't unlock.

I'm loving the fact that Gellar was down to spoof the kind of roles that made her famous. And her collaboration with the beauty brand seems like a no-brainer, considering the actress' skin is pretty damn killer.

"I’ve used Olay’s products for years so when I got the call to be in the ad and saw the creative, I felt like it was such a natural partnership," Gellar tells Elite Daily. "Olay’s take on a horror, yet comedic, Super Bowl ad was so funny. I was hooked after I read the script."

In addition to giving us all the slasher film nostalgia we didn't even know we needed, Gellar was also pretty psyched to be part of Olay’s efforts to bring more women to the forefront of advertising’s biggest stage.

"It has been an unbelievable experience to work with a brand like Olay, who is trying to change the male-centric narrative around the Super Bowl and Super Bowl advertising," she explains. "Currently, only about a quarter of Super Bowl commercials feature a woman as the lead character and I’m so excited that I get to be a part of that change."

The actress — who was rooting for the Rams, by the way — got to attend the game with a group of Olay influencers, including Lilly Singh and Aly Rasiman, who are collectively known as the Fearless 9.

"It has been such a pleasure working with each of these ladies," she gushes "To me, being fearless is unique to everyone’s individual journey and each of these girls represent a different form of fearlessness."

And while sadly, we now know she probably won't be reprising her iconic role as the fearless Buffy in the Buffy The Vampire Slayer reboot, we will be seeing Gellar back on our small screen soon. She'll be playing Amber Reynolds — a woman who wakes up in a hospital bed unable to move, speak, or open her eyes — in Sometimes I Lie, a limited series based on Alice Feeney’s debut novel of the same name.

"I cannot wait to see it come to life," she says about the new project. "The series is based on a book that I absolutely fell in love with and I knew after I finished it that I wanted the story to be my next project."

Sounds killer to me!