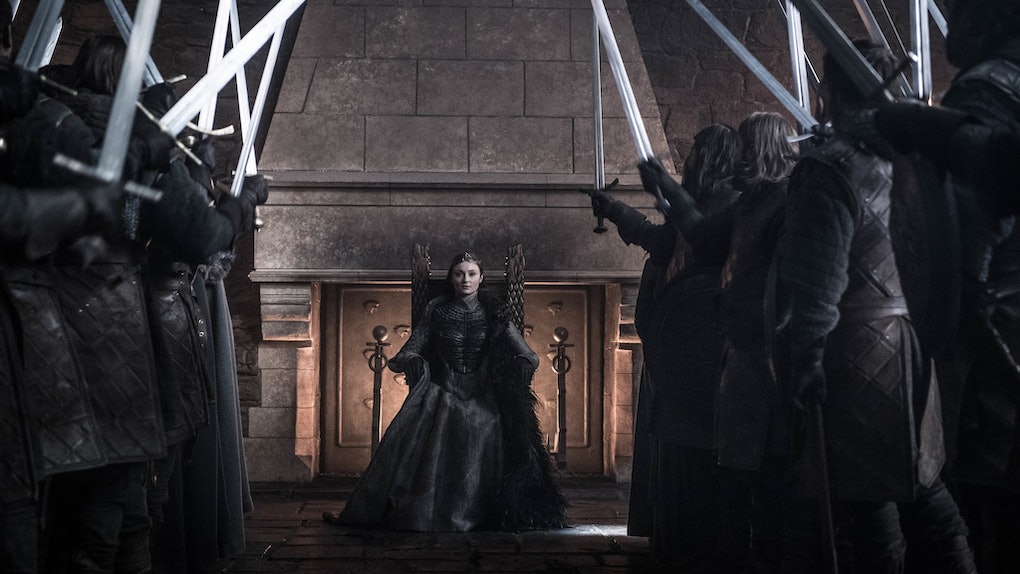 Sansa's Crown In 'Game Of Thrones' Was Red-Wedding Inspired, Because The North Remembers

Game of Thrones was one of the most elaborate shows ever created for television. It had multiple locations in several countries to create the feel of a story that spanned continents. It encompassed entire subcultures all across Westeros and Essos, including food, architecture, and most important, clothing. The costume designs, created by Michele Clapton, are some of the most stunning of any show that aired in the 2010s. And as fans dig deeper, more clues about their inspirations spring forth. For example, months after the finale, viewers are now just learning Sansa’s crown in Game of Thrones has a special meaning behind it.

Sansa Stark's costumes have been some of the most detailed in telling her story over the years. From her earliest outfits as a northern girl and her adoption of the styles of the Southron women in the first three seasons to her different experiments with "power" outfits from Season 4 onward, every dress is an insight into her mindset.

So naturally, when Sansa is coronated as The Queen In The North in the series finale, taking what is rightfully hers, the entire costume was filled with meaning. In an excerpt from Insight Editions' book, Game of Thrones: The Costumes in Vanity Fair, designer Michele Clapton breaks the references down.

The sleeves, for instance, were decorated in scales, a reference to her Tully mother's house symbol. It also was trimmed with feathers, in which was worked a direwolf's head. The wolf's head is a reference to Sansa's late wolf Lady. The raven are feathers from her Season 4 "Dark Sansa" look from when she was working with Littlefinger.

The skirts are embroidered with red leaves of the weirwood tree for her father, her brother Bran, and all those who still honored the Old Gods. The armored girdle around her bodice also recalls the weirwood branches, as Clapton puts it: “growing upward to show hope for the future of the North.”

Also, Clapton points out that Sansa's cape is lined with rabbit fur, a callback to the capes worn by the Stark children in the first season. It's also just so slightly asymmetrical, a call back to Arya's cloak in Seasons 7 and 8.

Then there was her crown. Fans noticed right away that it was adorned with two heads of direwolves, the longtime symbol of House Stark. The wolves are depicted nuzzling each other, loyal to each other, faithful to the house, loyal until the end.

But according to Clapton, the crown also called back to another Stark piece of jewelry. Sansa's late brother, Robb Stark, who was crowned King In The North at the end of Season 1, wore a broach just like it in his final scene in the series. It was front-and-center the night he died, in the infamous Red Wedding.

And the answer was: "The North Remembers."