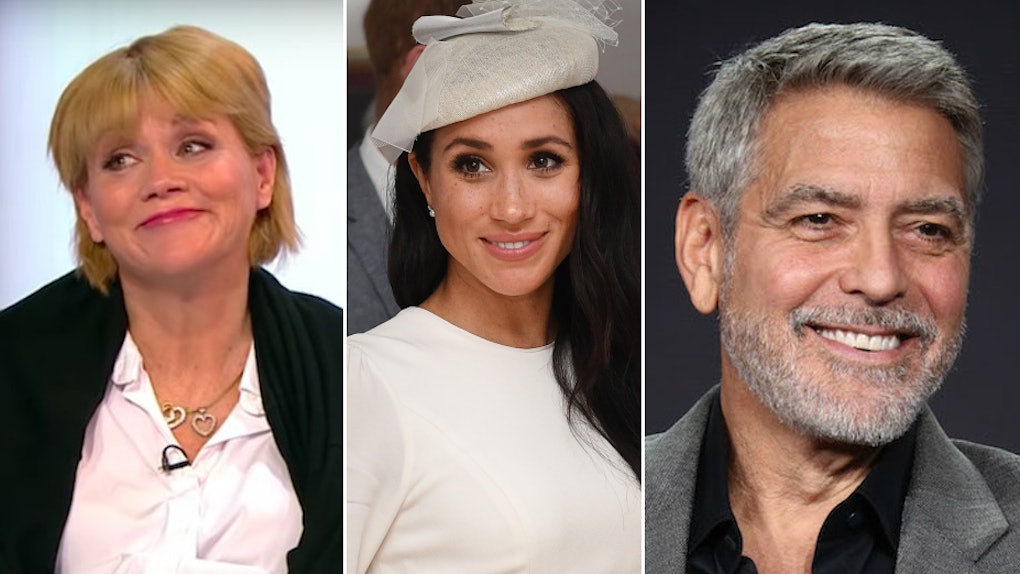 Samantha Markle is making headlines again, this time for her attacks on actor George Clooney. In recent days, Clooney has come to Meghan Markle’s defense amid all the negativity about her in the media. Apparently, Samantha Markle didn’t take kindly to Clooney saying anything positive about her half-sister and decided to lash out on social media. Samantha Markle’s tweets attacking George Clooney for defending Meghan are over the top at best. Elite Daily reached out to Samantha Markle's team regarding her tweets, but did not hear back by the time of publication.

In an interview with Australia’s WHO Magazine, Clooney opened up about what he seems to think is an injustice in the way the media treats Meghan.

"They're just chasing Meghan Markle everywhere, she's been pursued and vilified,” Clooney said. “She's a woman who is seven months pregnant and she has been pursued and vilified and chased in the same way that Diana was and it's history repeating itself. We've seen how that ends. I can't tell you how frustrating that is, just seeing them broadcast a letter from a daughter to a father, she's getting a raw deal there and I think it's irresponsible and I'm surprised by that."

It was these rather empathetic comments that set Markle off and prompted her to unleash a series of tweets in which she attacked Clooney.

"Hey Looney Clooney! Your lawyer wife should have taught you not to make statements without full facts,” Markle wrote, according to Cosmopolitan. “I doubt #GeorgeClooney would ghost his mother for no legitimate reason. Be quiet Georgie." Elite Daily reached out to Samantha Markle's team regarding her tweets, but did not hear back by the time of publication.

So, it seems that no one is safe from Markle's wrath, not even George Clooney. Clooney’s comments come just days after a private letter of Meghan’s was leaked to the Daily Mail. The letter was reportedly sent to Thomas Markle by Meghan and addressed all the ups and downs the father-daughter pair had experienced in the weeks leading up to Meghan’s May 2018 wedding.

“Your actions have broken my heart into a million pieces — not simply because you have manufactured such unnecessary and unwarranted pain, but by making the choice to not tell the truth as you are puppeteered in this. Something I will never understand,” Meghan wrote, according to the Daily Mail.

While many people would feel sympathy for Meghan after reading these words, Markle's reaction to the letter was a bit different. Samantha opened up to British tabloid Daily Star Online with her thoughts on the letter.

Yikes. It’s obvious there’s a lot of bad blood between Meghan and Samantha Markle, and it’s unfortunate that they can’t handle it behind closed doors. Hopefully, everyone involved will be able to find some semblance of peace in the coming months or years because this whole situation is getting out of hand.

More like this
Meghan Markle's Wreath For Prince Philip's Funeral Was Full Of Meaning
By Cianna Garrison
Gottmik Has Already Made 'RuPaul’s Drag Race' History, Win Or Lose — EXCLUSIVE
By Jonathan Borge
Bryce Hall Is Reportedly Being Sued For Starting A Fight At An L.A. Restaurant
By Brandy Robidoux
Stay up to date