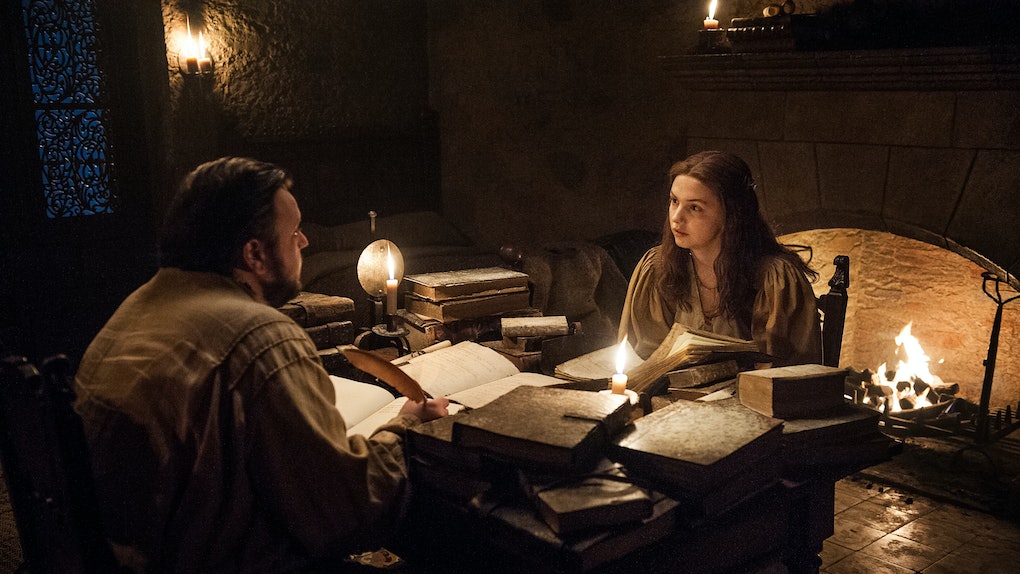 Sam Helped Write 'A Song Of Ice & Fire' On 'Game Of Thrones,' So Everyone Can Breathe Easy

Game of Thrones is a story that tells the history of the continent. For many years, fans have wondered if it's a story within the story, that is, was there a character who was author George R.R. Martin's avatar, a stand-in writing A Song of Ice and Fire this whole time. Those who believed Martin's avatar was Tyrion poo-pooed the idea, but those who thought Martin's real stand-in was Sam knew it would turn out to be true. And lo and behold, Sam helped write A Song Of Ice and Fire on Game Of Thrones. Warning: Spoilers for Game of Thrones Season 8 follow.

As Game of Thrones' finale drew to a close, King Bran the Broken, Lord of the Six Kingdoms and Protector of the Realm had Tyrion, his Hand, put together the Small Council for the first significant meeting of the minds. Bronn, as ruler of Highgarden and the Reach, was the Master of Coin. As befitting a former smuggler, Davos was the Master of Ships. Brienne, is the Head of the Gold Cloaks, aka the Kingsguard, with Pod as Bran's personal assistant.

And Sam is the Grand Maester for King's Landing, in robes befitting his station and wearing a full chain for the first time.

When Sam arrives for the meeting, he is carrying a gigantic book with him. He's clearly excited about it and immediately hurries up to present it to Tyrion ahead of the meeting. When Tyrion asks what it is, Sam proudly declares it's called "A Song of Ice and Fire," and it's a history of everything that's happened since Robert's Rebellion. He notes he did not write it himself, "Archmaester Ebrose" did, who fans will remember was the Maester played by Jim Broadbent, who Sam worked for during his disastrous time at the Citadel in Season 7. But Sam helped with the history, and, far more importantly, he helped with the title.

But the best part comes when Tyrion, who viewers know is one of the key players in the story, working as Hand to Joffrey and then Daenerys and now Bran, asks how he is described in the book's events. He assumes at first he is in for some heavy criticism. When Sam says no, he wonders if he got off light.

In fact, he's not in the story at all.

To be fair, this is very much in line with how Martin has always portrayed history. Those who make it, the ones behind the scenes, the puppet masters, they don't get mentioned. Kings and Queens do, as do dragons and great generals. But those like Varys, Tyrion, Qyburn, and so on? They never make it onto the page. They are the unmentioned makers of history, forgotten as soon as they are gone, even if their ideas, like democracy, live on for generations long after.

In the years to come, people will read A Song of Ice and Fire and how Bran the broken, the benevolent king, began democracy. But the won't remember it was Tyrion who got him elected or who said forever after to hold elections for replacements.

After all, that's not really very ice or fire, now is it?