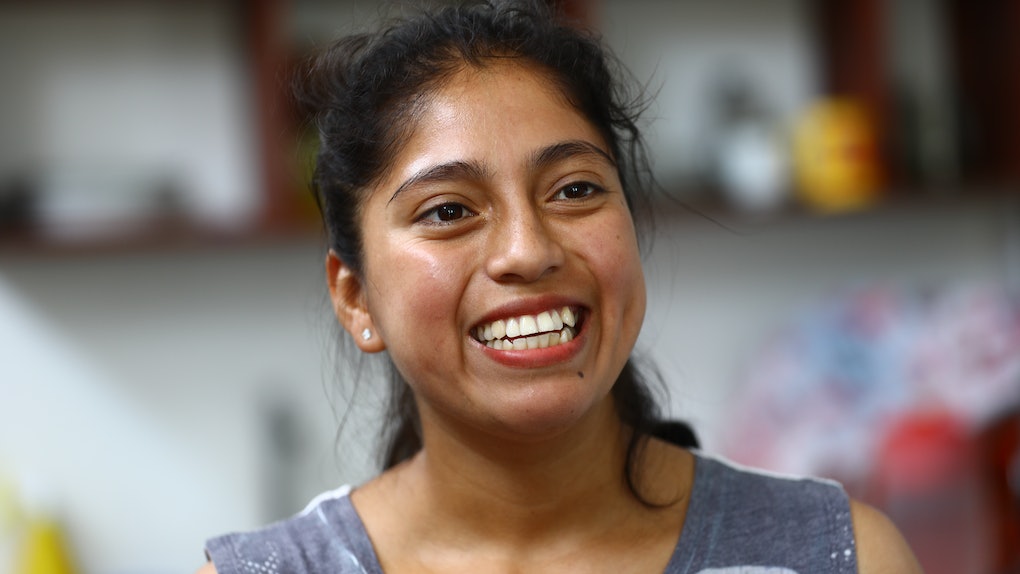 Grecia is a businesswoman at heart. Like any other millennial with ambition, the 26-year-old from Lima, Peru, knows all about hustling to make her dream come true, and in this case, that dream is a pharmacy. In the living room of her cool, whitewashed home with a ficus tree on the porch, she describes where the business addition will go. “There is, in the back, a small area,” she says via a translator, gesturing to the door behind the kitchen sink with a hand wrapped in a ‘90s-style scrunchie. “I want to have a small pharmacy in that area.” She visibly brightens talking about her plans. “When I talk about a pharmacy, I get excited because that’s what I like,” she explains. “I’ve studied to be a pharmacist.” Recently, she’s taken a big step towards making that dream happen — she’s finally gotten running water in her home. “The hygiene is something very important and it has to be proper hygiene, for a small pharmacy," she says.

Women and girls are responsible for water collection in 80 percent of households without access to water on the premises.

And as in many things, women can frequently have it worse. According to a 2011 study out of the University of Pennsylvania, when clean water is not available in a home, it’s most commonly women who take on the task of fetching it, a task which can average nearly an hour a day. And in terms of sanitation, women can be left vulnerable to assault or violence while relieving themselves outdoors. Grecia had a particular challenge — since her husband worked, she had to haul water alone during her risky pregnancy with her now-2-year-old son, putting both mother and child in potential danger. "There was nobody to help," she remembers.

Even without the threat of physical harm, lack of running water can take its toll — every moment a woman is hauling water or thinking about a place to relieve herself is a moment that she can’t work, or go to school, or plan her future. “Women and girls are responsible for water collection in 80 percent of households without access to water on the premises,” Silke Staab, a researcher with UN Women and the report manager for the Turning Promises Into Action report on gender equality, tells Elite Daily by phone. "If you don’t have water and sanitation at home, the basic tasks that we very often take for granted" — like brushing your teeth or doing laundry — "become really, really onerous and time-intensive. And that means for poor women, the lack of water access exacerbates and deepens their poverty.”

The real-life effect of no running water becomes blindingly clear on the way to visit Grecia and her community in the outskirts of Lima. Before heading out on the two-and-a-half hour drive, everyone makes sure to use the bathroom, unsure of when we'll get the next opportunity. We stop again at a supermarket about an hour later, where we’re charged 50 cents each to use a small three-stall bathroom with no seats on the toilets and a wide-open door leading to the street. An attendant hands us some five or six squares of toilet paper after we pay the fee; there’s no paper in the stalls. But even this small measure of privacy may be unattainable for the about 7 million Peruvians living on less than 338 soles ($105) a month — that 50 cents might be needed elsewhere.

That constant consideration of how you’re going to access water or a toilet is what Gary White, the CEO and co-founder of international water charity Water.org, calls “coping” behavior. “You have all this uncertainty built into your day,” he says. “And uncertainty means that you can’t be productive, and you can’t improve the income and the health of your family.”

It’s part of the challenge being tackled by Water.org’s Water Credit program, which uses a microfinance model to help people install toilets and water in their homes. The program has a simple concept: help people obtain small loans, which they then use to improve the water and sanitation in their homes. The program is impressive in its local-to-international scope — at the local level, it’s facilitated by local microfinance lenders who benefit from Water.org training, and who have the community ties to help streamline the process and the cultural knowledge to connect with their clients. At the international level, Water.org has a partnership with beer brand Stella Artois, which has worked with the organization since 2014. In early 2019, the beer brand launched the Pour It Forward campaign, which gives a portion of sales of the beer from some locations, as well as proceeds from the sale of speciality Stella chalices, to the program. Stella credits the partnership with having reached some 1.7 million people worldwide since 2015, and is aiming to more than double that number by 2020.

The program's focus on helping individuals install water in their homes is part of what Staab, who is not affiliated with Water.org or Stella, calls "the last mile." She points out that even when resources like water and electricity are available in communities, low-income households don't always have the means to pay for connections. "So the [water] network and the [electricity] grid aren’t actually so far away, but wiring the home for electricity is out of reach, because the household doesn’t actually have the resources," she explains.

The ratio of impact is significant. In Peru, the average loan is about $1,228, and, according to Water.org, they have disbursed over 450,000 loans nationwide. In fact, in Peru alone — which has a population of about 31 million — the charity estimates they’ve reached 1.6 million people. Because the loans are small, it’s not difficult for people to pay them back within a year, and Water.org estimates they have a 99 percent repayment rate in Peru. That means that the money can then cycle back into the system and be loaned out again to help another family and home, giving the program a much farther reach than a simple donation model. White notes that there's just not enough resources out there for philanthropic organizations to simply give money to the some 2.5 billion people living without sanitation. "There’s just not enough charity," he says.

White also points out what becomes increasingly obvious as you add up the time spent or saved. “Once you’re relieved of this time that you spend coping, and once you become more certain of your water access, then we do see people going out and getting those paying jobs.” Anecdotally, he shares a story about asking a group of women in India how many of them had gotten jobs since they got running water. "About half the hands in the circle went up."

Accessing these resources can also help women grow the businesses they already have. Across the neighborhood from Grecia, 47-year-old Guadalupe runs a beauty business out of her home, with a cabinet full of beauty supplies in the bedroom she shares with her husband, Rubén, 56. But her lack of a bathroom affected her business. "Before, if I had a client who want[ed] to come in, and they say 'Oh, do you have a restroom? Can I use your restroom?' I would say no because I didn’t have one," Guadalupe says. She admits that it made it difficult to have clients, as she was embarrassed to admit that the family had no indoor bathroom. "And now I can,” she finishes. With their loan, the family has built two full bathrooms in their home, and is in the process of building a third specifically for guests.

It's helping the next generation of women pursue their dreams, too. Rubén proudly shows off the private bathroom he built for his 22-year-old daughter, who's currently studying at university. He thinks that without a bathroom, it would have been much harder for his daughter to focus on her studies and succeed. "It would have been very difficult for her [to go to university], to develop herself," he says.

When Grecia got her loan through local microfinance lender MiBanco, she was adamant that the loan be in her name and not her husband’s. “Because we as a couple, we are independent,” she says, noting that they make the effort to support each other and their dreams. “I like to do my own things. To have my own accomplishments, to have goals. It’s a vision.” She’s used the money and the time that her water access has given her to develop her plan for a pharmacy, and is currently looking at potential suppliers. Ultimately, she wants to have more than one business, although she doesn't yet have a complete plan.

I always want to improve.

Of course, as far as she's come, there's still more to do. Because Grecia and her husband don't have an official title to their home, they haven't been able to get hooked up to the main water line, so that's the next step. (Their water access currently comes from a storage tank connected to their indoor plumbing.)

While Grecia is dreaming big for her business, she's also thinking about the little things that water access can give her — like her ficus on her front porch, the only spot of cool green in the otherwise dusty neighborhood. "I would like to have a small garden with plants, maybe have some pets or animals," she envisions. Her husband, she explains, loves plants too.

"I always want to improve," she smiles.

More like this
Here's How To Enter Hotels.com's Tax Write-Off Vacation Giveaway For A Chance At $2,700
By Lara Walsh
The More Contagious B-117 COVID Variant Is Now The Most Common Strain In The U.S.
By Rhyma Castillo
Universal Studios Hollywood's Ticket Restrictions For April 2021 Include Major Limits
By Cianna Garrison
Stay up to date