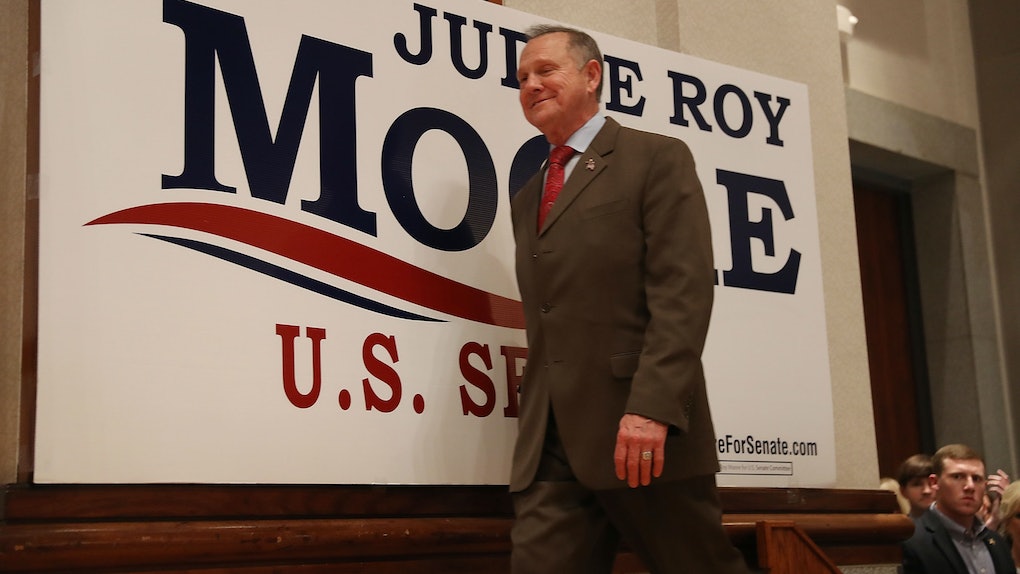 Roy Moore's Complaint About The Alabama Election Calls For A Re-Do, But It Won't Do Much

More than two weeks after losing to Democrat Doug Jones, former Republican Senate candidate Roy Moore still has not conceded defeat in the Alabama special election held earlier in December. To the contrary, Moore's campaign is actively fighting against the result of the election and filed a lawsuit in Alabama on Wednesday night, Dec. 27, alleging "systematic voter fraud." Roy Moore's complaint about the Alabama election also calls for "a new special election" to determine a winner.

"This is not a Republican or Democrat issue as election integrity should matter to everyone," Roy Moore said in a statement, according to AL.com. "We call on Secretary of State Merrill to delay certification until there is a thorough investigation of what three independent election experts agree took place: election fraud sufficient to overturn the outcome of the election."

Will Moore's Lawsuit Have An Effect On The Election's Result?

Moore's lawsuit was filed less than 24 hours before Alabama's secretary of state, John Merrill, was expected to certify Jones' victory in the Alabama special election. On multiple occasions, Merrill has deemed it highly unlikely that the result of the election would be re-examined.

"The people of Alabama have spoken tonight," Merrill told CNN's Jake Tapper on the night of the special election. "They've made their voice heard loud and clear. The most important thing to remember now is the process needs to be followed to ensure that the integrity, the safety and security of the election is preserved. One of the things that is obviously recognized by using the equipment that we use in the elections process is that there's not a whole lot of mistakes that are made."

Earlier in the night, Dec. 12, Roy Moore told supporters that the election's results were not conclusive.

Days later, on Dec. 15, Merrill again cast doubt on the idea that the special election result should be contested, saying, "I have not seen any irregularities or any inconsistencies that are outside the norm."

On Wednesday, Merrill again said that he would not delay certification of Jones' victory, telling the Associated Press, "It is not going to delay certification and Doug Jones will be certified [on Thursday, Dec. 28] at 1 p.m. and he will be sworn in by Vice President Pence on the third of January."

On Wednesday night, Moore reasserted his claim that his is innocent in regards to accusations of sexual misconduct with women when they were teenagers. The accusations were reported in the run-up to the election and includes an allegation of molestation.

"It's appalling that the Democratic Senate Majority PAC and the Republican Senate Leadership Fund both spent millions to run false and malicious ads against me in this campaign" Moore said in the statement reported by AL.com.

The Effect On Congress

Doug Jones' victory — which was claimed by a margin of over 20,000 votes —now tips the balance of the Senate and cuts an already-slim Republican majority down from 52-48 to now 51-49.

Looking ahead to 2018, Senate Majority Leader Mitch McConnell (R-KY) has said that Jones' election is one factor that makes it likely that the GOP will abandon hopes of a repeal of the Affordable Care Act (also known as Obamacare) and look to enact more legislation that can gain bipartisan support.

The Alabama special election was held to permanently fill the seat formerly held by Attorney General Jeff Sessions, who left Congress earlier in 2017 after being nominated by President Donald Trump to become head of the Department of Justice. Doug Jones is now set to serve the three years that are left on Sessions' original term, which the attorney general won in 2014.