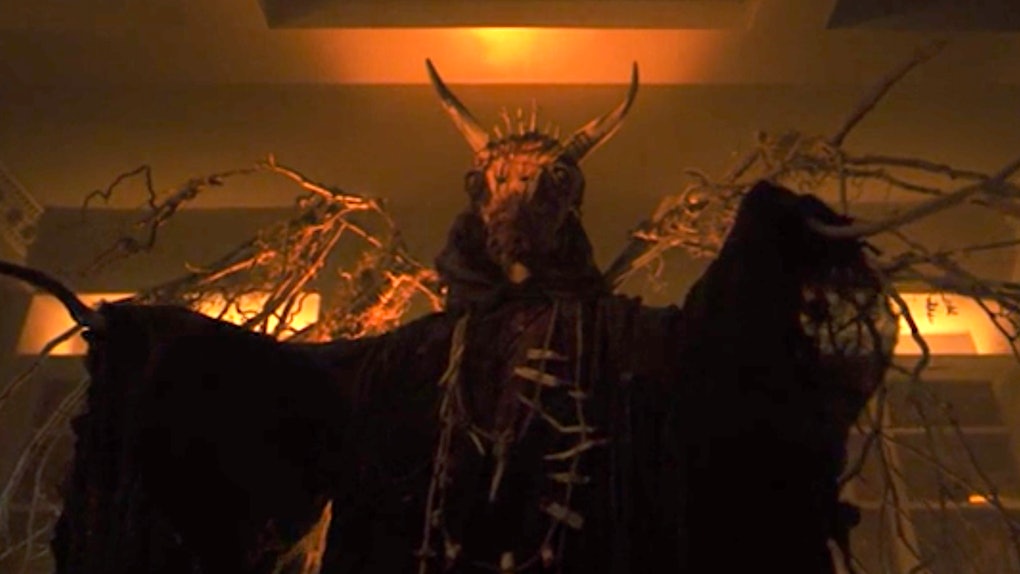 'Riverdale's Gargoyle King Will Be Revealed At The End Season 3, According To The Showrunner

Riverdale's midseason finale may have included a bunch of wild twists, but it still did not provide an answer to Season 3's central mystery: Who is the Gargoyle King? And unfortunately, it sounds like we are not going to find out who is under that skull mask anytime soon. Riverdale showrunner Roberto Aguirre-Sacasa revealed in a new interview with TVLine that Riverdale's Gargoyle King will be revealed at the end of Season 3, so we have some waiting to do.

Spoiler alert: This post will contain plot details from Riverdale Season 3 Episode 8, "Outbreak." Following Wednesday night's tense midseason finale, speculation and theories about who could be the Gargoyle King is at an all-time high within the Riverdale fandom. The episode gave us some important new revelations about the mysterious serial killer — the Gryphons and Gargoyles game that his character is based on was created at the Sisters of Quiet Mercy, Fizzle Rocks cause people to hallucinate him, and it was confirmed it is not Hiram Lodge — but the Gargoyle King's identity is still a total mystery.

And unfortunately, that mystery is going to keep haunting us throughout the rest of Season 3. Showrunner Roberto Aguirre-Sacasa said in a recent interview with TVLine that he does not know when viewers will finally learn the truth about the Gargoyle King, but promised the identity would be revealed by the end of the season.

You will for sure find out by the end of the season, not quite sure how soon you will.

Hmmm, well if he does not know when we will find out about the Gargoyle King right now, then that probably means the reveal has not yet been fully scripted out, right? Since we are already coming up on Episode 9 of the season, that makes it definitely seem like the big Gargoyle King mystery won't be solved until the very end of Season 3, which makes sense. Of course Riverdale would want to save its big reveal for the season finale; that's just TV 101. It also mirrors how the show's second season went. The Black Hood murderer was a major mystery throughout all of Season 2, but the killer's true identity was not revealed until the season finale.

While this does ensure that the Riverdale Season 3 finale is going to be a can't-miss episode, the bad news is that fans will have to wait for quite some time before we learn the truth about what is going on this season. Currently, almost every single character on the show has been suspected of being the Gargoyle King by one fan or another, but the biggest suspects are the town's shady parents, who first discovered Gryphons and Gargoyles back in the '90s. It seems that the midseason finale crossed prime suspect Hiram Lodge off the list of possibilities, though, since he is seen in a room with the Gargoyle King.

Another major suspect is a character we have not even seen yet: Edgar Evernever. The Season 3 premiere brought the mysterious cult The Farm into town, as Alice and Polly became more involved. But although the cult's leader Edgar has been mentioned several times, we still have not seen him. Hopefully the second half of Season 3 will give us more info on The Farm and finally bring Edgar into the mix pretty soon.