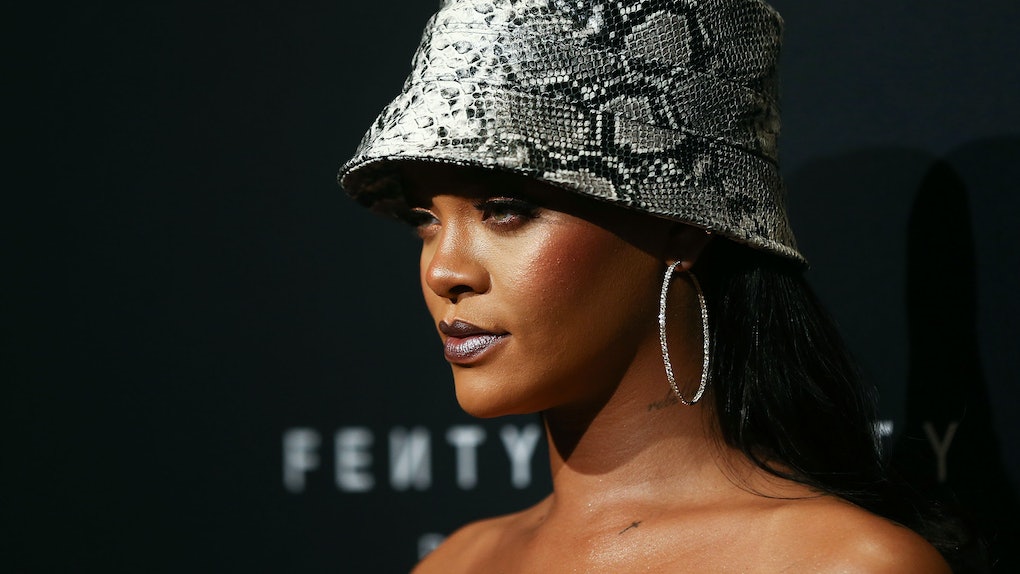 Rihanna's Quote About Being In Love Has Me Actually Screaming

They've been rumored to be dating for a while now, but Rihanna's quote about being in love — yes, love — during her June 10 interview with Sarah Paulson for Interview magazine confirms RiRi is pretty serious about her most recent bae. Ah, so exciting! Before we get into all of her mushy gushy feeeeelings, let's talk about who the guy even is.

When Paulson asked who she was dating, Rihanna responded, "Google it." Iconic. I'll spare you guys from having to Google it and give you the scoop here: Rihanna is dating billionaire Hassan Jameel. The two were first spotted making out in Ibiza in June 2017 and, while she's never publicly spoken about it until her interview with Paulson, things have apparently only gotten steamier from there.

When Paulson asked if she was in love, Rihanna responded by saying: "Of course I am." OK, so are they going to get married? Well, here's where things get extra interesting. Rihanna didn't say they were getting married...but she didn't say that they weren't getting married, either.

"Only god knows that, girl," she responded. "We plan and god laughs, right?"

Whether or not they do tie the knot, Rihanna did make it clear that she's ready to start a family. In fact, when asked if she wants to be a mother, she responded by saying, "More than anything in life."

So how have Rihanna and Jameel, two extremely rich, presumably busy people, manage to make time for falling in love? Well, RiRi admits she literally had to pencil it in her schedule.

"It’s only the last couple years that I started to realize that you need to make time for yourself, because your mental health depends on it," she explained. "If you’re not happy, you’re not going to be happy even doing things that you love doing. It’d feel like a chore. I never want work to feel like a chore. My career is my purpose, and it should never feel like anything other than a happy place. I’ve made little things a big deal, like going for a walk or going to the grocery store. I got into a new relationship, and it matters to me. It was like, 'I need to make time for this.' Just like I nurture my businesses, I need to nurture this as well. I’ll shut things down for two days, three days at a time. On my calendar we now have the infamous 'P,' which means personal days. This is a new thing."

Yep, she literally puts a "P" in her calendar for the days she wants to chill and focus on herself. Oh, she also notes that "it's a different color than all the other events." She obvi still gets tons of people bothering her about work stuff on "P" days, but she notes "I’m fine doing e-mails."

And if you're even thinking about trolling Rihanna and her bae online, don't bother. Or do. It will make no difference to her.

"I have to say, I’ve always had pretty tough skin — even as a little girl, which was completely due to my parents. They never sheltered me in any way," she told Paulson. "They would tease me, and I would tease them right back. By the time I got to school, I always had this feeling like the kids were stupid. Maybe that was god’s way of preparing me for what my life was going to be like. I don’t feel any way about people’s comments. I remember being a kid and being like, “Wow! I’m in a chat room. I can say whatever I want. They don’t know how old I am. They don’t know who I am, or where I am.” There’s that idea of being a child behind a screen and having that feeling like you can say anything. That child is who I imagine behind a comment every time I see one. They would never say that to my face. They probably wouldn’t even say hello."

See ya later, bye to all the haters out there. RiRi's to busy building an empire and being blissfully in love to care about you.