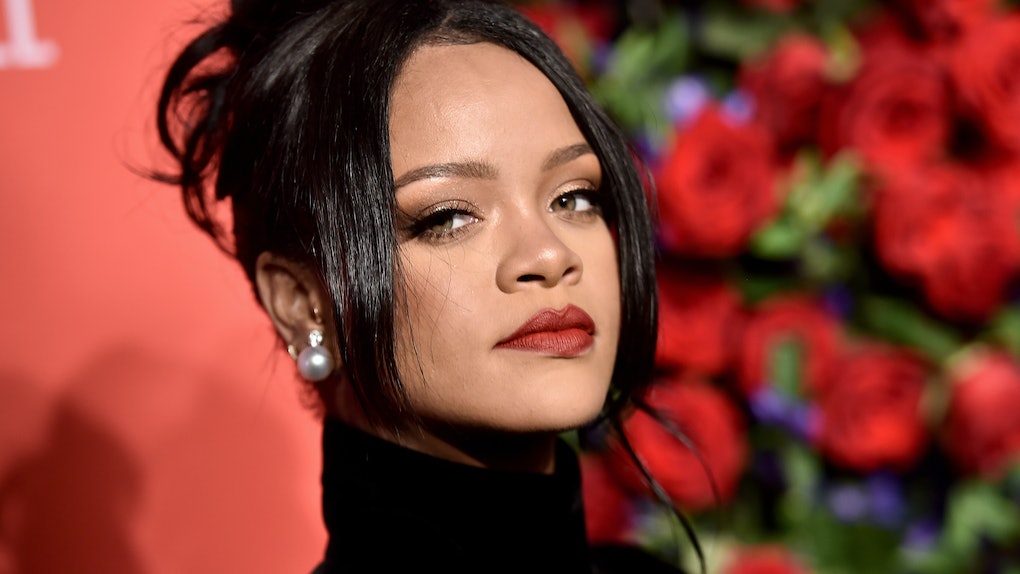 Rihanna Confirmed She’s In An “Exclusive Relationship” & OMG, This Is Major

It's been a hot minute since Rihanna released any new music, but it's safe to say she's been absolutely crushing the beauty world. And, ICYMI, she's also been totally thriving in her love life. Try not to get too excited, but Rihanna confirmed she's in an "exclusive relationship" during an interview with Vogue for their November 2019 issue. In true Rihanna form, she didn't divulge too many details, but casually admitted that she is, in fact, cuffed.

"Yeah, I'm dating," she told the magazine. "I'm actually in an exclusive relationship for quite some time, and it’s going really well, so I’m happy.” Oh, and one more personal tidbit she decided to throw in there? She wants kids, "without a doubt.”

In addition to the standard interview for the November issue, Rihanna also recorded a video interview with none other than Anna Wintour called Go Ask Anna. In the video, Wintour covered some topics similar to those in Rihanna's print interview. For instance, she asked Rihanna if she wants kids, but this time Rihanna was a little more hesitant than she was when she said she'd want them "without a doubt."

"I don't think about stuff like that, but God's plan, but I look forward to all of the pregnancy rumors after this interview," she joked in response to Wintour's question.

In the interview with Wintour RiRi also opened up about her dream wedding dress, noting that it would "of course" be a "collaboration between myself and [John] Galliano."

Although she didn't confirm the name of the person she's in an exclusive relationship with, chances are , it's most likely Saudi businessman Hassan Jameel, who Entertainment Tonight reports she's been linked to since October 2017. This isn't the first time she's alluded to her reported relationship with him. During a June 10 interview with Sarah Paulson for Interview magazine, she responded to a question about whether or not she's in love by saying, "Of course I am."

When Paulson asked if Rihanna planned on marrying the man she's in love with, Rihanna played it cool by leaving it up to God. "Only God knows that, girl," she responded. "We plan and God laughs, right?"

In the same interview, Rihanna opened up about how she manages to take a break from her personal life to make time for her relationship.

"It’s only the last couple years that I started to realize that you need to make time for yourself, because your mental health depends on it," she explained. "If you’re not happy, you’re not going to be happy even doing things that you love doing. It’d feel like a chore. I never want work to feel like a chore. My career is my purpose, and it should never feel like anything other than a happy place. I’ve made little things a big deal, like going for a walk or going to the grocery store. I got into a new relationship, and it matters to me. It was like, 'I need to make time for this.' Just like I nurture my businesses, I need to nurture this as well. I’ll shut things down for two days, three days at a time. On my calendar we now have the infamous 'P,' which means personal days. This is a new thing."

Here's to plenty of P's in her planner to spend time with her exclusive partner.