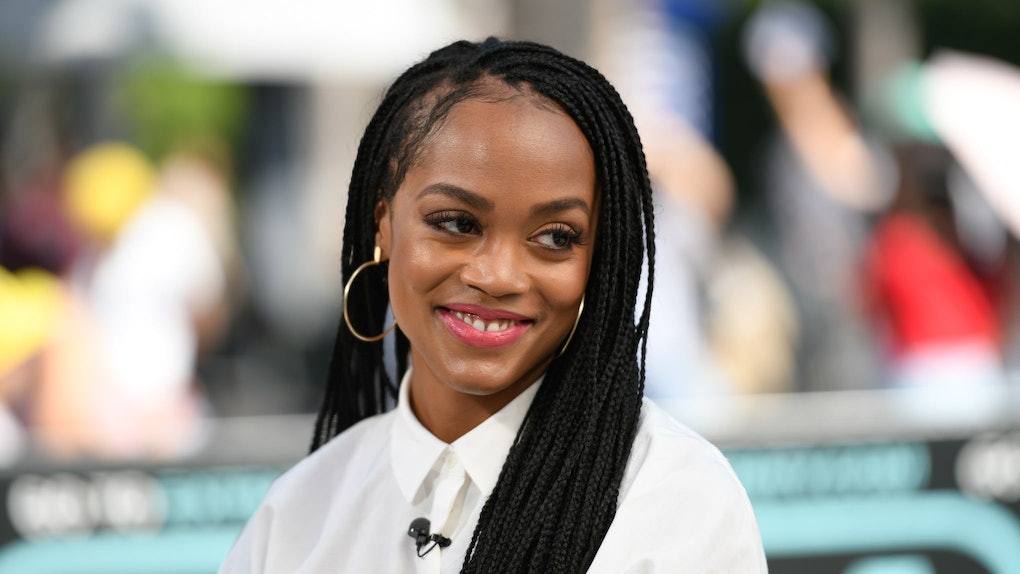 Rachel Lindsay is taking a step back from Bachelor Nation. And she's making big changes to do so, including saying farewell to a popular Bachelor Nation podcast. Yep, you read that right: Rachel Lindsay's final Bachelor Happy Hour podcast episode is coming soon.

On Tuesday, April 27, Bachelor Happy Hour announced Lindsay's final episode would air on Tuesday, May 4. Apart from marking her exit as co-host, the episode will also serve as a special celebration of the podcast reaching its 100th episode. "We started talking about how much fun it is and the community we started, and we're here with the 100th episode, and I'm so proud of [the podcast] and where it's come," Lindsay said during Bachelor Happy Hour's April 27 episode. "Thank you for riding with me for such a long time. Continue to ride with [current co-host] Becca [Kufrin], support her, and uplift her and this podcast as well." Lindsay and Kufrin also announced that a new co-host will join Kufrin, but fans will have to wait a little longer to find out exactly who that person will be.

Lindsay made history as the first-ever Black Bachelorette when she headlined Season 13 of the popular dating show back in 2017. Since then, she's become a major representative of the franchise, with duties including co-hosting Bachelor Nation's official podcast, Bachelor Happy Hour, since July 2019 and appearing on multiple other Bachelor Nation seasons.

But the media personality has been open about her issues with the franchise for a while, particularly in regards to its historically problematic handling of diversity and racism. After her season aired, Lindsay critiqued the show for portraying her as "an angry Black female," and for literally casting a racist contestant. She also called out the franchise's failure to properly advocate for its leads of color, particularly after Matt James' tumultuous season as the first-ever Black Bachelor.

These issues came to a head in February, after Lindsay's controversial Extra interview with longtime Bachelor host Chris Harrison went viral. In defending Matt's frontrunner Rachael Kirkconnell following reports about her past racism, Harrison repeatedly shut down Lindsay's own perspective. He has since apologized for the interview and stepped back from the franchise for an undisclosed period of time, but Lindsay received so much harassment from certain Bachelor Nation fans that she temporarily deactivated her Instagram account. A few days after the Harrison interview, Lindsay said she wouldn't renew her Bachelor contract.

"I'm exhausted. I have truly had enough," she said on the Feb. 12 episode of her podcast Higher Learning, adding that she has a "love/hate" relationship with the Bachelor franchise, on which she met her husband Bryan Abasolo. "It did stuff for me, and I'll never forget that. But how much more do I want to be affiliated with this?" Lindsay continued. "I'm contractually bound in some ways, but when it's up, I am too. I can't do it anymore."