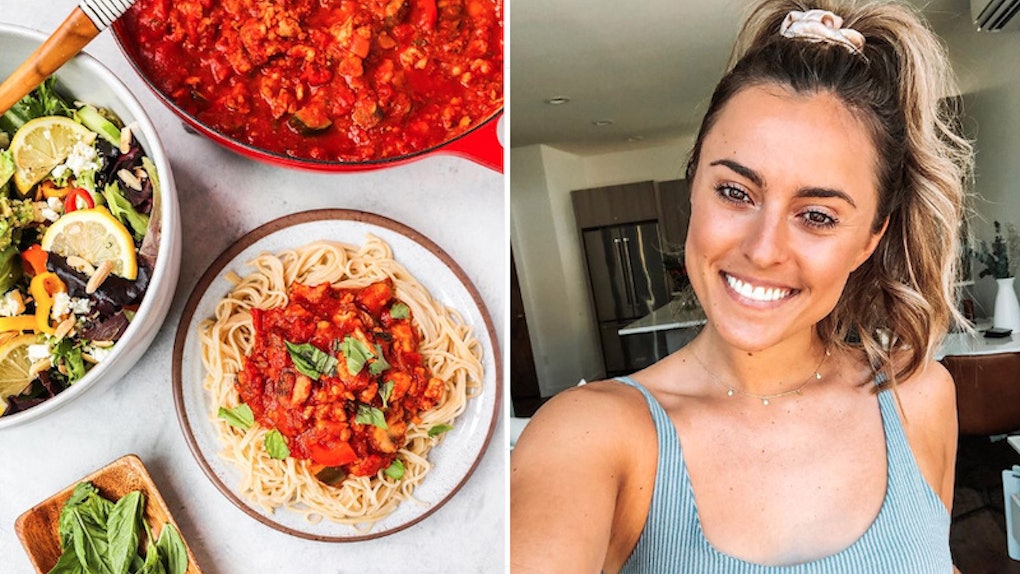 Almost anyone who cooks at home occasionally snaps photos of their meals. Who doesn't love posting a pic of that steamy plate of lasagna you whipped up all by yourself, so your friends can shower you with likes? Rachael DeVaux, the dietician, trainer, and entrepreneur behind the Rachael’s Good Eats Instagram account, has built a brand solely based on sharing photos and videos of new versions of your favorite meals. So, what's it like to run a foodie IG account with over 400,000 followers? Well, DeVaux didn't plan on reaching almost half a million people at the outset.

“I meant [for Rachael's Good Eats] to just be for my friends and family to show them that eating healthy could be fun, simple, and could take just a few ingredients,” shares DeVaux.

The Seattle, Washington-based health guru was a dedicated high school athlete who was fascinated by nutrition. She went on to study it at Oregon State University, and she graduated with a dietetics degree in 2015, which is when she decided to start the Rachael’s Good Eats IG account, to teach her friends about how they could make their favorite comfort foods with extra nutritious ingredients.

“From day one, I’ve always shared all of the instructions and ingredients in the caption of the photo, which is partly why I gained so much traction in the beginning," she says.

A few months after officially become a registered dietician (RD), DeVaux also earned a certification in personal training — she feels that a balanced lifestyle largely incorporates both fitness and food. She opened her own private practice in 2017. While she was working with a handful of clients, she was still maintaining her Instagram account.

I just wanted to focus on social media, especially because I could reach thousands more people this way and help so many more people than I would with a private practice.

DeVaux started her Rachael's Good Eats website in 2016, because she needed a place where fans could more easily find her recipes without having to scroll all the way through her Instagram account.

One of the very first posts she remembers going viral was her now-famous Cookie Skillet recipe back in the spring of 2017.

“I saw it all over Instagram and I thought it was the craziest thing,” says DeVaux. “I was shocked that it was suddenly in the hands of so many people, and it was all because I was showing people that a dessert or treat could still taste so good and be healthy for you.”

With sharing her recipes, workouts, and beauty tips, DeVaux’s website and Instagram account starting seriously taking off. So, she ultimately decided to make social media her full-time gig six months after opening the private practice, in 2017. At the time, Instagram ads and sponsorships with like-minded companies were paying the bills, and there were many more paid opportunities to come.

At first, DeVaux’s friends and family poked fun at her for constantly taking photos of her food and recording her workouts. However, she gratefully notes they were fully supportive of her career transition through it all.

DeVaux also praises the wellness community she’s accumulated online. One of her absolute favorite parts of her job is the fact that she has made friends all over the world, and they’re bonded by an appreciation for health and wellness.

“It’s definitely opened doors to people I would have not met before. I have friends all over the world, which is crazy, a lot on the East Coast and in LA,” DeVaux says. “It’s cool to have friends where you can get along on the same level and you met on Instagram. [Meeting on social media is] pretty normal these days, but wellness is kind of something you can relate to each other about.”

Compared to other social media stars, DeVaux runs her account in a somewhat unconventional manner. She posts as she goes instead of scheduling her Instagram posts.

DeVaux says posting as she cooks and eats makes her account feel far more genuine, as opposed to scheduling her posts days — or even weeks — beforehand.

“I don’t do scheduling in advance — I know a lot of bloggers do that. But I like taking it day by day and actually posting in the moment,” she explains. “I think it’s definitely more realistic for people, and for me, honestly. It’s pretty organic if I think, 'What am I going to make for dinner tonight?’ I feel like my feed is pretty realistic.”

DeVaux also keeps it real by engaging with her followers. She says interacting with fans and acting as a real-life resource for them has grown her following tremendously.

“I think [an important part of going viral] is interacting with your audience and being engaging and starting conversations, and being a resource for them. You want to show that you are a person on the other side. I try to message and DM back as many people as I can throughout the day. That definitely will help grow your following, I think.”

And like anyone with a creative career, DeVaux occasionally feels like she’s losing steam on the job. Constantly running to the grocery store (up to five times a week!), coming up with recipe ideas, and posting to social media can become incredibly tiresome. But, she says she stays motivated in a few different ways.

“If I’m ever feeling sick of social media I can learn to just live my life without my phone for a couple of days, which I’ve gotten a lot better at, says DeVaux. “I also think traveling, going out to eat at different restaurants, and getting out of the house has a huge affect on staying inspired.”

She also gains inspiration from other wellness Instagram accounts that she finds uplifting, such as fitness gurus like Kelsey Wells and Krissy Cela.

“I just like following people who inspire me and have me feeling good leaving their page,” she says. “[With some accounts], you just scroll through [their] photos and captions you’ll be inspired for sure.”

Sometimes, DeVaux encounters haters (don’t we all?), but in the end, she reminds fans that they just can’t please everyone.

“Its not common to get something negative, but when I have, it’s definitely just given me tougher skin,” she says. “But I know everyone’s gonna have something to say and you can’t please everyone.”

I love it. I value the chance to connect with so many people, and being able to work on what I’m passionate about in life.

And through it all, she still shows a tremendous amount of enthusiasm for her work. She’s constantly coming up with low-sugar comfort food recipes with fewer (and more wholesome) ingredients.

“I love recreating people’s favorite classic treats especially, like my cookie skillet, I just made Nutter Butters… OMG, they’re unreal. They’re only five ingredients, they’re the best,” DeVaux raves. “And Twix bars! I love surprising people with healthier alternatives and showing them that it can be made more nutritious with much fewer ingredients, and that they can taste better than the original. It opens their eyes to healthy eating and that you don’t have to deprive yourself of what you love.”

Over the years, DeVaux has accumulated quite a wide range of followers. Although most of them are women (about 87%, she says), many of them are students in college, and a lot of them are middle-aged. But, each of her followers has one thing in common: they’re interested in convenience, eating well, and living well.

Despite the fact that DeVaux didn’t start posting about fitness and workout routines until a bit later in her social media career, it seems as though she’s been working on it a lot lately… especially with easy-to-do workouts that don’t require too much time or money.

“I’ve shown quite a bit [of exercise content] on my page in the last year — I came out with my 10-week training guide called Good Sweat at the beginning of 2019, and that’s been really popular,” she says. “My number one goal is to make it convenient and accessible for everyone ... so you can buy each week or you can [buy] the whole program. You could just buy one week and repeat the exercises as many times as you want, before you move on to the next week.”

Clearly, DeVaux loves what she does, and wouldn't trade in her career for anything else. “I love it," she says. "I value the chance to connect with so many people, and being able to work on what I’m passionate about in life."