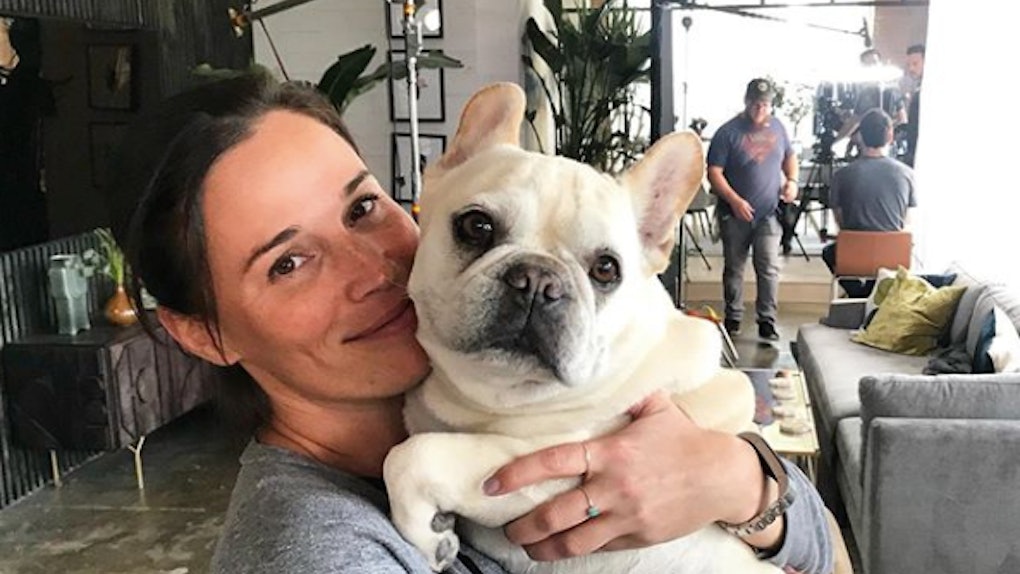 'Queer Eye's Bruley The French Bulldog Might Be Gone, But His Legacy Lives On

Even for entertainment industry professional Michelle Silva, who manages the Instagram account for Bruley the French Bulldog from Queer Eye, fame was never a thought when she started the viral account in November 2018. Nonetheless, she and Bruley racked up over 293,000 followers in less than a year, making 10-year-old Bruley a sensation, as evidenced by all the kind words and support that came pouring in from fans after the news of Bruley's death broke on Friday, Oct. 4, 2019.

At the age of 10, Bruley passed away in the arms of Silva on her bedroom floor in Los Angeles on Sept. 28. According to an Instagram post on Bruley's account, Bruley had been suffering from heart problems and risked a potential heart attack. Silva wrote in the post, "He just had too much love and heart for his physical body. It all happened so fast, but I held him as he took his last breath, and I was able to tell him I loved him the very most." In the heartfelt message, Silva went on to share the sweet moments she had with Bruley ever since she took him home at 9 weeks old.

I thought it was going to be a cute thing that my dog was making a cameo in the show and all of a sudden it became this sensation.

Elite Daily spoke with Silva about Bruley and their rise to Instagram stardom prior to Bruley's passing. Silva lovingly shares how the ordinary pooch went from a Queer Eye star to Instagram sensation, and it all started when Silva, a freelance television producer, was asked to join the team at Queer Eye. The opportunity required her to spend five to six months in Kansas City, and she agreed to it — with the condition that she’d be able to bring her beloved French Bulldog, Bruley. Thankfully, they said yes, marking the beginning of an adventure for both dog and owner on the set of Queer Eye. Though Bruley was originally brought to accompany Silva, his fun and quirky personality quickly made a mark on the producers, landing him a spot in the show. "He would wander in and out of the loft, and Jenn Lane, our executive producer, basically said, 'I think I’m gonna put him in the show,' and that’s how it happened" Silva shares. "I thought it was going to be a cute thing that my dog was making a cameo in the show and all of a sudden it became this sensation."

So, how did Silva conceive of the brilliant idea to share Bruley's moments on social media? Silva recalls it was Karamo Brown who first thought of the idea of creating an Instagram for Bruley during filming. Giving it a shot, Silva created the page, which only had a small following in the beginning. However, just like Bruley's immediate impression on the Queer Eye staff, Bruley became an instant hit after Season 3 premiered on March 15, 2019, and viewers got a glimpse of the joyous pooch. “I remember that first weekend, it was like, 'Oh that’s cool, there’s 5,000; 6,000 followers, and I remember one of my best friends said, 'Wouldn’t it be funny if it was over 20,000 by the end of the weekend?' And I think by the end of the first weekend it was like 50,000," Silva explains.

The instant popularity of the account propelled Silva into a world where she had to quickly learn about managing a thriving social media account. Silva explains, "I didn’t wake up and say, 'I want my dog to have an Instagram and be a celebrity,' so there was a lot of learning to do." In the beginning, she received help from friend and brand manager Lauren Walsh Branding to help her learn the ropes. "I started with her just to help me get off the ground. I didn’t know what analytics were, I didn’t know what insights were. I think so many of us, getting a viral Instagram account can be very intimidating, even now, sometimes I scroll through the bigger account and I’m like, 'Oh man, how do you manage that, how do you get that?' It feels like people are already established," Silva shares.

There is so much Bru inspired, and it’s so much bigger than I even realized.

With that, Silva keeps the process simple, opting to focus on candid moments and authenticity rather than extensive planning. Before Bruley's passing, Silva shared, "I don’t plan out my posts weeks in advance, I don’t use any software … mostly it's just me spending time with my dog and when he does something funny, I snap a photo." Even with Bruley gone now, Silva plans to keep the account going in his honor. She still aims for a picture a day and enjoys posting outtakes from their past photo shoots to highlight the fact that "it’s reality." Silva believes that the secret ingredient to crafting a successful Instagram post is truly knowing your dog’s personality, spirit, and even what your dog would be saying if he could have his own caption.

Approaching social media with authenticity has paid off, with Bruley’s Instagram steadily growing ever since it was created last November. With the popularity has come plenty of positive reactions to the account. Silva’s personal favorite is the fan art she gets. She's also received many free products from companies to sample, such as dog harnesses and dog leashes. Each product was personally tested by Bruley to see if he liked it. If he did, they'd reach back out to the company to set up a partnership or affiliates program. "We get a lot of start-ups reaching out; it’s awesome. I always support that, I like the idea of supporting small businesses," Silva shares. Even with the partnerships offers, Silva strives to ensure that the content still keeps it real at the end of the day: "I didn’t start this to be about revenue. I think we’re all kind of now inundated with ads and swipe ups and affiliate links… I try to keep it genuine. But it’s fun when we get a big deal, I’m not gonna lie."

Bruley's Instagram page has become so successful that Silva and her boyfriend, Daniel Hopps, who helps run it, recently decided to scale back their own day jobs working as television producers and work full time on Bruley’s page. They’re rolling out their own merchandise soon on the line's website, which will have both human and dog merchandise, and are looking into different collaborations with already established companies. They made the decision to put more hours into the page while Bruley was still alive, but they still plan to go forward with running the page, because as Silva writes in her post remembering the pooch, "There is so much Bru inspired, and it’s so much bigger than I even realized."

So, that’s what we hope with Bruley’s page. Whatever you’re gonna do with your day, here’s this funny, sleepy old French bulldog that’s hopefully gonna make you smile.

With Bruley's passing, Silva still plans to continue posting pictures of her beloved dog. She's also gotten involved with fostering through Road Dogs and Rescue, a non-profit in Los Angeles. Her first foster dog is an English Bulldog named Morton, who she describes as "hilarious" and "the first official member of the Foster Bru Crew." Following in Bruley's footsteps, Silva hopes to find a way to feature more of these amazing dogs on Instagram. With big plans ahead, Silva takes the time to reflect on the importance of sticking to the value of authenticity, which to her is what this is still all about. "At the end of the day, people can take Instagram very seriously, but it really is just something fun. It should be something that we’re scrolling through and we’re smiling when we see the pictures and not beating [ourselves] up if we’re not looking like that account, or if we don’t have that many followers," she says.

Though Bruley is gone now, his adorable quirks and downright cuddly face will undoubtedly continue to brighten fans' lives, which is exactly what Silva hopes the account will keep on doing, as she told Elite Daily, "That’s what we hope with Bruley’s page. Whatever you’re gonna do with your day, here’s this funny, sleepy old French bulldog that’s hopefully gonna make you smile."