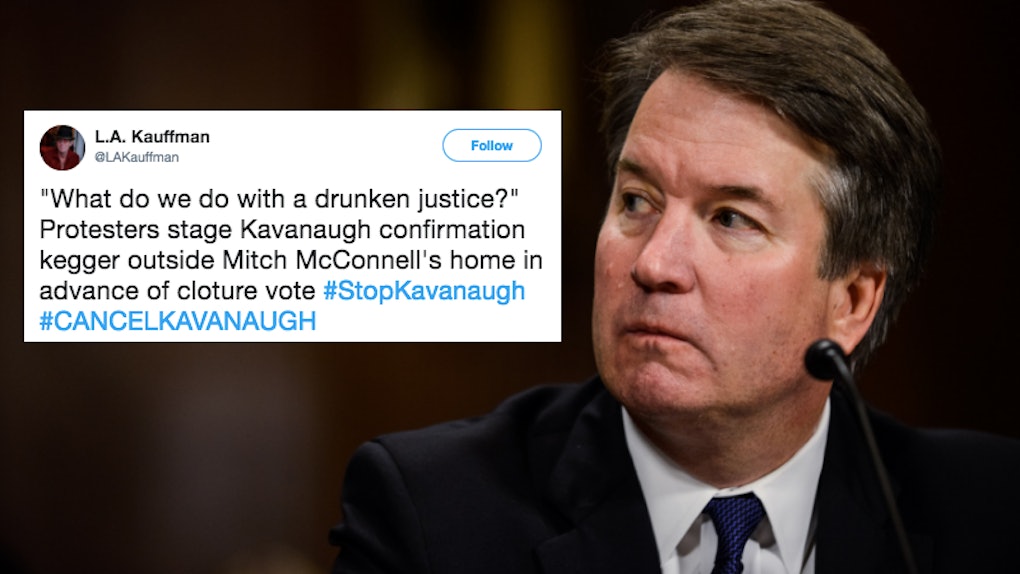 The testimony of Dr. Christine Blasey Ford and U.S. Supreme Court nominee Brett Kavanaugh on Thursday, Sept. 27, has dominated headlines across the country — and divided the nation on whether or not Kavanaugh should be confirmed for a seat on the U.S. Supreme Court. On the morning of Friday, Oct. 5, the day that the Senate's procedural vote on Kavanaugh took place, protesters were taking a more creative approach in their "#StopKavanaugh" efforts. In Washington D.C., protesters were drinking beer outside Mitch McConnell's house to denounce the Kavanaugh vote in a viral video posted to Twitter.

There's a lot to unpack from the Ford and Kavanaugh showdown that took place on Capitol Hill on Thursday, Sept. 27. In case you've been living under a rock, here's the quick rundown of what's going on. Following Kavanaugh's Supreme Court nomination from President Donald Trump, Ford brought about allegations that Kavanaugh sexually assaulted her at a high school party sometime in the 1980s. Kavanaugh denied her allegation and called it "completely false." Elite Daily reached out to Kavanaugh's representatives for further comment but didn't hear back.

If you watched their words unfold on live television, there are likely several tidbits from the testimony that likely stuck with you. For example, Kavanaugh's declaration over his love of beer stuck out to me, and it's been a hot topic of discussion in the press. “I drank beer with my friends,” Kavanaugh said to senators in his opening statement, as reported by the Washington Post. “Almost everyone did. Sometimes I had too many beers. Sometimes others did. I liked beer. I still like beer.”

Playing on that, protesters marched to Senate Majority Leader Mitch McConnell's house in Washington D.C. on Friday morning, and staged a quasi-frat party with beer cans and signs, per a tweet from the ABC News Twitter account on Oct. 5.

That's what makes this protest so prolific. Instead of marching or holding up signs, these protesters got creative with their approach to stop Senate Republicans from confirming Kavanaugh's Supreme Court nomination. In a video posted to Twitter by activist L.A. Kauffman, protesters can be seen holding cases of beer and are heard chanting, "What do we do with a drunken justice?" Just like at a college frat party, protesters are seen holding up cans of PBR in the air and chanting "Chug, chug, chug" outside of McConnell's D.C. residence, according to the video.

Needless to say, people were very much here for this creative twist on a protest.

There's nothing wrong with enjoying a few brewskis in a responsible manner (if you're 21 years and older), IMO. I've certainly been known to knock back a brew or two in my lifetime. That said, there's a fine line between having a few beers over the span of a couple of hours and blacking out because you've had too much. And that exact scenario is at the center of the Ford's claims against Kavanaugh.

Ford's allegations against Kavanaugh suggest that he was belligerent drunk during the reported sexual assault incident. It's a claim that Kavanaugh vehemently refutes. During the testimony on Capitol Hill, Kavanaugh told the Senate Judiciary Committee that he has never blacked out from drinking alcohol. "But I did not drink beer to the point of blacking out, and I never sexually assaulted anyone," Kavanaugh said at the Sept. 27 hearing, according to VICE News.

Protesters focused more on Kavanaugh's declarations of liking beer in high school, though.

These tweets about the beer protest to stop the Senate from confirming Kavanaugh show that people clearly think this is one of the most ingenious protest approaches yet. TBH, I'm inclined to agree with them.

The Senate Judiciary Committee still voted 11-10 to push Kavanaugh's confirmation through to the Senate floor on Friday, Sept. 28, pending the results of an FBI investigation which wrapped up just days ago. Per NPR, members of the Senate voted to advance Kavanaugh's nomination on Friday, Oct. 5, and there's expected to be a final confirmation vote this coming weekend. But there is no word yet on whether or not there will be an encore beer-centric protest, so stay tuned.