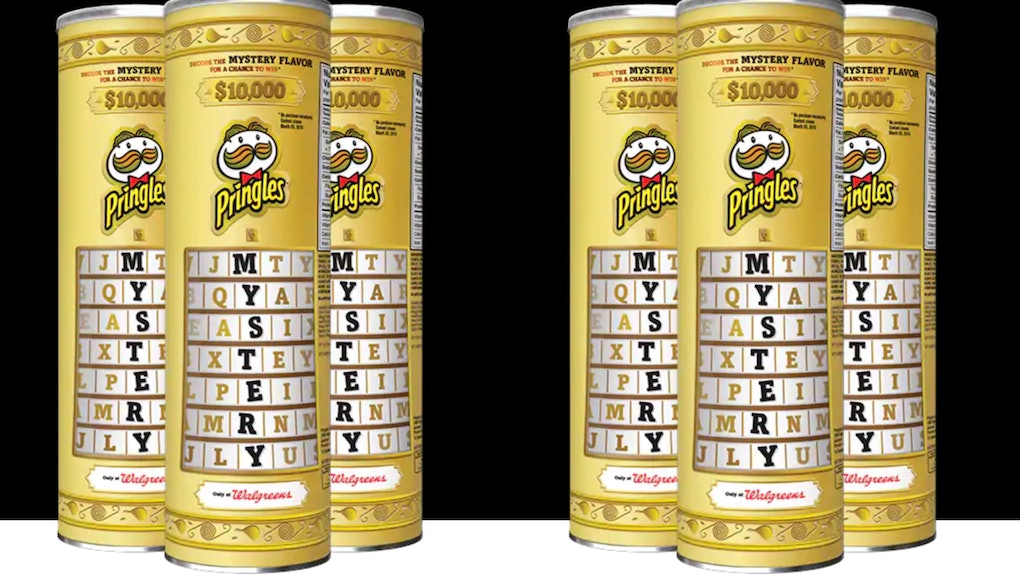 Pringles' New Mystery Flavor Contest Could Score You $10K, So Get Your Taste Buds Ready

If you have an extremely well developed and refined palate, you've got an advantage in a brand-new contest that requires people to use their mouth and knowledge of flavor. One of Kellogg's fan-favorite chip brands, Pringles, will be releasing a new mystery flavor in the United States, and if you guess the flavor correctly you could win some serious cash. Pringles' new mystery flavor could score you $10,000, so get your taste buds ready, folks!

A new mystery Pringles flavor will be available exclusively at Walgreens between May 1, 2019 and July 30, 2019. During this time period, Pringles enthusiasts and flavor detectives have a chance to "decode" the mystery Pringles flavor for a shot at $10,000, which they can win if they guess the flavor correctly. There are two ways to enter the contest, a purchase option and a non-purchase option. The purchase option requires Pringles fans to buy a 5.5 ounce container of mystery flavors Pringles from Walgreens, take a picture of the receipt, and submit a flavor guess directly on the Kellogg's website.

The non-purchase option requires that contest participants send in a notecard with various pieces of information, including a suggestion for what they'd like to see as a future mystery flavor. You can find all the details for both the purchase and the non-purchase options on the official contest rules.

The contest is open to all participants 18 and older living in the United States. The winner will be announced on or around August 15.

According to Delish, this is the first time Pringles has released a mystery flavor in the United States. Currently, there's also a mystery flavor contest running in Australia until the end of May where winners can also win $10,000, but the big difference is that the Australian contest has a bunch of video clues attached to it that fans can use to guide their guesses. The first video suggests people look right on the can for the clue; the second one shows a cow walking backward on a treadmill; the third asks fans to un-jumble some letters for a "cryptic clue"; the fourth lists several ingredients like "flour," "onion powder," and "chili powder"; the fifth shows images of a bunch of random, unrelated objects like a chair, a donut, and a snowman; and the sixth shows a person whose audio has been jumbled up talking about the flavor. Honestly, those clues have left me utterly confused.

While the Australian contest is different from the American one, it can't hurt to know the clues in case there's a little (or a lot) of overlap between the two flavors. While regular Pringles flavors include classic faves like BBQ, cheddar cheese, salt and vinegar, and pizza, past limited-time Pringles flavors have included Chicken Taco, Cheeseburger, and Thanksgiving Dinner, so you might have to get creative with your guesses.

I, for one, can't wait to get my hands a container of mystery Pringles to try out. Snacks, a chance at $10,000, and a guessing game? What's not to love about that?