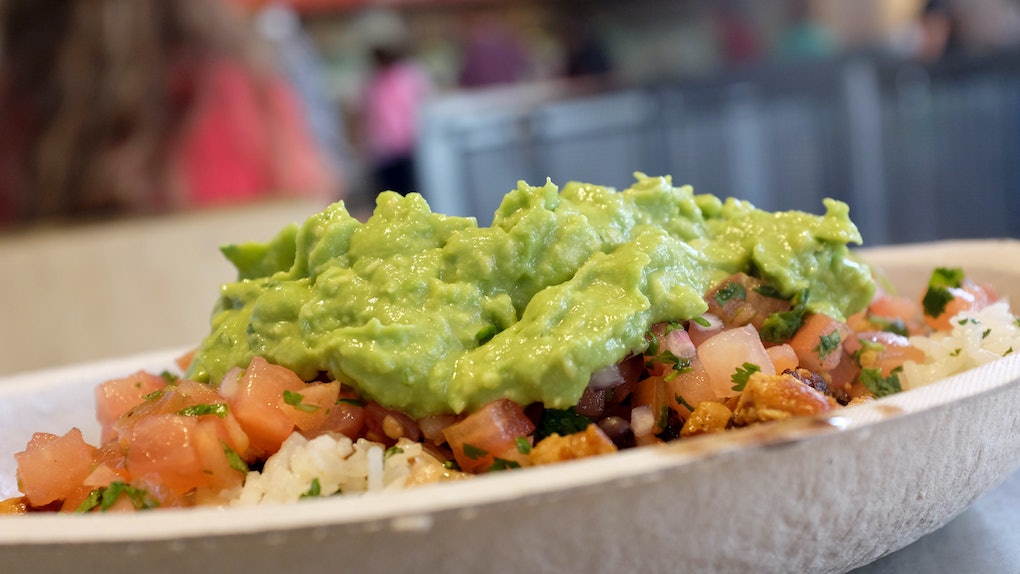 IMHO, there's nothing like free food to keep the Monday scaries at bay, which is why you definitely won't want to sleep on Postmates' latest promotion perfect for avocado fans. Your week is definitely about to look up, thanks to Postmates' free Chipotle chips and guacamole giveaway which kicks off on Oct. 21. Here's how to get in on this sweet deal if you're looking to spice up your burrito bowl or tacos without paying extra for guac.

According to press materials, you can start your week on a tasty note and score some freebies by heading to your Postmates app for some Chipotle delivery. With the start of NBA season and the World Series just around the corner, Postmates and Chipotle are teaming up to bring you more of the guac-ing goodness you know and love from the Tex Mex chain without requiring you to turn off your TV. The giveaway, which runs from Monday, Oct. 21 through Thursday, Oct. 24, apparently includes $1 million worth of chips and guacamole completely on the house, and the best part is that you don't have to leave your couch and/or put on clothes to partake. All you have to do is head to the Chipotle option in your Postmates app, put at least $15 worth of burritos, tacos, or whatever else you might be craving in your cart, and use the promotion code "DIPTHECHIP" while you're checking out. You'll get your Chipotle noms and a free order of guac that you can pair with some accompanying chips, spread over your burrito bowl, or eat by the spoonful. The world is your oyster (or rather, avocado). Keep in mind there is a limit of one code use per customer.

While this promo is only going on until Thursday, Oct. 24, I'd make sure to make Chipotle a part of your Halloween plans if you're looking to get in on the chain's annual Boo-rito deal. As a refresher, you'll want to head to your closest storefront dressed in costume on the spookiest night of the year to score your choice of burrito, burrito bowl, salad, or an order of tacos for just $4, per a Chipotle rep. While the company unfortunately isn't offering an online delivery promo this year, I personally think it's well worth grabbing your costume and making the trek if you want to fuel up on your favorite Chipotle entree on the cheap.

In other words, Chipotle is making the rest of October a lot tastier and cost-effective, so I'd make sure to cancel your lunch and dinner plans for the next few days and mark down both deals on your calendar.

While $1 million worth of chips and guacamole initially sounds like a whole lot of the crave-worthy pairing, I'd keep in mind that this free Chipotle chips and guacamole promotion is going on nationwide. In other words, I wouldn't sleep on the order and I'd recommend putting in your Postmates order sooner rather than later to make sure that they don't run out by Thursday. Here's to starting the week off on the guac-ing best foot possible.