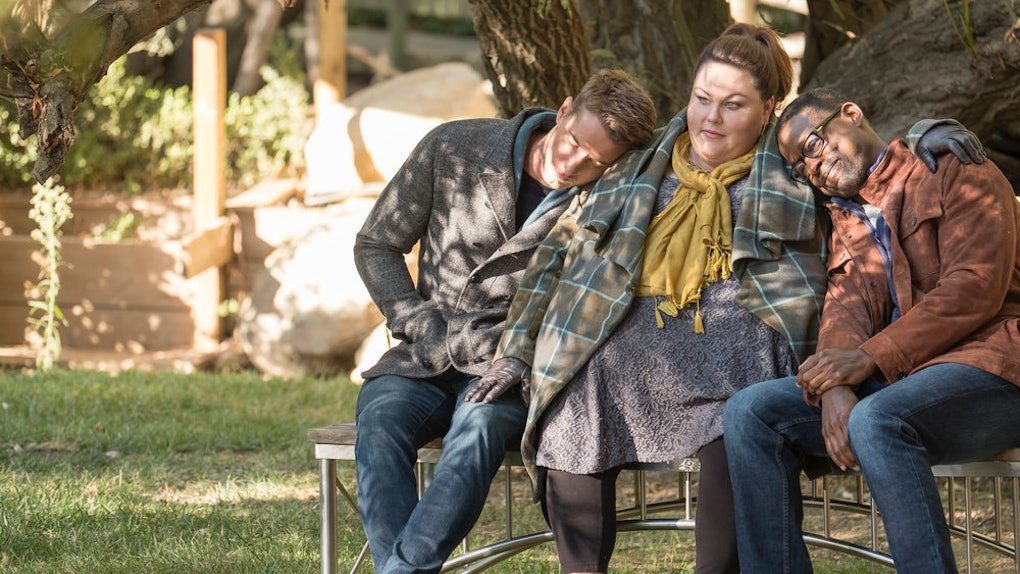 The This Is Us midseason finale aired just over a month ago, so why does it feel like it's been ages since we've seen the Pearson fam? Don't fret — if you've been missing the Big Three like we have, take comfort in the fact that the second half of the hit show's second season will air on Jan. 9, 2018. And the photos of This Is Us' Season 2 midseason premiere are already getting us excited for what's to come, while raising questions regarding the fate of one of America's favorite TV families.

The first half of Season 2 ended with three pivotal episodes surrounding the Pearson kids — Kevin, Kate, and Randall. Kevin's gut-wrenching installment showed him hitting what seems to be rock bottom for him and the painkiller addiction he's been struggling with. He ended up stealing a prescription pad from a one-night stand after getting wasted at his high school alumni event and lamenting his past mistakes on the football field through a heartbreaking monologue. Kate's episode continued the show's tradition of making the audience cry by focusing on the aftermath of her miscarriage. Randall's wasn't exactly a barrel of laughs either — he and his family had to say goodbye to his foster child, Deja. Thanks to all that, we were pretty much wrecked just in time for the holiday season.

Things really came to a dramatic head when the midseason finale culminated in a drunken Kev taking off in a car with his niece Tess in the backseat. There are no injuries as a result, but now Kevin "Number 1" Pearson will have to deal with a DUI arrest, the reality of his addiction, and presumably Randall's parental wrath...

Episode 211, "The Fifth Wheel," looks like it will involve a summertime retreat for the 1990s Pearsons. It seems like young Kate will get some bonding time with her dad in the great outdoors.

The adult Big Three appear to be sharing a moment in the present day, hugging on a park bench. Could it be the same park they visited in the flashbacks from the very same episode? We wouldn't put it past the show, considering it doesn't tend to shy away from the overtly sentimental.

"The Pearsons come together under unexpected circumstances; Jack surprises the family with a summer vacation," is the synopsis for the upcoming midseason premiere.

We're thinking things look pretty peachy in many of the photos from this particular episode, though we have to imagine heavy moments are on the horizon. That includes a 12-minute scene that will probably require a box of tissues. Or four.

“They just go at it in an interesting way that I had to call of them into my office because there’s some really serious acting going on,” creator Dan Fogelman teased to Deadline. “We find Kevin in rehab, and the family has arrived to hash things out in a therapy session. It’s very loaded.”

Executive Producer Isaac Aptaker spoke to The Hollywood Reporter about what to expect moving forward in Season 2, revealing,

[We] come back in and deal with the thought of that arrest and what it does to the family. All of our present-day cast are playing in the same story and do a really, really cool special episode where they really get into some of their family dynamics and get to play off each other. It was very exciting to watch. That's always fun for us, because it's such a big cast and everyone is so, so strong, acting-wise, that whenever we can pair people together who haven't gotten to do a story together, it's just so much fun.

No matter what lies ahead, we can safely assume the emotional rollercoaster isn't slowing down. As the wise Randall once said, "Life feels like Pac-Man sometimes, I guess. It's the same game all over again. Same board. Same ghosts. Sometimes, you get a bunch of cherries but eventually and inevitably, those ghosts catch up with you."