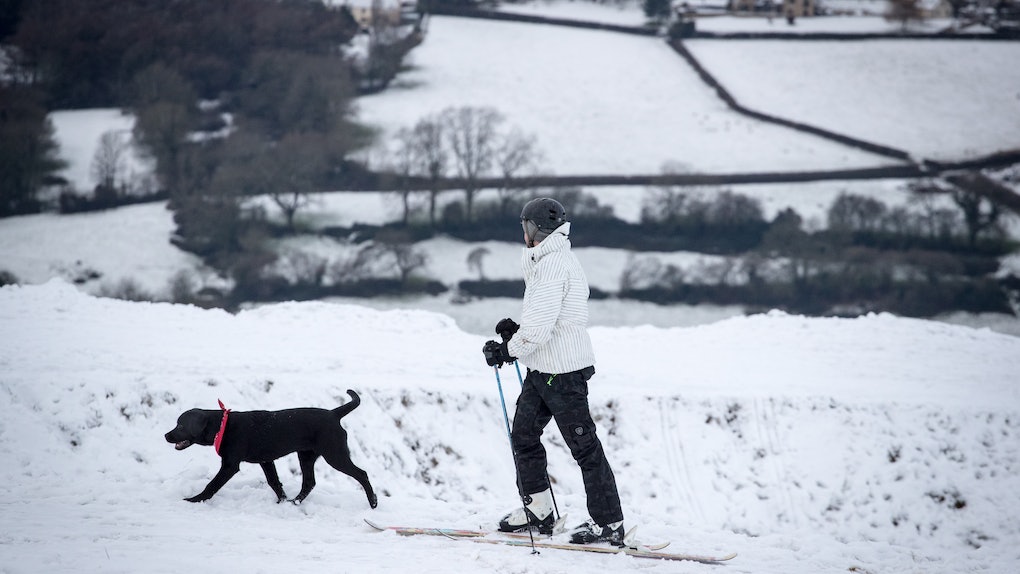 Photos Of Snow In Erie, Pennsylvania Look Apocalyptic & You Need To See Them

Most of us dream of a white Christmas — and so was Erie, Pennsylvania, before they were hit with almost 63 inches of snow in the three days since Christmas Eve. Whether 5 feet of snow sounds like a dream to you — or if it sounds like an absolute dreaded nightmare — the entire city of Erie is pretty much totally buried right now. Between images of cars completely engulfed in snow, and almost-totally buried people attempting to shovel their sidewalks, the photos of snow in Erie, Pennsylvania look desolate — and honestly, a little apocalyptic.

With Erie completely covered in 5 feet of snow, the visibility is terrible, and those willing to trek through are basically submerged. Erie's over-the-top winter wonderland looks like a hybrid between Stanley Kubrick's The Shining, and Josh Peck's greatest comedy, Snow Day... and residents are documenting the heck out of it.

In many photos and videos, Erie looks like an actual horror movie. Nobody is outside, and there isn't house or car in sight. We're pretty convinced that snow is just taking over the world as we know it, one city at a time.

I mean, just look at the cars under all of that freaking snow. Most of them are literally not visible. Even a giant vehicle doesn't stand a chance against this crazy snow storm, and Erie is looking freaking lonely RN.

While being completely and utterly surrounded by snow, some people might be feeling on the brink of cabin fever, so leaving the house could be mandatory. But there's no denying that these Erie residents have decided to take on the snow at a whole new level... so at least they're making the best of snow-pocalypse. Would you do it?

Although Erie is looking like a (barren AF) snow globe, local canines are actually enjoying the snow tremendously. Whether they're large enough to frolic, or if they need a little bit of help from their human, being surrounded by fluffy white snow is quite literally the dream for them. So this is really what's important to keep up with in Erie, at this moment in time.

According to CNN, Erie got the most amount of snow on Christmas day, more than any other day, with a ridiculous 34in. of snow. It broke the record for the most snowfall on Christmas, and the most snow falling in one day. Totaling more than four times their previous snowfall record on Christmas of 8.1in., Erie continued to receive another 24.5in. on Dec. 26, totaling 58.5 in. As of Dec. 27, there is 62.9in. of snow in Erie, according to National Weather Service Cleveland, and many people are basically stuck in their homes. Erie police warned residents on Facebook not to drive because of the crazy AF weather:

"Roads are dangerous and impassable. This is an incredible amount of snow that we're trying to move and we appreciate resident cooperation. Residents should stay off of City of Erie streets until it stops snowing, and we can get the roads open.

Before police sent out a warning, however, residents were bravely trekking through get to their families on Christmas Eve. So if you were wondering what it looks like to drive through that caliber of a snow storm, look no further... I don't know about you, but driving through this is my literal nightmare.

Yikes. So whether you're keeping up with Erie's snow-pocalypse as a (really cold) resident, or if you're merely watching it as a warm and snowless bystander down South, the photos of Erie during this storm are really crazy. Locals, however, seem to be having fun with it, and luckily, they're maintaining a good sense of humor. So stay safe, Erie and good luck digging yourselves out!