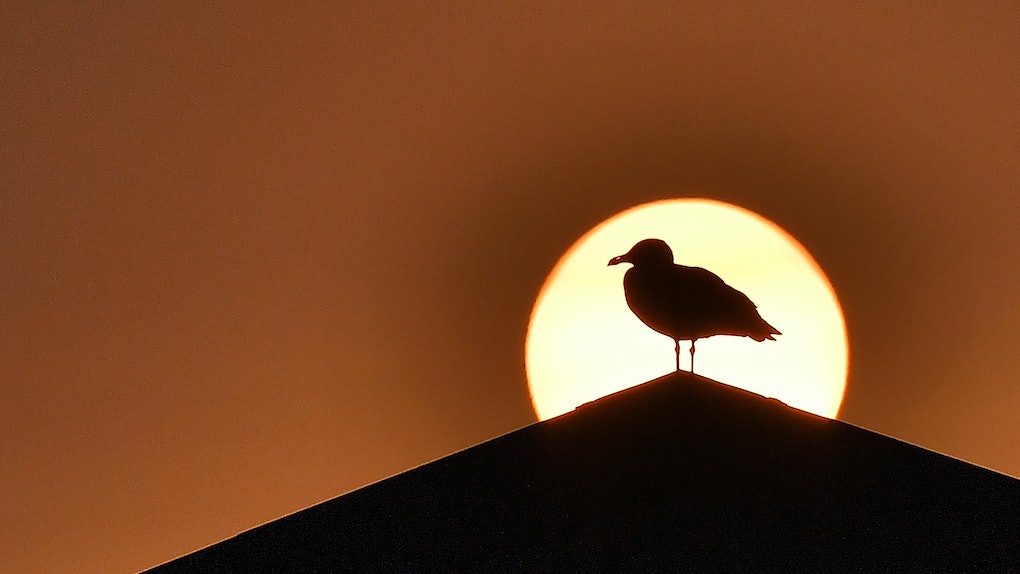 There's something serious spooky happening over in the U.K. right now. In a Halloween-like twist, Hurricane Ophelia has managed the turn the sky a bizarre, red hue. Photos of Hurricane Ophelia's red sky circulated throughout social media on Oct. 16 — and Twitter is very, very shook.

A storm slammed down in Ireland over the weekend, packing torrential rain, powerful winds, and gusts reaching 90 mph, according to Slate. About 120,000 buildings were left without power, and as of Oct. 16, three people have been killed.

The effects of the hurricane stretched over to England, where residents were startled to discover an eerie, red glow hovering over the city.

"It's certainly spectacular at the moment and quite a talking point, we've had a lot of calls about it," Met Office forecaster Grahame Madge told The Telegraph. According to Madge, the phenomenon has everything to do with Ophelia. He explained,

It's all connected with Ophelia, on the eastern side of the low pressure system air is coming up in the southern direction. Air is being pulled from southern Europe and Africa and that air contains a lot of dust.

He added that Ophelia is "drawing air" from the Sahara, and smoke particles from wildfires in Spain and Portugal. Those particles help scatter the sunlight.

England residents were having mixed feelings about this sudden, spooky sky change, and took to social media to share a whole slew of surreal photos.

Some were a little creeped out.

Others were delighted that they didn't have to use a filter.

Some straight up felt like the apocalypse had hit.

And many, many people were absolutely loving it.

The red sky is expected to last through Oct. 17, when Ophelia heads across Scotland, and moves towards Scandinavia, according to Madge. The phenomenon actually happens once or twice a year in the U.K., he added, though typically during the night time.

Before you start planning on building an apocalypse shelter (you know, just in case), there's pretty much a step-by-step guide for how this whole phenomenon went down. BBC weather presenter Simon King told The Telegraph,

Ophelia originated in the Azores where it was a hurricane and as it tracked its way northwards it dragged in tropical air from the Sahara.

Because the dust is so high, light from the sun is scattered in the longer wavelengths, which is more the red part of the spectrum, so it appears red to our eyes.

The power is out for many residents because, according to the country's power system operator ESB Networks, "fallen trees on overhead lines are responsible for most of the damage to the network."

Schools in Northern Ireland were closed on Oct. 16 and Oct. 17 due to the "the prolonged nature and potential severity of the storm," Department of Education wrote on their website.

Casualties of the storm have been almost exclusively caused by the results of fallen trees. NPR reported that one woman died after a tree fell on a car she was in. And, according to the BBC, a man died after his car was struck by a tree and another man was killed "in a chainsaw accident in [County] Tipperary while attempting to remove a tree downed by the storm."

Stay safe out there, Ireland!