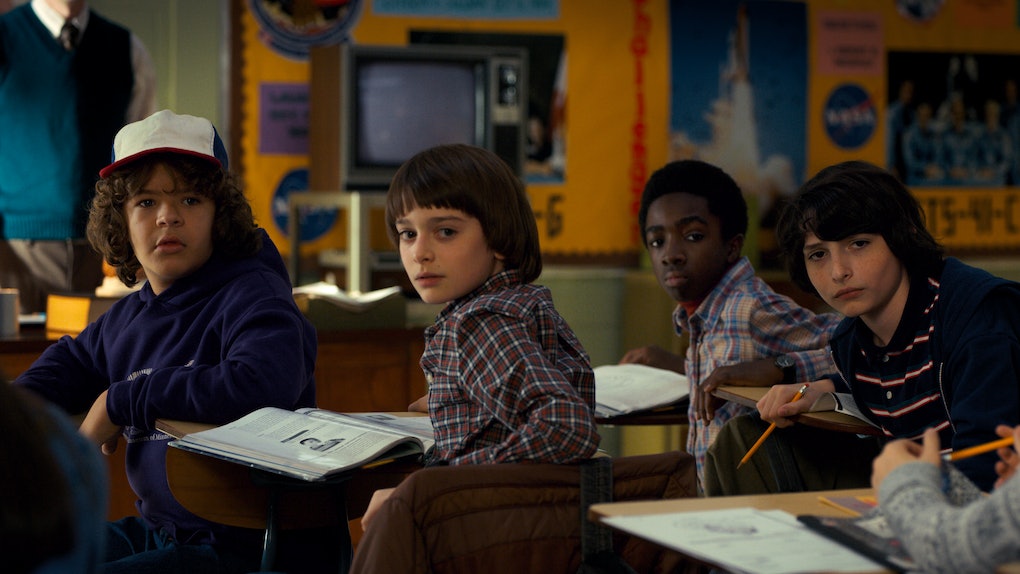 At the end of Stranger Things Season 2 episode 2, the mysterious noise in the trashcan outside Dustin's house wasn't revealed to be some kind of murderous creature, along the lines of a Thesselhydra. Instead, it was the world's oddest looking amphibian, a cross between a slug, a frog and, well, something just a touch slimmer, which was perfect since Dustin decided to transport it around in his Ghostbusting trap. However, his new friend also made him late for class, missing a history lecture about something just as creepy: Phineas Gage. But who was Phineas Gage? And why did Mr. Clarke choose this week to do a lecture on him? Please be aware: This post contains spoilers for Stranger Things Season 2.

Though the story Mr. Clarke tells the class (before Dustin so rudely interrupted with his late arrival) sounds like some sort of creepy science fiction, it's not. Like last season's grounding of Eleven's origin story in the MKUltra project, which was a real program the CIA ran in the 1950-1970s, Mr. Clarke's lesson on the day that Dustin brings a fantastic creature to school is based on a true set of events, one I actually remember learning about in school myself. (Though I didn't learn it in middle school, I learned about it high school psychology.)

Phineas Gage was born in the 1820s, and lived until 1860, passing away in his late 30s. Like most men of the time period who spent their lives building the great American railroad, his live might not have been one most remembered, except for a stunning accident that happened to him in 1848, when he was about 25 years old or so.

According to the Smithsonian,

In 1848, Gage, 25, was the foreman of a crew cutting a railroad bed in Cavendish, Vermont. On September 13, as he was using a tamping iron to pack explosive powder into a hole, the powder detonated. The tamping iron — 43 inches long, 1.25 inches in diameter and weighing 13.25 pounds — shot skyward, penetrated Gage’s left cheek, ripped into his brain and exited through his skull, landing several dozen feet away. Though blinded in his left eye, he might not even have lost consciousness, and he remained savvy enough to tell a doctor that day, 'Here is business enough for you.'

Gage’s initial survival would have ensured him a measure of celebrity, but his name was etched into history by observations made by John Martyn Harlow, the doctor who treated him for a few months afterward. Gage’s friends found him 'no longer Gage,' Harlow wrote. The balance between his 'intellectual faculties and animal propensities' seemed gone. He could not stick to plans, uttered 'the grossest profanity' and showed 'little deference for his fellows.' The railroad-construction company that employed him, which had thought him a model foreman, refused to take him back. So Gage went to work at a stable in New Hampshire, drove coaches in Chile and eventually joined relatives in San Francisco, where he died in May 1860, at age 36, after a series of seizures.

Known as "The American Crowbar Case" (though it was a tamping rod, not an actual crowbar that went through the man's face and skull), Gage became a scientific sensation. Despite the obvious massive brain injury he suffered, he was not instantly killed. In fact, he regained consciousness pretty quickly, and stood up and walked around within a few minutes.

Later, doctors said he was seen to be throwing up, some of which included brain matter that had leaked out and dripped down his throat. Yet his mind was deemed clear and sharp, though his body kept twitching oddly.

Gage's recovery fascinated doctors of the time period. He would go through periods of total normality, only to wake up the next day and forget half his family and loved ones. This turned out to be due to an infection that set in from the wound. Once it was cleared out surgically, he recovered. He then went back to work and regained his normal life.

There was only one real issue as far as anyone could see, and that was a massive change in personality, not unlike what we today would associate with CTE. His sudden decline into epileptic seizures, emotional outbursts and memory loss about a decade after the accident also sounds right out of the CTE playbook.

So why was this talked about in Stranger Things? Perhaps to show how someone can survive a horrific trauma, but not return to their true self. Hm... doesn't sound too far off from Will Byers...

More like this
Here's How To Vote For The Next 'American Horror Story' Theme Among 6 Options
By Cianna Garrison
These Tweets About Regé-Jean Page Leaving 'Bridgerton' Are Royal Bummers
By Cianna Garrison
In 'Riverdale' Season 5, Toni Topaz Is The Black Superwoman Without A Cape
By Erika Hardison
Stay up to date