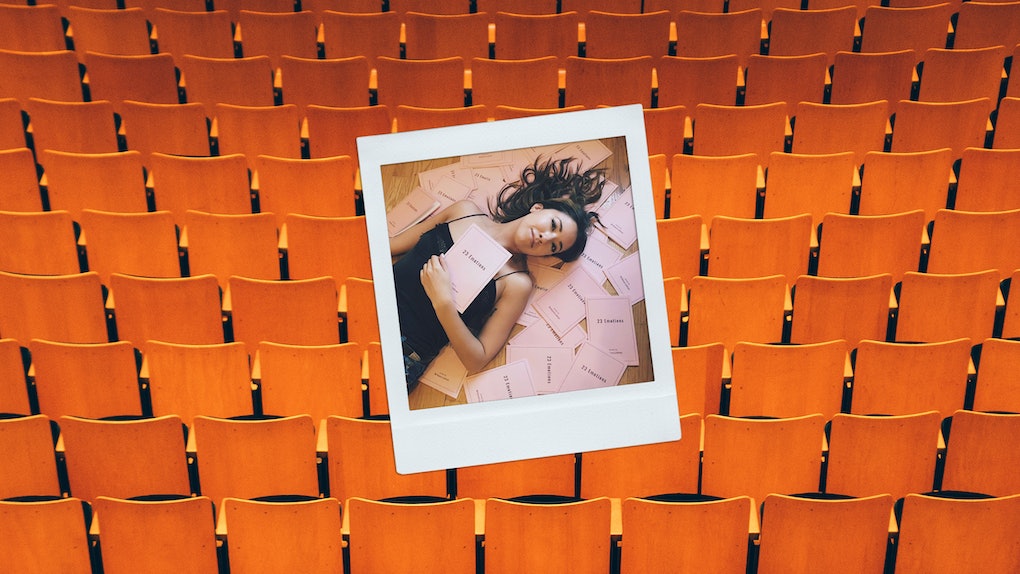 I love being in front of an audience. As a true-to-form Aries sun, Leo rising, I've done everything — given hour-long speeches with ease, gone on TV to promote Elite Daily, worked as a full-time singer and dancer, and more. Although I have always been fairly comfortable in front of an audience, nothing has ever ripped apart my confidence or shaken me to my core the way performing poetry does. The first time I tried reading my poetry out loud, I was practicing in front of my boyfriend and couldn't even get through a few stanzas without crying and having a total freak out, even though it was just us in the room.

After I started putting my poems out into the world, I knew I'd eventually have to confront my fear of reading them in front of an audience. At first, I was expecting it to be a breeze. Compared to the type of presentations I was used to, this was generally a low lift, performance-wise. All I really had to do was stand up, read from a paper, and sit down. I didn't even have to memorize anything! But I quickly realized that poetry is the most personal form of art I've ever worked in.

When I started writing my poetry book, 23 Emotions, last year, I had to make the decision to tap into a lot of things floating around in my mind that I would never dare say out loud. And although the general rule of poetry (if you can remember from high school!) is "never assume the speaker is the author," that's just not the reality of how your words are perceived in front of an audience. If I'm reading a poem about abuse, the reader automatically assumes it's about me, it's just the nature of the game. Knowing that my work could be interpreted as a personal horror that happened to me made it that much more intimidating. A lot of my poems are true stories of things that I've experienced in my life, but I didn't know if I was ready to reveal everything to the world just yet.

With poetry, though, everything is about me. I am the concept creator, the writer, and the performer.

For me, writing and performing poetry is so hard because it's the art I care about the most. If I'm dancing on stage, it's to someone else's choreography; if I'm singing a song at my job, it's someone else's lyrics. All I had to do then was show up, smile, do my part, and walk off stage. With poetry, though, everything is about me. I am the concept creator, the writer, and the performer. They are my words, so why wouldn't the audience hang on to each one and relate them back to me?

The concept of 23 Emotions was born after I saw a popular internet list of the same name. The viral article shares a list of non-English words that capture very specific emotions all humans feel but never had a common word for. The list features words like jouska: "a hypothetical conversation you play out in your head," and liberosis: "the desire to care less about things." Each of my 23 poems in the book are inspired by the words on this list. There are poems about everything from wondering what my father would've thought about Donald Trump if he were still alive, to what it felt like to take ownership of my Mexican identity for the first time.

Like writing itself, it's so much better once you've done it, once it's over, and once a bit more practice is under your belt.

When I planned to read at my book's launch party in Brooklyn at the end of 2018, I had no idea if I would burst into tears in front of everyone, or if I would kind of just disassociate in order to get it over with. Turns out, it was a mix of both. When I got to the microphone stand, I noticed my hands visibly shaking as I clutched my book to read on stage. I had to take a deep pause while performing a poem I knew mostly by heart because the impact of saying these things out loud — and in front of an audience — overwhelmed me so much. But when it was over, I had such a feeling of beautiful joy of having done it in the first place. I had such sweet relief that it was over. Like writing itself, it's so much better once you've done it, once it's over, and once a bit more practice is under your belt.

After my performance, some people came up to me and said "I had no idea that happened to you." Those comments make it really difficult to perform because I'm not revealing things to get sympathy; I'm simply trying to find a place where my art fits. Even worse, a few people went up to my boyfriend and asked him how he felt about me reading love poems, or as the people asking him put it, "poems about you." It felt awful to have my work totally reduced to what my male partner thought, especially when certain poems weren't even about him. That's something I'll always have to deal with in poetry, though. I can't change how the reader perceives my work, and that's also part of the magic of it all. For every four people who respond to my work in relation to what my boyfriend may think, there's one person who is really moved by it, and who needed to hear what I had to say in that moment. That's what ultimately makes it worth it to me.

I've performed my work a few more times since that first book launch, and it still hasn't gotten any easier. I even introduced a poet last weekend — and didn't even have to read my work at all — and still trembled as I got on stage. I know it'll only get better if I keep doing it, but I'm also trying to be OK with how hard it is for me right now. I know my overwhelming nerves come from my absolute devotion to the craft. I still tremble when I introduce a poet in a room of poets because I'm so damn grateful to be there in the first place. I can't believe I am even considered a poet at these events, even though my book has been out and in stores for several months now.

I think it's true when "they" say doing something that scares you is how you grow. I think if something scares you, it means you really care about it, and to even have one thing that you care about that much is a precious gift that you should always hold on to.

More like this
Bella Thorne's "Phantom" Reveals The Lessons She's Learned About Healthy Relationships — EXCLUSIVE
By Brandy Robidoux
The Netflix Reality Show You Should Watch, Based On Your Zodiac Sign
By Chelsea Jackson
Each Zodiac Sign Has A Lucky Day Of The Week That Goes With It & Here's Yours
By Chelsea Jackson
Stay up to date