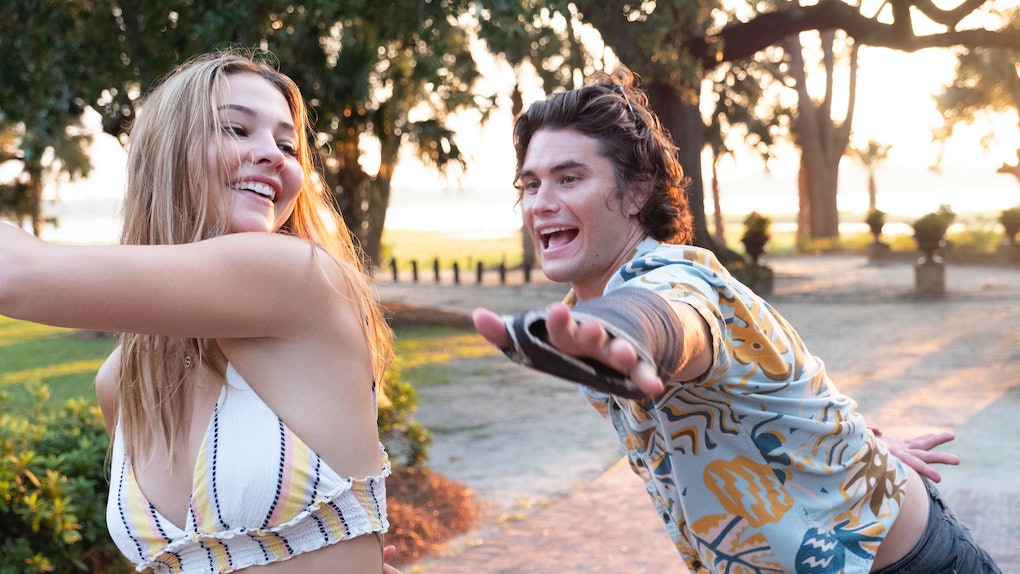 Go into your closet and put on a tropical shirt ASAP, because your fave Netflix show is coming back. That's right, Outer Banks Season 2 was confirmed on July 24. And bonus: The renewal announcement also revealed a key piece of info about what's to come in the show's sophomore season.

Warning: Spoilers for Season 1 of Outer Banks follow. Season 1 of Outer Banks premiered on April 15, 2020, and it was immediately a huge hit with fans, so the renewal isn't too surprising. It told the story of North Carolina teen John B. Rutledge (Chase Stokes) who — after his father went missing trying to find a $400 million treasure — set out to find the treasure with his friends (aka the "Pogues"). There was relationship drama, clashes with the wealthy high school teen group the "Kooks," and even some love triangles. It was a lot to take in.

At the end of the season, fans saw John B. and Sarah (Madelyn Cline) getting rescued after sailing into a tropical depression to evade cops who thought they killed Sheriff Peterkin — but in reality the pair were set up by Ward Cameron (Charles Esten). Things were looking up, but there were still so many questions left unanswered. Would Ward get put away for the terrible things he's done, or would he pay off the new Sheriff? Is Barry blackmailing Rafe after learning he was the one who murdered the old Sheriff? These were just some of the things circling fans minds.

Luckily, answers to those looming questions are on the way. The announcement that a second Outer Banks Season was picked up came via the show's Instagram early on July 24. "see you in the bahamas ✌️" the caption read.

As expected, it seems the series will pick up with John B. and Sarah as they head to the Bahamas in the rescue boat that picked them up. And although there's a new tropical location for the series, the rest of the North Carolina characters aren't necessarily out of the picture. “There would be a couple episodes that take place, at least partially, in the Bahamas,” series co-creator Jason Pate told USA Today in April when he was asked about Season 2. “It unfolds into a bigger mystery. We keep our old villains and we add some new ones. But it always comes back to the Outer Banks.”

Like many fans, the series' actors are also pumped to take on Season 2.

Pate also told USA Today that he envisions Outer Banks having four seasons, so if all goes well, this might just be the start for the franchise. That's definitely something worth celebrating, so maybe go grab yourself a tiny drink umbrella to go along with that tropical shirt and prepare to catch Outer Banks Season 2 (release date pending) in the Bahamas.