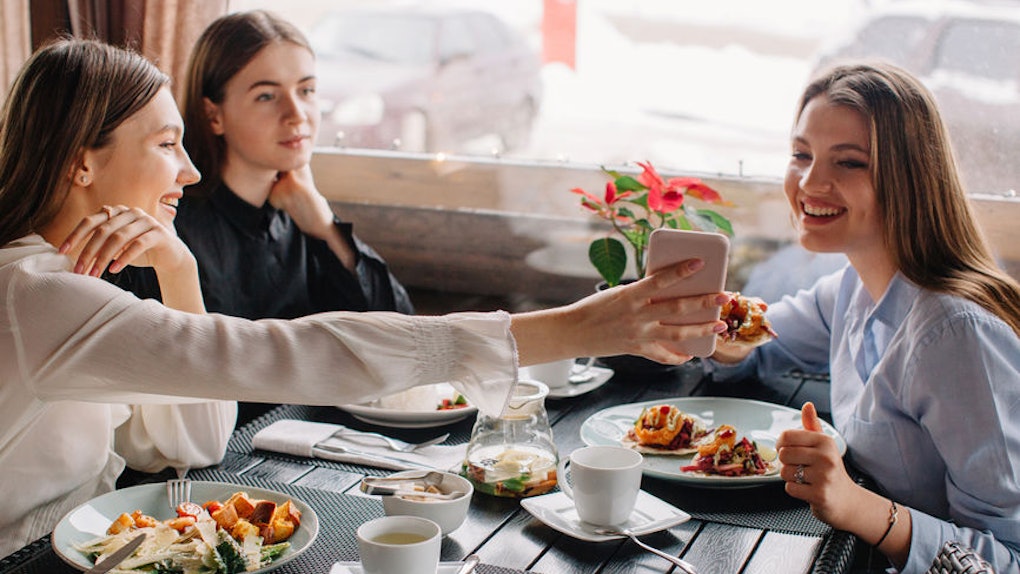 I don't know about you, but I live for brunch and would die for brunch. I love waking up slightly late on a weekend, meeting up with friends while the neighborhood is bustling with activity, and choosing from a menu filled with lunch and breakfast options, not to mention perfectly crafted brunch booze selections. That's why I was so stoked when OpenTable dropped an analysis of the best brunch restaurants in the U.S., because OpenTable's 100 Best Brunch Restaurants in America for 2019 will help me and other brunch-lovers all over the country step up their brunch game in a major way.

To determine the best brunch restaurants in America, OpenTable analyzed diner reviews collected between March 1, 2018 and February 28, 2019. According to a press release, the company looked at overall diner rating, user clout, total number of reviews, and overall regional rating to determine an overall score for the restaurant. Then, OpenTable combined that data with the sum of "brunch" tags on those restaurants and voila! A rating was generated.

Though 100 restaurants were rated against other restaurants in the U.S., the top 100 weren't ranked among themselves, just listed in alphabetical order on OpenTable's released list. The list includes restaurants from all over the country and places that serve all different kinds of food, and you can find the full list of 100 of the hottest brunch spots here. To get you started, here are 10 of OpenTable's top 100 brunch restaurants that you can hit up for your next brunch outing.

If you're looking for a swanky brunch spot in Los Angeles, Catch LA is where you want to be. The West Hollywood seafood restaurant's brunch menu features a raw bar and hand rolls for adventurous brunchers, as well as a classic brunch menu with omelettes and pancakes for those who like to keep things simple.

If your definition of the perfect Sunday morning is a walk in the park followed by a hearty meal, Tavern On The Green in New York City is the perfect brunch option for you. The restaurant is situated within the west side of Central Park and features mouthwatering weekend brunch options like fruitwood smoked salmon, avocado poached eggs, and brioche french toast.

Suraya was voted the "Best New Restaurant of 2018" by Philadelphia magazine and it's not hard to see why. The Lebanese-inspired brunch dishes include a Lebanese flatbread called Man'oushe, a strained yogurt served with pita called Labne, and sandwiches with kebab and falafel.

Little Goat Diner in Chicago might be called a diner but it's likely different from any run-of-the mill diner experience you've had before. The restaurant's all-day breakfast menu includes takes on food from all over the world, including Paratha's Burrito made with Indian flatbread and avocado-bean salad; Okonomiyaki, which is an Osaka street food made with pork belly; and a dish called "This Little Piggy Went To China," featuring sichuan pork sausage. Little Goat Diner sounds so good I might literally buy a plane ticket to Chicago right now.

Looking for a classic Southern bite? Head to Willa Jean in NOLA for your fill of shrimp and grits, corn bread, and fried chicken. Of course, it would be remiss of you to pass up on the French-inspired food in New Orleans, and Willa Jean's menu contains plenty of that, too.

If you're looking for an extensive American brunch menu with an Austin flair, don't miss Chez Zee in Texas' capital. You can get Southern food, Mexican food, kid-sized meals, and choose from lots of excellent brunch beverages.

Lola is a chic brunch restaurant near Seattle's waterfront that features delicious Greek and Mediterranean-inspired dishes including Mediterranean octopus, Greek yogurt, and Turkish fig-lemon scones, not to mention kebab dishes, Meze (which are like Mediterranean tapas or appetizers), and house-made cocktails.

For a truly unique dining experience in Florida, head to Oxford Exchange which describes itself as either "a large house, or a small town." The restaurant offers simple, seasonal American fare, but the space also includes a bookstore, a work and study area, and space for private events. It's the perfect place if you want to spend the whole day out, dining, shopping, and getting stuff done.

The Henry in Phoenix is the perfect Southwestern spot for those craving some upscale, American brunch. With brunch menu items like "Caramel Apple French Toast," "Chicken Fried Chicken," and the "Quinoa Breakfast Burrito," there's a little something for everyone at this neighborhood spot.

Just around four miles from Washington, D.C, Ambar is the perfect restaurant for those craving something unique. Ambar features Eastern European dishes all day and has an extensive brunch menu. Plus, guests can pay $44 to get unlimited plates — with that, brunch drinks cost only 25 cents.

Make sure to check out OpenTable's full restaurant list for additional top brunch restaurants close to you. Happy eating!