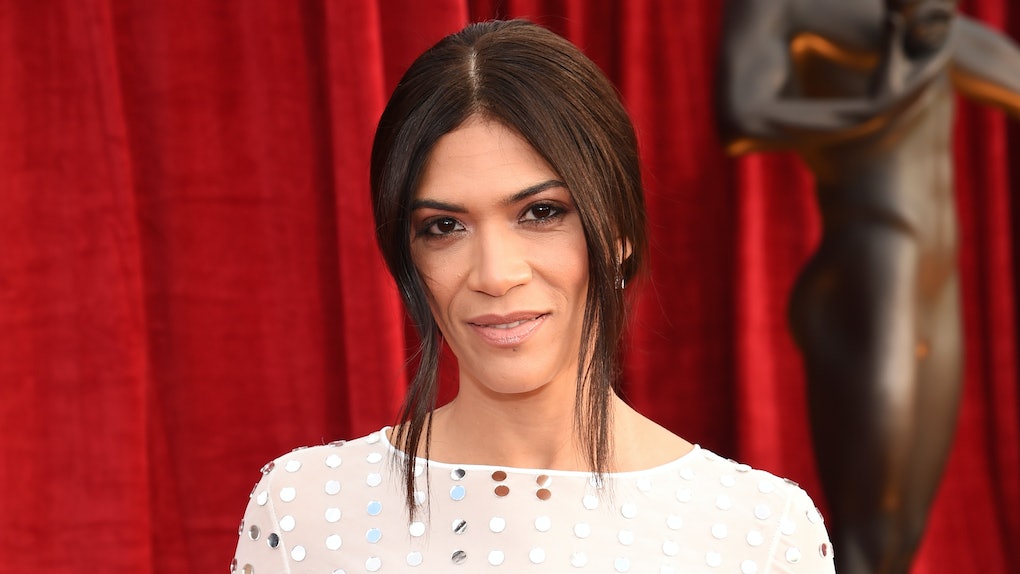 The seventh and final season of Orange is the New Black expanded the world of the show beyond the prison system to also highlight the poignant topic of immigration in the United States. At the end of Season 6, Laura Gómez's character Blanca Flores was moved from Litchfield Penitentiary to an ICE detention center, giving the following season the opportunity to highlight the reality for thousands of people in the United States. And while her character went through one type of immigrant experience on the show, Gómez has been amplifying the voices of real-life immigrants like herself through social media. Laura Gómez tells real-life immigrants' stories on-screen and off, and she sat down with Elite Daily to talk all about it.

In Season 7 of the hit Netflix series Orange is the New Black, Blanca served as the audience's window into the experience of detained immigrants. It's something that is very real for a growing number of people in the United States, and the subject is particularly impactful for Gómez, since she is an American immigrant from the Dominican Republic.

"I felt, in a way, it was an interesting way of working around my anxieties at the moment," Gómez tells Elite Daily. "This is affecting us one way or another. I thought it was a wonderful way for me to canonize all this and to find a place to put it. And we all knew we had a big responsibility. And both the showrunners and the writers were giving us an opportunity to make an impact and we took that very seriously. And I took it very seriously with Blanca."

I felt this could be my way of humanizing us and giving a little profile of a journey of an immigrant and a positive impact in American society.

Partly inspired by her work on Orange is the New Black, Gómez wanted to reach out to her audience to tell more immigrant stories. Only, instead of talking about fictional characters, she wanted to highlight the experiences of real-life immigrants like herself and the people she knows and loves. Now, Gómez's posts on Instagram using the hashtag #ImmigrantStoriesByLauraGomez have become her collection of profiles on real-life immigrants.

"I just had a feeling that this was a way to use my platform, which has been amplified by this show to comment on positive aspects of immigrants, they way I know it, the way I experience it," Gómez explains. "I felt this could be my way of humanizing us and giving a little profile of a journey of an immigrant and a positive impact in American society."

In each post highlighting an immigrant to America, Gómez includes a photo and blurb detailing the person's accomplishments. She's included actors, LGBTQ activists, novelists, musicians, entrepreneurs, and more. One of her most memorable posts was her friend's 11-year-old son Amaru, who competed in the National Spelling Bee.

"I just find him very inspiring because he is in that generation that could actually make an impact on the future. Generation Z will have a much more tolerant view of the world. For me, he represents hope," Gómez says.

Right now, each immigrant story is from someone who Gómez knows personally, but she says the project might expand to other people at some point in the future. No matter what, though, she plans to continue to use storytelling as a tool to bring people together and help foster empathy.

Now that Orange is the New Black is over, Gómez is focusing her professional energy on writing and directing her own work, including an original screenplay based on a play she wrote. She's also part of a women's writer's group that "has been a wonderful space to remember how important it is for women and people of color to also tell our stories." And through it all, Gómez will continue to share #ImmigrantStoriesByLauraGomez, to make sure the positive immigrant experience is amplified.