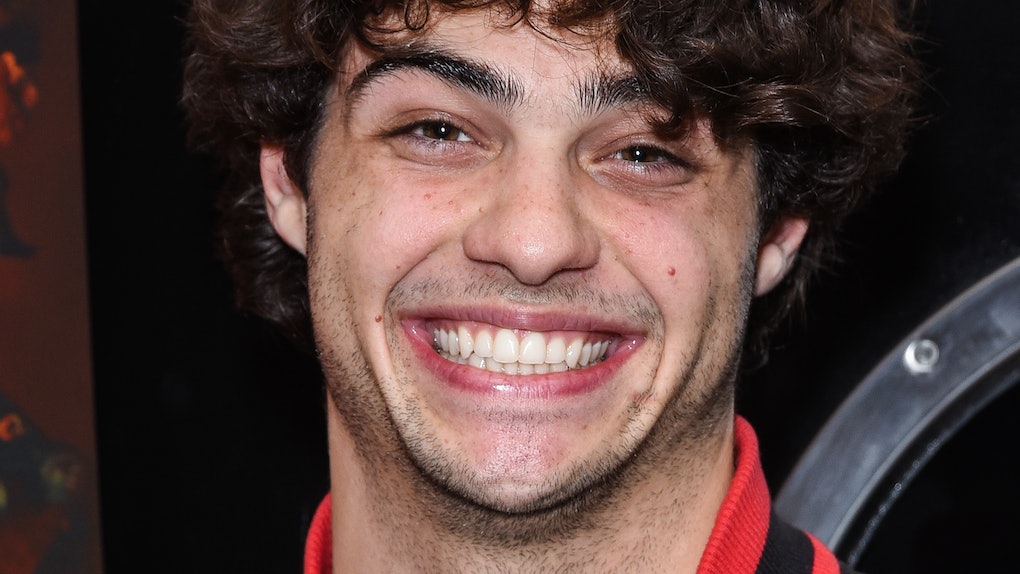 There are a few celebrity hair moments in Hollywood that have helped to shape history. There's "The Rachel" made famous by Jennifer Aniston's character in Friends that sparked a worldwide hairstyle trend in the mid-1990s Then, there was the time that Britney Spears shaved her head in 2007. Well, now, Sunday, Sept. 15, 2019 marks the day that Noah Centineo debuted his bleached beard and shocked fans everywhere.

That's right, just as the 23-year-old started to gain traction as one of America's biggest heartthrobs (do people still use that word?), major celebrity crushes, and all around beloved actor, he went and did something as wild as bleach his beard. I mean, have you seen To All the Boys I've Loved Before? If yes, did you swoon? Probably. So just picture Peter with a beard that is as blonde as Eminem's Slim Shady days circa 1999. You know, the look that was complete with a peroxide-induced blonde crew cut. Can you picture it? No? Me neither.

OK, maybe I'm being dramatic, but Centineo really did bleach his beard, and to say that fans are shocked (and borderline crying) over it is an understatement. On Sept. 15, the actor took to his Instagram stories to reveal the new beard, complete with the text "What's happened." What's happened, indeed, Noah.

Centineo then went on to post additional Instagram stories claiming that he didn't bleach his beard. “I didn’t bleach my beard, that would be ridiculous. Why would I do that?” he said in the clip. But like, who are you lying to, Noah? Your fans or yourself? IDK, you guys, my heart just seriously can't take anymore.

Maybe we should give him the benefit of the doubt and briefly toy with the idea that he isn't lying and this new blonde beard is, in fact, a faux facial hair piece. I mean, do I really believe that? Not really. But who knows? Stranger things have happened. Regardless, I'm hoping (praying) that this new, um, alteration to his look is for professional reasons (AKA a new role).

As all fans are probably well aware, Centineo is in the process of filming To All The Boys I Loved Before 3, the third and final film in the Netflix series. But could that role possibly demand that the actor bleach his beard? Not too sure, unless the story line includes Peter wanting to see what he looks like as a blonde? But let's be honest, I guess, at this point, anything is possible.

In case you somehow forgot (???), here's what Centineo looked like pre-bleach:

According to IMDb, Centineo may also be in pre-production for the 2021 film Masters of the Universe, in which he will star as He-Man, the most powerful man in the universe that must go against the evil Skeletor to save the planet and protect the secrets of Castle Grayskull. Could this new light-hued beard be a product of his role as He-Man? Either way, I guess when the shock wears off, I, along with the rest of his fan base, will calm down and respect the fact that bleaching his beard was likely a professional move. But until then, I'll just stare at pictures of the old Noah.

More like this
Lucy Hale Debuted Blonde Hair & Looks Like A Whole New Person
By Margaret Blatz
Jackie Aina Is Cutting Ties With Morphe — Here's Why
By Margaret Blatz
When Does Tati Beauty's Second Product Launch? Something New Is Coming
By Bella Gerard and Theresa Massony
Stay up to date