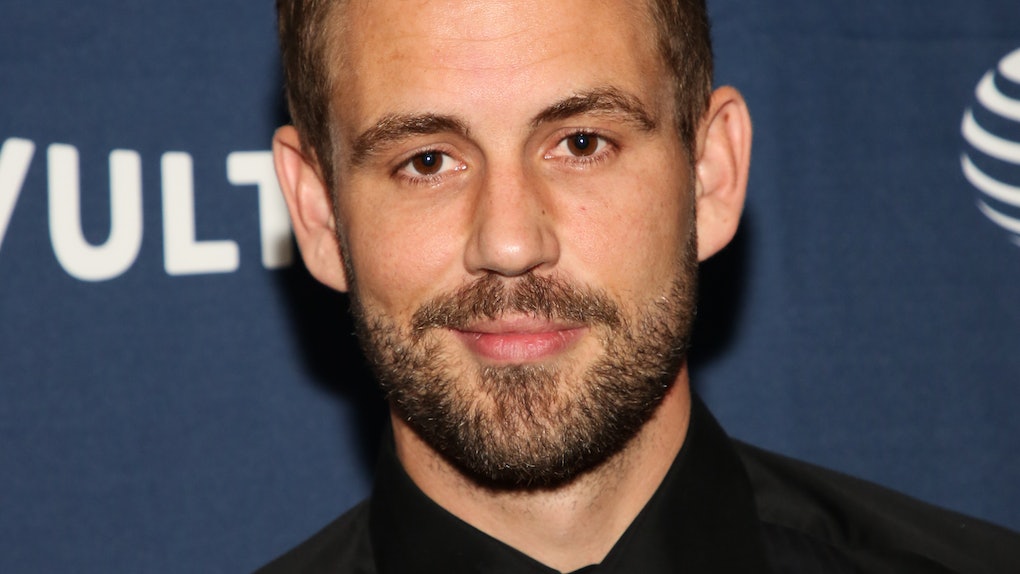 Sorry to any Bachelor Nation fans who may have been hoping for more, but Nick Viall's reaction to Demi Burnett dating rumors makes it clear the two are just friends. While he's already briefly addressed the rumors during a Nov. 10 interview with Us Weekly, Viall chose to set the record straight in more depth during a Nov. 13 episode of his podcast, Viall Files. In the episode, he explained that the rumors began because someone in his apartment building has been spying on him and leaking information about his personal life to Reddit.

“I’ve been violated,” he began. “We’ve talked about Reddit before on the show. I’ve tried not to go on. I haven’t been on it in some time... But I do have friends and an occasional fan who reads and they brought it to my attention that I now live with someone in my intimate building — it’s a building in Venice and there are six units — and I live with someone whose been spying on me.”

Apparently the spy (so creepy, I know) saw Burnett going to Viall's place and totally misinterpreted the situation. “Demi is a close friend, a dear friend. We’ve become close and I care very much about her," Viall said adding that she's been to his house a few times, though they've never hooked up.

“Demi has in fact been to my place, as sometimes friends do go to each other’s places," he explained. I'd love to think there was something more scandalous going on here, but, alas, it doesn't seem like there is.

As I mentioned earlier, this isn't Viall's first time denying rumors that anything romantic is going on between him and Burnett. “I’m not dating Demi,” he told Us Weekly point blank on Nov. 10.

In the same interview with Us Weekly, Viall also addressed rumors that he's dating Rachel Bilson by saying that she's just "a friend."

So maybe Viall is just... dare I say it... a single straight dude with a bunch of platonic female friends?

This article was originally published on November 14, 2019