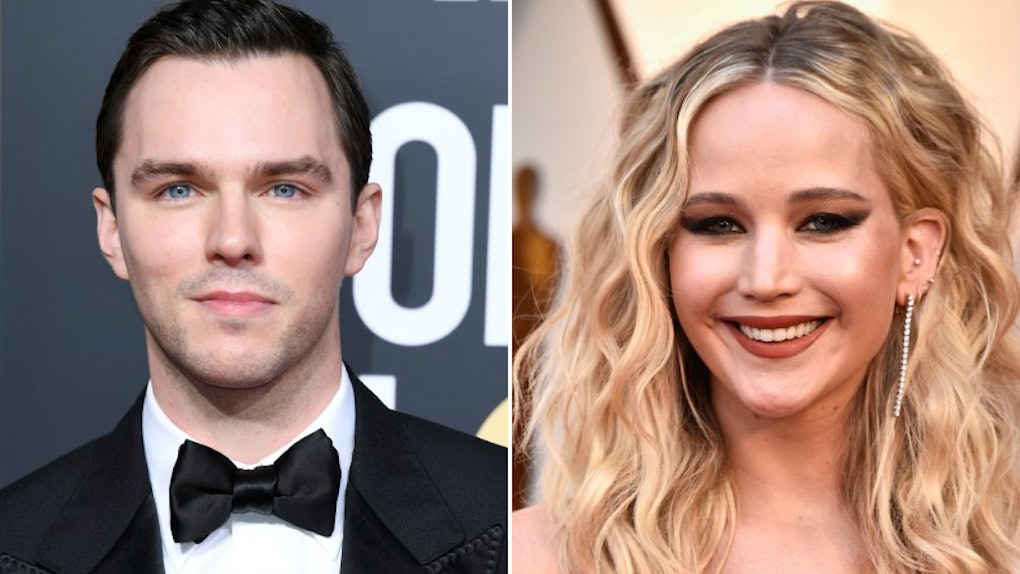 Nicholas Hoult's Comments About Jennifer Lawrence Post-Breakup Are So, So Mature

It’s been nearly five years since Nicholas Hoult and Jennifer Lawrence were an item. And in those five years, Hoult has moved on and even had a child. But moving on hasn’t stopped Hoult from opening up about his time with Lawrence. Part of his willingness to talk about the relationship is the fact that the two are both starring in Dark Phoenix, the next installment in the X-Men series. In a recent interview with ES Magazine, Hoult described what it’s like to work with Lawrence again. And you know what? Nicholas Hoult’s comments about Jennifer Lawrence post-breakup show just how mature the two stars really are.

“It’s pretty similar to Skins, we’re a big family, we’ve been doing those movies since we were 20 years old,” Hoult said of working with his ex. “As much as the Skins crowd grew up together, the X-Men crowd really grew up together. It’s been a good eight, nine years making those movies. We’ve all got to get along, we’ve all got to have fun. The really beautiful thing about this last film is that [writer and director] Kim Berger has given me somewhere nice and new to experiment and go with the character. Which is cool.”

So, his comments aren’t giving away much in the way of details, but at least he described the situation in a mature, respectful manner. There’s no doubt that Lawrence feels the same way when it comes to work — it’s more about the work than it is about personal drama, anyway. That’s a good sign, I think!

Hoult and Lawrence first met when they filmed 2011’s X-Men: First Class. They dated for five years before finally calling it quits in August 2014. In a November 2015 interview with Vanity Fair, Lawrence opened up about the split.

“These movies had been my life for so long and they had to come first in everything,” she said. “I was also in a relationship with somebody for five years and that was my life. So my life was this person and these movies and we broke up around the same time that I wrapped those movies. Being 24 was this whole year of, ‘Who am I without these movies? Who am I without this man?’”

Lawrence has since moved on. She briefly dated Coldplay-frontman Chris Martin and was attached to director Darren Aronofsky for a while before splitting with him in 2017. And, of course, Hoult has moved on with American model Bryana Holly, with whom he shared a son. Hoult actually opened up to ES Magazine about that relationship as well and even talked about what it’s like to be a first-time dad.

"Having a baby puts you in this place where you go, 'Oh, OK, this human is going to change a lot,'" he said of being a dad. "It makes you value time differently, which is why I talk very quickly in interviews now, because I need to get home to them."

As fun and fulfilling as fatherhood is, though, Hoult says it’s also tiring.

"The levels of tiredness are extreme," he explained. "No one warns you about it! But the level of love that comes with it outweighs everything. It’s phenomenal. I’m loving it. And it evolves all the time. They change so much, every day is different. It fills you up as a human completely."

Well, it seems like Hoult is loving every second of fatherhood, tiredness and all! It’s nice to see him so happy.