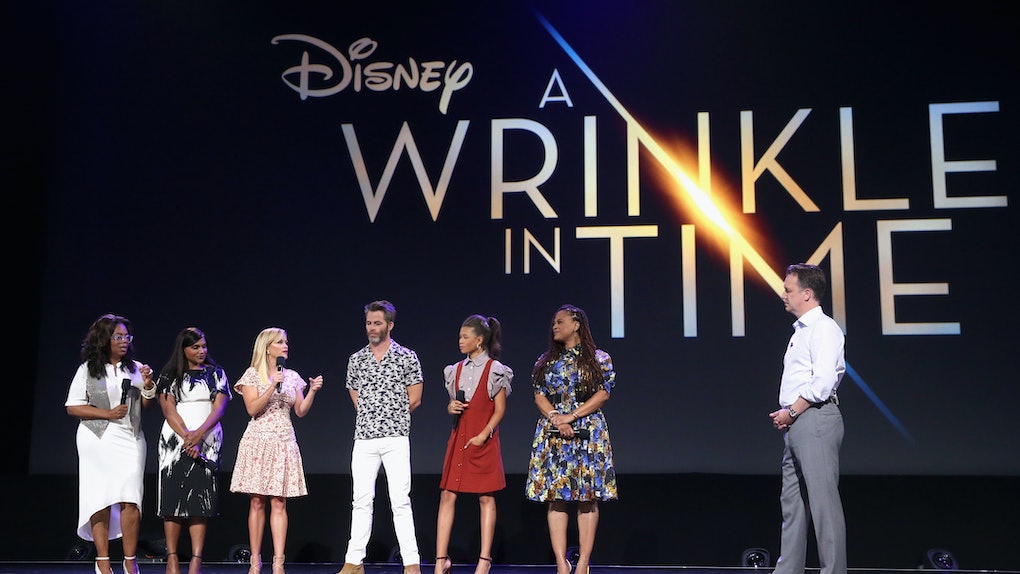 New 'A Wrinkle In Time' Character Posters Are So Stunning, They'll Make You Gasp

Sci-fi nerds everywhere probably had their first exposure to the genre through the classic 1962 book A Wrinkle in Time. Madeleine L'Engle's story about 13-year-old Meg searching across dimensions for her father will appear in a long-awaited Disney adaptation on March 9. The film, directed by Selma's Ava DuVernay, has boasted huge potential since news of it first broke. Now, with less than two months until its premiere, A Wrinkle in Time character posters have now been released, and they are absolutely stunning. Do we really have to wait until March for this movie?

Featuring a stellar cast that comprises of Oprah Winfrey, Mindy Kaling, Reese Witherspoon, and Chris Pine, A Wrinkle in Time also includes screenwriter Jennifer Lee, who wrote and co-directed Frozen. If you've managed to miss out on DuVernay's epic career the past few years, she has quickly become one of the strongest voices in the film industry, particularly for black women. Her past projects include creating the series Queen Sugar, directing the documentary 13th, and even directing a 2013 episode of Scandal. Basically, if anyone was going to work on the girl-power classic of A Wrinkle in Time, it had to be DuVernay.

Both DuVernay and the movie's Twitter account shared intimate photos of six characters, first posting portraits of the Mrs.'s trio, aka Mrs. Whatsit, Mrs. Who, and Mrs. Which. I still can't keep those names straight, but knowing that Witherspoon plays Whatsit, Winfrey is Which, and Kaling plays Who helps.

On her personal account, DuVernay posted each photo alongside quotes by the poet Rumi. NBD, but I want to emulate her Twitter style and get away with posting 13th century poetry.

If Witherspoon's introduction of Winfrey at the Golden Globes is any inclination, it's clear that Winfrey is just as much as of a goddess in this movie as she is in real life. Witherspoon and Kaling look equally ethereal as these characters. The trio's celestial makeup is perfect for their otherworldly characters, and I'm already anticipating a makeup brand releasing a Wrinkle in Time-inspired collection in time for the movie's launch.

BRB, I'm weeping over this quote alongside Meg's photo. We are all jars packed with wisdom and beauty — Ava DuVernay said so. Also, three cheers for a glasses-wearing protagonist.

Comparing these two sets of photos, I have so many questions. Why are the Murrys' eyes open and the Mrs.'s closed? Is it because the family isn't used to a world with tesseract travel? Are the women blind to the reality of their world? I need answers!

Such beautiful photos only emphasizes to me that this film is going to be at an epic level. Winfrey even said in a TIME feature about the movie that she believed "we were making the new Wizard of Oz for another generation." DuVernay's efforts to hire a multifaceted cast also suggests that the film will attract a huge audience:

I wasn’t just casting for actresses. I was casting for leaders—icons. Reese is the hottest producer in town. Oprah's the most prolific, venerable legend of television and an artist and entrepreneur. And Mindy's one of the few women running a show with her name, about her. When I think about the three of them together as a unit of celestial beings, it feels right.

Likely to be the latest example of "adorable child star who is wise beyond her years," Reid's interpretation of the story's message will make your inner English major swoon:

[The movie is] about knowing that you're going to go through dark spaces in your life. You're not going to be perfect, but the most important thing is not trying to please anybody. It's loving yourself inside out.

I'm even more excited for this film now. If you're looking for me, I'll be playing the Wrinkle in Time trailer on a loop until March 9.